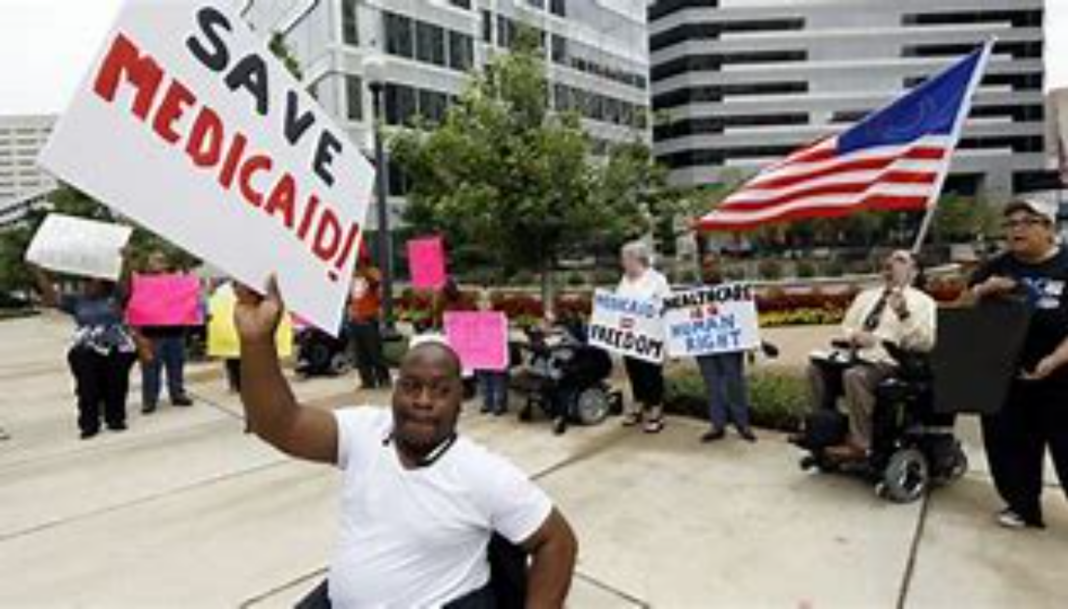 There are more than 2 million people across the United States who have no option when it comes to health insurance. They’re in what’s known as the “coverage gap” — they don’t qualify for Medicaid in their state, and make too little money to be eligible for subsidized health plans on the Affordable Care Act insurance exchanges.

Briana Wright is one of those people. She’s 27, lives near Jackson, Miss., works at McDonalds, and doesn’t have health insurance. So to figure out her options when she recently learned she needed to have surgery to remove her gallbladder, she called Health Help Mississippi, a nonprofit that helps people enroll in health insurances.

Because she lives in Mississippi, “I wasn’t going to be eligible for Medicaid — because I don’t have children [and] I’m not pregnant,” she tells NPR. When she had her income checked for Healthcare.gov, it was just shy of the federal poverty line — the minimum to qualify for subsidies. “It was $74 [short]. I was like, oh wow,” she says.

Wright’s inability to get a subsidized policy on Healthcare.gov is related to how the Affordable Care Act was originally designed. People needing insurance who were above the poverty line were supposed to be funneled via the federal and state insurance exchanges to private policies — with federal subsidies to help make those policies affordable. People who were under the poverty line were to be funneled to a newly-expanded version of Medicaid — the public health insurance program that is jointly funded by states and the federal government. But the Supreme Court made Medicaid expansion essentially optional in 2012, and many Republican-led states declined to expand. Today, there are 12 holdout states that have not expanded Medicaid, and Mississippi is one of them.

So, Wright is still uninsured. Her gallbladder is causing her pain, but she can’t afford the surgery without shuffling household bills, and risking leaving something else unpaid. “I’m stressed out about it. I don’t know what I’m going to do,” she says. “I’m going to just have to pay it out of pocket or get on some payment plan until it all gets paid for.”

Hoping to finally find a fix for Wright and the millions like her who are in Medicaid limbo, several teams of Democratic lawmakers have recently been hashing out several options — hoping to build on the momentum of the latest Supreme Court confirmation that the ACA is here to stay.

The COVID-19 relief bill passed in March included financial enticements for these 12 states to expand Medicaid. Essentially, the federal government will cover 90% of the costs of the newly eligible population, and an additional 5% of the costs of those already enrolled.

It’s a good financial deal. An analysis by the nonprofit Kaiser Family Foundation estimates that the net benefit for these states would be $9.6 billion. But, so far — publicly, at least — no states have indicated they intend to take the federal government up on its offer.

“If that is not getting states to move, then that suggests that the deep root of their hesitation is not about financial constraint,” says Jamila Michener, a professor of government at Cornell University and author of the book Fragmented Democracy: Medicaid Federalism And Unequal Politics.

Instead, Michener says, the reluctance among some Republican-led legislatures and governors to expand Medicaid may be a combination of partisan resistance to President Obama’s signature health law, and not believing “this kind of government intervention for these groups of people is appropriate.”

What’s Next: When asked about progress on this front in an April press briefing, Biden’s press secretary Jen Psaki said “the President is certainly supportive of — and an advocate for — states expanding Medicaid,” but did not answer a follow up about whether the White House was directly reaching out to governors regarding this option.

OPTION 2: Create a federal public option to fill the gap

Some have advocated for circumventing these holdout states and creating a new, standalone federal Medicaid program that people who fall into this coverage gap could join. It would be kind of like a tailored public option just for this group.

This idea was included in Biden’s 2022 budget, which says, in part: “In States that have not expanded Medicaid, the President has proposed extending coverage to millions of people by providing premium-free, Medicaid-like coverage through a Federal public option, paired with financial incentives to ensure States maintain their existing expansions.”

But it wouldn’t be simple. “That can be quite complex — to implement a federal program that’s targeted to just these 2.2 million people across a handful of states,” says Robin Rudowitz, co-director of the Medicaid program at the Kaiser Family Foundation, who wrote a recent analysis of the policy options.

It also may be a heavy lift, politically, says Michener. “Anything that expanded the footprint of the federal government and its role in subsidizing health care would be especially challenging,” she says.

What’s next: This idea was raised as a possible solution in a letter last month from Georgia’s Democratic senators to Senate leaders, and Sen. Raphael Warnock said this week he plans to introduce legislation soon.

OPTION 3: Get around stubborn states by letting cities expand Medicaid

Instead of centralizing the approach, this next idea goes even more local. The COVER Now Act, introduced by Rep. Lloyd Doggett, D-Texas, would empower local jurisdictions to expand Medicaid. So, if you live in Austin, Texas, maybe you could get Medicaid, even if someone in Lubbock still couldn’t.

The political and logistical challenges would be tough, policy analysts say. Logistically, such a plan would require counties and cities to create new infrastructure to run a Medicaid program, Rudowitz notes, and the federal government would have to oversee how well these new local programs complied with all of Medicaid’s rules.

“It does not seem feasible politically,” Michener says. “The legislators who would have to vote to make this possible would be ceding quite a bit of power to localities.” It also might amplify geographic equity concerns, she says. People’s access to health insurance would not just “be arbitrarily based on what state you live in — which is the current state of affairs — It’s also going to be arbitrary based on what county you live in, based on what city you live in.”

What’s next: Doggett introduced the bill earlier this month. There’s no guarantee it would get a vote on the House floor and — even if it did — it wouldn’t survive a likely filibuster in the evenly divided Senate.

OPTION 4: Change the ACA to open up the exchanges

A fourth idea, Rudowitz says, is to change the law to remove the minimum cutoff for the private health insurance exchanges, since “right now, individuals who are below poverty are not eligible for subsidies in the marketplace.” With this option, states wouldn’t be paying any of the costs, since the federal government pays premium subsidies, Rudowitz says, but “there are issues around beneficiary protections, benefits, out-of-pocket costs.”

What’s next: This idea hasn’t yet been included in any current congressional bills.

Will any of these ideas come to fruition?

Even with a variety of ideas on the table, “there’s no slam dunk option, it’s a tough policy issue,” Rudowitz says. All of these would be complicated to pull off.

It’s possible Democrats will include one of these ideas in a reconciliation bill that could pass without the threat of a Republican filibuster. But that bill has yet to be written, and what will be included is anyone’s guess.

Even so, Michener says she’s glad the discussion of the Medicaid coverage gap is happening, because it’s sensitizing the public, as well as people in power, to the problem and potentially changing the political dynamic down the line. “Even in policy areas where you don’t have any kind of guaranteed victory, it is often worth fighting the fight,” she says. “Politics is a long game.”