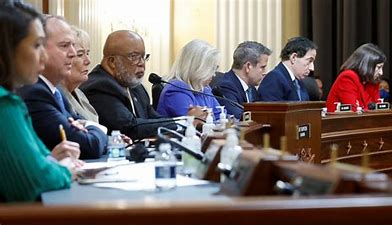 A House panel investigating the Capitol riot took over a chunk of prime-time television Thursday night with the first of a planned six hearings.

The select committee—made up of seven Democrats and two anti-Trump Republicans—previously suggested it would offer huge revelations from its investigation of the riot at the Capitol on Jan. 6, 2021.

In opening remarks, Thompson said Trump oversaw “a sprawling, multistep conspiracy aimed at overturning the election” and that he “spurred a mob” to attack the Capitol with “lies that led to insurrection.”

But conservative lawmakers and organizations called out the partisan politics of Democrats’ programming, which was packaged for a TV audience by a former ABC News producer.

Democrats are so brazen they’ve even hired the former president of ABC News to turn the hearings into ‘made-for-TV’ political theater. You can expect a one-sided partisan narrative intent on slandering the left’s political opponents—starting with former President Donald Trump and extending to other conservatives—that has nothing to do with strengthening our republic and everything to do with distracting from their abysmal failures in every major policy area.

What happened on Jan. 6 was wrong, but unlike the violent riots that did so much damage to our country during the summer of 2020, the events of Jan. 6 were subject to one of the largest investigations in our history. If Speaker [Nancy] Pelosi genuinely cares about justice, and law and order, she should immediately direct committee hearings to investigate the violence, damage, and death caused by Black Lives Matter protests leading up to Jan. 6.

Here are six key takeaways from the two-hour hearing held by the House Select Committee Investigating the January 6th Attack on the Capitol.

Cheney, who called it “a tremendous honor to serve on this committee,” alleged that evidence would show Trump approved of the infamous chant of “Hang Mike Pence,” which some rioters shouted in anger that the vice president didn’t try to throw the election to Trump.

“You will hear that President Trump was yelling and quote ‘really angry’ at his advisers that told him he really should be doing something more” to stop the riot, Cheney said.

“And aware of the rioters’ chant to ‘hang Mike Pence,’ the president responded with this sentiment: ‘Our supporters have the right idea.’”

Trump and his legal team had argued that Pence, presiding over the joint session of Congress as president of the Senate, could choose unilaterally not to count Electoral College votes for Biden. Pence did not go along.

Cheney, noting that a federal judge said the president’s moves evidently broke the law, argued that the riot was part of a larger conspiracy by Trump.

“Donald Trump oversaw and coordinated a sophisticated, seven-part plan to overturn the presidential election and prevent the transfer of presidential power,” Cheney said. “In our hearings, you will see evidence of each element of this plan.”

The Wyoming Republican claimed that Trump “summoned the mob, assembled the mob, and lit the flame of this attack.”

The televised hearing featured a lengthy, roughly chronological compilation of video showing a crowd advancing on the Capitol as Trump spoke at the rally. Footage showed rioters clashing with Capitol Police and breaking into the building that afternoon as the joint session of Congress unfolded, until it was adjourned because of the breach.

Cameras mounted inside and outside the Capitol captured dramatic images of the riot used in the montage, as did documentary filmmaker Nick Quested, one of two live witnesses to appear before the committee Thursday night.

In examples of strategic edits made by the committee, however, the video producers cut the words “peacefully and patriotically” from Trump’s rally remarks on the planned march to the Capitol and, in audio ending the montage, suggested that after leaving office, Trump said he detected “love in the air” during the riot.  In fact, he was referring to the rally just south of the White House that preceded the violence.

A Capitol Police officer’s fatal shooting of one rioter, Navy veteran Ashli Babbitt, was not mentioned during the hearing.

“On the morning of Jan. 6, President Donald Trump’s intention was to remain president of the United States despite the lawful outcome of the 2020 election and in violation of his constitutional obligation to relinquish power,” Cheney said.

To Republican lawmakers who continue to defend Trump, she said, “your dishonor will remain.”

Thompson focused at one point on a Trump tweet on Dec. 19, 2020, more than a month after the election, about the planned rally in Washington. The tweet concluded with these words: “Be there, will be wild.”

“We’ve obtained substantial evidence showing that the president’s Dec. 19 tweet calling his followers to Washington, D.C., on Jan. 6 energized individuals from the Proud Boys and other extremist groups,” Thompson said.

In another video, Marcus Childress, the committee’s investigative counsel, spoke about the Proud Boys, a far-right group whose members said Trump’s tweet encouraged them to travel to Washington.

Extremist groups “viewed this tweet as a call to arms,”  Childress said in the video. He said a plan circulated among Proud Boys members to occupy government buildings as part of  a “1776 Returns” effort, according to the federal indictment of Proud Boys leader Henry “Enrique” Tarrio.

Childress said Tarrio posted the words “Standing by sir,” on the social media site Parler after Trump, challenged by a questioner in one of two debates with Biden, told the Proud Boys to “stand back and stand by.”

The committee also showed a clip of far-right commentator Alex Jones encouraging Americans to go to Washington as he talked with Stewart Rhodes, founder of the antigovernment group Oath Keepers, whose members include former law enforcement and military personnel. In that interview, Rhodes said either Trump would prevail “or we end up in a bloody fight.”

The federal indictment of Rhodes in connection with the riot says that he told followers, “We aren’t getting through this without a civil war.”

The Oath Keepers stored weapons in Virginia before Trump’s  Jan. 6 “Stop the Steal” rally, according to the indictment.

Early on, the committee showed excerpts of its video-recorded deposition of former Attorney General William Barr, who departed the Trump administration about a month before Biden’s inauguration.

Thompson, the committee chair, introduced the first clip of Barr.

“Donald Trump lost the presidential election in 2020,” Thompson said. “Don’t believe me? Hear what his former attorney general had to say about it.”

“I made it clear I did not agree with the idea of saying the election was stolen and putting out this stuff, which I told the president was bulls–t,” Barr said in the video.

The former attorney general said he spoke three times with Trump about the election results.

“I didn’t want to be a part of it. That’s one of the reasons that went into me leaving when I did,” Barr added. “I observed—I think it was Dec. 1—[that] you can’t live in a world where the incumbent administration stays in power based on its view, unsupported by specific evidence, that there was fraud in the election.”

During her opening remarks, which were significantly longer than the chairman’s, Cheney showed another video clip of Barr saying to committee staff:

I saw zero basis for the allegations [of election fraud], but they were made [in] such a sensational way that they obviously were influencing a lot of people, members of the public, that there was this systemic corruption in the system and that their votes didn’t count and that these [voting] machines were controlled by somebody else were actually determining it, which was complete nonsense.

It was being laid out there, and I told them it was crazy stuff. They are wasting their time on that, and it was doing a grave disservice to the country.

Trump, in response to a question, said she believed Barr’s assessment that not enough voter fraud took place to change the election outcome.

A committee staffer asked her: “How did that affect your perspective of the election when Attorney General Barr made that statement?”

The president’s daughter seemed to indicate that she believed the election was not stolen. However, the video clip was brief.

“It affected my perspective,” Ivanka Trump said. “I respect Attorney General Barr. So I accepted what he was saying.”

In another aired video, Cheney interviews Kushner about Trump White House counsel Pat Cipillone, who threatened to resign after the riot at the Capitol.

“Are you aware Pat Cipillone threatened to resign?” Cheney asked.

“Like I said, my interest at that time was trying to get as many pardons done [as possible],” Kushner responded. “I know [Cipollone] and the team were always saying, ‘We’re going to resign. We’re not going to be here if this happens or if that happens.’ So, I kind of took it as just to be whining, to be honest.”

Capitol Police Officer Caroline Edwards, who rioters knocked unconscious by hurling a bicycle-rack barricade at her, gave emotional testimony that didn’t shed new light on potential criminality. She is among about 140 officers injured during the riot.

“What I saw was a war scene, something like I had seen out of the movies,” Edwards, one of two live witnesses in the second hour, told the committee, adding:

I couldn’t believe my eyes. There were officers on the ground. They were bleeding. They were throwing up. I saw friends with blood all over their faces. I was slipping in people’s blood. I was catching people as they fell. … I’m trained to detain a few suspects and handle a crowd. I’m not combat trained.

Quested, a documentary filmmaker who was embedded with the Proud Boys before the riot, also testified to the committee about what he saw. He said he was there in response to a House subpoena.

Edwards recalled seeing her colleague, Officer Brian Sicknick, after someone apparently sprayed him with bear spray.

“I turned and it was Officer Sicknick with his head in his hands. And he was ghostly pale,” Edwards told the committee, adding:

I figured at that point that he had been sprayed. I was concerned. My cop alarm bells went off. If you get sprayed with pepper spray, you’re going to turn red. He turned about as pale as this sheet of paper. I looked back to see what had hit him, and that’s when I got sprayed in the eyes as well. I was taken to be decontaminated by another officer, but we didn’t get the chance because we got tear-gassed.

Initial reports said Sicknick, who died the next day, had been struck on the head with a fire extinguisher. But it turned out that wasn’t true and that Sicknick actually died of natural causes, although the stress of the day’s events could have prompted a stroke.

In a rare moment of humor during the hearing, Edwards earlier recalled radioing her supervisor: “Sarge, I think we’re going to need a few more people down here.”

During the televised hearing, Republican members of the House Judiciary Committee made a case that Americans care more about issues, writing on Twitter: “RT if you’d rather Democrats focus on tackling $5 per gallon gas than [Rep. Adam] Schiff’s Sham January 6th Charade!”

Schiff, D-Calif., a member of the select committee, played a major role in Democrats’ two impeachment drives against Trump.

“When’s the primetime hearing on threats against Supreme Court Justices and their families?” Jordan tweeted.

“Bennie Thompson voted to object to the 2004 election,” Banks tweeted. “He’s not an insurrectionist, he’s just a hypocrite.”

The committee’s next two hearings are scheduled for Monday and Wednesday at 10 a.m. ET.

Did Ben & Jerry Ice cream company step out of line...