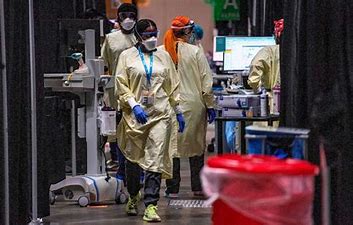 I say “wow” because you don’t get to 70 percent on anything in America without solid support within both parties. It’s a given that Republicans think it’s high time to get back to normal but who knew that so many Democrats agreed?

We should have known. There have been signs lately.

There have also been signs that the liberals setting COVID restrictions don’t take them particularly seriously:

The video contradicts Newsom’s assertion today that he only removed his mask “for a brief second” when he “took a photo.” pic.twitter.com/kTOjBOlT0F

Masks were required inside SoFi Stadium for those attending yesterday’s 49ers/Rams game. The governor couldn’t be bothered, so go figure that a growing share of the population feels the same way.

Monmouth decided to take the country’s temperature on COVID restrictions at what feels like an inflection point during the pandemic, with every man, woman, and child in the U.S. exhausted from having to navigate the virus. As noted above, parts of the liberal commentariat have begun steering towards normalcy post-Omicron, particularly for kids, which means the divide on matters like mask mandates increasingly is less a matter of blue versus red than of blue versus blue. Monmouth asked the gut-check question: Is it time to live life again or should we remain in a defensive crouch against COVID? Results:

A near equal split on Team Blue, with independents lopsidedly on the side of Republicans. If Democrats weren’t already panicked about the midterms, that result would do it.

Ross Douthat wondered this weekend whether the mask debate will end up splitting blue states:

We have a regime of Covid surveillance, but it’s not a general one imposed by a narrow group of technocrats on the great mass of Americans. Rather it’s a regime imposed by the elites upon themselves (and, of course, their service workers), in which the highly educated and highly vaccinated are more likely to carry identity papers and rigorously self-police while less-vaccinated populations in the outer reaches of New York City or the New England suburbs (let alone in Arkansas or Alabama) are often left to their own more casual devices. And to pass back and forth between these two worlds, just a subway ride or short highway drive away from each other, is to appreciate not the ever-expanding influence of Faucian technocracy but, for now at least, the palpable limits of its power…

These conflicts … threaten an extension of the dynamics that have already created political problems for Democrats in states like Virginia and New Jersey: the alienation of inner-circle liberalism, with its advanced degrees and N95s, from swing constituencies whose attitude toward the pandemic may be more like “vaccinated and done.”

The same Monmouth polls now finds Americans opposed to workplace vaccine mandates, dropping from 53/45 support in September to 43/53 support today. Which makes sense: Pre-Omicron, when vaccination was more of a brake on transmission, it was easier to argue that all employees should have their shots in order to limit how much virus ended up on the job. Post-Omicron, that argument is harder.

Here’s a surprising result, though. If 70 percent of Americans believe COVID is here to stay and it’s time to get on with our lives, how do we explain this?

A majority still supports mask and social distancing “guidelines,” including a narrow majority of independents. The overall number is down from September, when it stood at 63 percent during the Delta wave, but it’s hard to square this data with the other data up above. Did people responding to the poll understand the word “guidelines” to mean something different from restrictions or mandates, maybe?

Maybe when some Americans say it’s time to get on with our lives, they don’t mean full pre-pandemic normalcy. They mean something more akin to “normalcy, but with safeguards.” Go to the 49ers/Rams game, by all means — but wear the mask while you’re there. Which sounds like Anthony Fauci’s position!

Fauci says the U.S. won’t get back to a pre-COVID normal.

“We’ll start to see a gradual return to normal even though normal will NOT be exactly the way it was before all of this.” pic.twitter.com/MxzOHYd24J

This op-ed today from a trio of experts reminds us that there’s truly no way to know if the pandemic is almost over, only halfway done, or barely begun. “Remember, we have coexisted with the flu for thousands of years; we are just two years into our relationship with covid-19,” the authors warn, ominously. Monmouth finds that 60 percent believe we won’t get COVID under control until next year — or that we never will. The best weapon we have to make it happen is for everyone to get boosted but Monmouth has some bad news about that too:

Less than half of independents and less than a third of Republicans have been boosted. Why does that matter? New data published today in the Financial Times helps explain. One key reason that Europe’s Omicron wave has been less deadly than ours is that their booster rates are meaningfully higher, limiting the amount of severe illness overseas. No wonder just 29 percent in Monmouth’s poll said the American public has done a good job dealing with the pandemic:

More than half of Republicans say they’ll never get a booster, assuming Monmouth’s data is correct. There’s a lesson in that about how little influence Trump has over his base when his own position directly conflicts with populist orthodoxy.

I’ll leave you with this Confucian thought from Fauci, which he shared in an interview today. Given the polling on boosters, I can only assume that the cautious will feel compelled to continue their caution indefinitely.