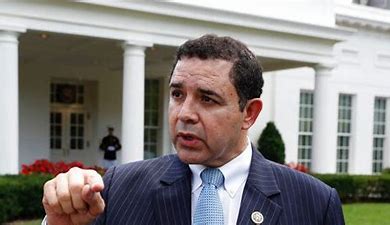 Democrat Rep. Henry Cuellar represents the Rio Grande Valley (RGV) in Congress. In January his campaign office and his home in Laredo were raided by the FBI. Investigators were tight-lipped, as was Cuellar and his campaign, as the investigation was ongoing. It was reported that a federal probe into the former Soviet state of Azerbaijan and several U.S. businessmen were involved. At the time it was not clear if Cuellar was a target of the grand jury’s investigation. Cuellar’s attorney now says that he has been told that Cuellar is not a target.

That’s good news for Cuellar and his campaign for re-election. He’s been in Congress since 2005 and is co-chair of the Congressional Azerbaijan Caucus. He has met with Azerbaijan officials, including the ambassador of Azerbaijan, Elin Suleymanov. This whole story was a shock at the time because Cuellar does not have a history of allegations about corruption. He is one of the few remaining moderate Democrats left in the House. He’s pro-life and he’s a border hawk. Cuellar is an endangered species in the Democrat Party and a constant thorn in the side of Joe Biden and DHS Secretary Mayorkas. The FBI raid, frankly, looked like Democrat dirty tricks coming for his primary challenger, a progressive endorsed by Justice Democrats and the AOC wing of the party. She ran against Cuellar in 2020. It’s a tight race and she has capitalized on the headlines against Cuellar.

The race is a rematch from 2020 between one of the most conservative Democrats in Congress who touts a long list of local endorsements and a progressive who has the endorsement of Bernie Sanders, Elizabeth Warren, and Alexandria Ocasio-Cortez.

“A runoff is going to just be one step closer to toppling Cuellar as the incumbent and continue to center our campaign around the needs of our community,” Cisneros told TPR. “And we’ve gotten this far because I’ve stayed true to myself and my values and the values in South Texas. And even if it’s going to take a little bit longer, if we continue working the way that we’ve been working and reaching voters where they are, we’re going to have a victory.”

Let’s hope that Cuellar wins his run-off race against his opponent. If his district has to be represented by a Democrat, I’d rather it be Cuellar than a far-left progressive who has the opposite opinions on illegal migration and open borders brought on by Biden’s border crisis. The best outcome would be for a Republican to be in that office but that’s not very realistic to hope for. Meanwhile, there has been very little reporting that Cuellar has been told he’s not a target. Imagine that.

Cuellar has been very vocal since Biden took office about the chaos at the southern border. I’m sure Biden would like for Cuellar to be replaced by a 29 year old progressive AOC wannabe. Recently Cuellar said he has all but given up on Biden, Kamala, and others in the administration who ignore his calls and refuse to take him up on his offer to show them the border. They pay him lip service, he says, yet we know that Biden has no intention of fixing the border.

With all the chaos over the coming end of Title 42 on the border, Cuellar is sounding the alarm that Republicans are being given a gift from Biden and the CDC. It isn’t only Republicans who are angry about the Biden border crisis, it is also Independent voters. That isn’t good for Democrat incumbents looking to hold on to their seats as a wave election approaches. Biden’s disastrous polling numbers have created some election converts in the Democrat Party and now they are sounding like Cuellar, too.

“This is not good for Democrats in November. You know, in talking with some of my Republican colleagues, they’re saying ‘We can’t believe the White House is giving us this narrative. We can’t believe that they’re hurting Democrat candidates for the November election,’” the congressman told Fox News Digital on Thursday.

Cuellar was interviewed on Fox News Sunday this morning and made a point that I don’t think most people realize – only about 40% of Border Patrol agents are actively guarding the southern border. About 60% of them are tied up with processing the overwhelming flood of migrants at the border. In other words, there are more Border Patrol agents doing paperwork than patrolling the border.

Tomorrow Biden will meet with members of the House Hispanic Caucus. Cuellar said that only he and Rep. Vincente Gonzalez are on record against Title 42 being lifted in May. Gonzalez represents Texas’s 15th congressional district. His district stretches from San Antonio’s outer suburbs to the Rio Grande Valley. These two Democrats should be listened to by Biden and Mayorkas, as they represent areas that are at the epicenter of the Biden border crisis but this president isn’t serious about protecting the sovereignty of the United States or national security.

Endangered Democrat incumbents are desperate and running away from Joe Biden in order to save their jobs. It’s likely too little, too late, as the malaise experienced by most Americans is real and there is no way this inept and incompetent administration can turn things around for voters before the November midterm elections. Biden does not have the spine to stand up to the House Hispanic Caucus or to other progressives because he ran on eliminating the very policies and agreements that worked for the previous administration on the southern border. He pandered to open border progressives in order to get their votes. We see the results now. The humanitarian crisis at the border is unprecedented.