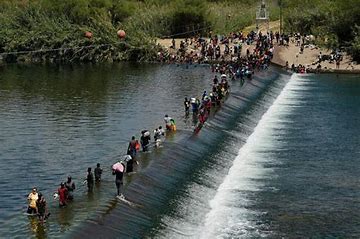 Joe Biden is finally visiting the southern border–a small slice of it, anyway, in El Paso. The town has been frantically cleaned up, Potemkin-style, for the president’s appearance. But Texas Governor Greg Abbott isn’t fooled. Today he hand-delivered to Biden the letter that is embedded below.

Abbott’s letter calls on Biden to do his job. It chastises him for violating his constitutional duty to enforce the laws:

All of this is happening because you have violated your constitutional obligation to defend the States against invasion through faithful execution of federal laws.

Abbott contrasts Biden’s abysmal record with that of President Trump:

Governor Abbott wants Slow Joe to do his job. Specifically:

* You must comply with the many statutes mandating that various categories of aliens “shall” be detained, and end the practice of unlawfully paroling aliens en masse.

* You must stop sandbagging the implementation of the Remain-In-Mexico policy Title 42 expulsions, and fully enforce those measures as the federal courts have ordered you to do.

* You must aggressively prosecute illegal entry between ports of entry, and allow ICE to remove illegal immigrants in accordance with existing federal laws.

* You must immediately resume construction of the border wall in the State of Texas, using the billions of dollars Congress has appropriated for that purpose.

* You must designate the Mexican drug cartels as foreign terrorist organizations.

Joe Biden is a scofflaw. Unfortunately, the entire Democratic Party supports him in his disregard for the law and for his constitutional obligations.

Matt Gaetz Might Have Gotten Himself Sent To Prison With Bonkers...