Roce Today – Politics, Opinions, Gun Rights,Pro-Life and Border Wall
Home Politics About one half of donations for Canadian truckers are from American donors 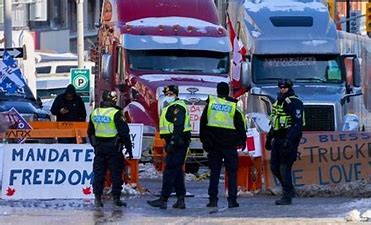 The CEO of crowdfunding site GiveSendGo told Fox Business that about half of the donations it receives for the Canadian truckers protesting COVID-19 vaccine mandates come from Americans. Americans and Canadian donors are about evenly split. Donations from Americans are mostly small ones – $100 or less.

GiveSendGo became the primary crowdsourcing online site for the Canadian Freedom Convoy after GoFundMe shut down its page for donations. The donor list was hacked over the weekend and the names of donors were published online. The hacker meant for those who oppose the actions of the truckers to know who to harass about their financial support. The list contained 93,000 donors. The hacker also produced a manifesto condemning GiveSendGo, a Christian crowdfunding site along with the truckers. Fortunately, no credit card information was leaked.

GiveSendGo co-founder and CFO Jacob Wells could not confirm the validity of all the names on the list but did say that before the hack, he could confirm that the American donations were mostly on the smaller side, $100 or less.

Yesterday it was reported by a Canadian journalist that a CBC state broadcaster was going through the names of donors on the hacked list and emailing them, asking why they made donations.

Trudeau’s state broadcaster is doxxing Trudeau’s political opponents. They’re teeing them up for financial punishments. This is not journalism, anymore than Der Sturmer or Pravda was journalism.

That doesn’t sound nefarious at all, right?

The harasser in this story admits to what he is doing and that he will publish the names of those who confirm to making a donation. Intimidation, much? Is he surprised that his response rate is low?

It appears that some don’t agree with this. For the record, we are not publishing any of the names until we have spoken to the person and they have confirmed they donated.

This is just another example of why the press is so disliked by ordinary people. This guy could have spoken with any number of truckers protesting the COVID-19 mandates any time he wanted to do so but instead he latches on to a donor list provided by a hacker and starts making contact with the supporters of the truckers. He could have spoken to supporters who line the streets in Canada to support the convoy. Instead he looks like he’s a part of some sort of state-sponsored secret police operation.

Some Canadian truckers are a bit perplexed about all the support received from Americans. Perplexed but appreciative.

Derek Brouwer, a Canadian trucker and part of the convoy, told FOX Business that while he can’t speak to the numbers, he has received an outpouring of support from Americans he does business with from Florida, New Mexico, and Georgia. He said a handful of them call him regularly, saying, “We’re really vouching for you, we’re praying for you guys,” and that it’s encouraging.

“We don’t know what our expense is going to be on this,” Brouwer said, talking about the impact on drivers who are part of the Freedom Convoy. “But I’ve already had someone basically say, ‘if they take your truck, I’ll buy you a new one.’”

Brouwer says he’s never lived in the U.S., so he doesn’t “know why, exactly,” Americans are being so supportive of the Freedom Convoy’s cause, but thinks it has to do with “the restriction thing,” adding that “it really bothers them down there.”

“They don’t have nearly the restrictions we have, but that’s because I think they’re a little more independent than we are as [individuals],” he told FOX Business, saying he believes the protest has brought Americans and Canadians closer together.

Yep, Derek, it’s “the restriction thing.” Americans cherish personal freedom. We are guaranteed the right to freedom of speech and that includes peaceful protest. We thought our neighbors to the north were free people, too. Who would have thought that Canadians would spark a desire for people around the world to speak up about government mandates?

GiveSendGo has gone into battle mode. The site is back online and donations have not been frozen. At least $9.3M has been raised for the truckers. It is working with several campaign organizers to find the most effective legal ways to continue the flow of funding. Last week a Canadian court banned GiveSendGo from funding the Freedom Convoy. The company said it will not follow the ruling.

“Know this!” GiveSendGo tweeted. “Canada has absolutely ZERO jurisdiction over how we manage our funds here at GiveSendGo. All funds for EVERY campaign on GiveSendGo flow directly to the recipients of those campaigns, not least of which is The Freedom Convoy campaign.”

Sounds like the truckers will get their money, one way or another, in no small part thanks to the generosity of freedom-loving Americans.

UPDATE: After I finished this post, I came across the news that Marion Isabeau Ringuette, who was Ontario Solicitor General Sylvia Jones’s director of communications, was fired for donating to the truckers.

After the donor list to a GiveSendGo campaign supporting the protests was stolen and leaked by hackers this week, Isabeau-Ringuette’s identity was apparently deciphered and reported to her employer, although she only used her initials when making the donation.

The local news outlet QP Briefing said that it had ‘brought the information to the attention of Isabeau-Ringuette and Premier Doug Ford’s office late Tuesday afternoon’ as Canadian journalists scour the hacked list for donor names and out them to employers.

‘We’re not commenting any further as this is a staffing matter.’ .

And so it begins.

What the hell going on in Israel?