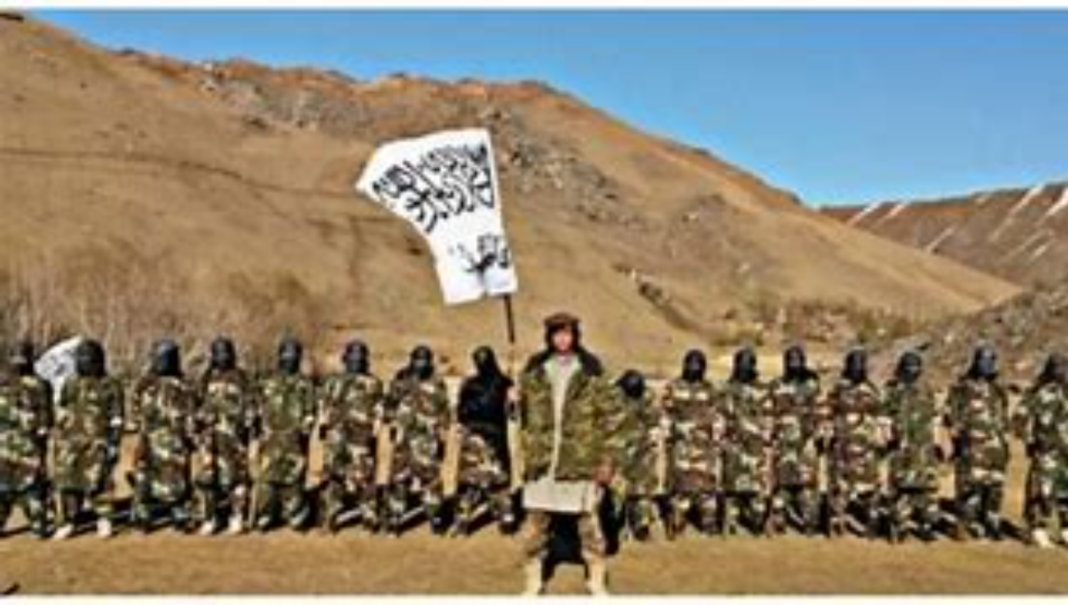 As of Friday, the Taliban have captured more than a dozen of Afghanistan’s 34 provincial capitals, and are estimated to hold two-thirds of the country.

According to a memo obtained by NPR, the Biden administration is carrying out emergency preparations to send nearly 3,000 U.S. troops to provide security and help evacuate its embassy in Kabul, signaling fear that Afghanistan’s capital may fall sooner than expected and escalating concerns about human rights and safety across the country.

Rangina Hamidi, Afghanistan’s acting education minister, is still in Kabul — for now. Hamidi is originally from Kandahar, the country’s recently fallen second-largest city, and her father, Ghulam Haider Hamidi, was assassinated by the Taliban in 2011, when he was mayor of that city. She says that it’s been “quiet so far” where she is in Kabul, but she’s receiving many messages from friends and family in her hometown who tell her that armed Taliban members are “walking all across the city, and nobody knows what they’re planning to do or what is going to happen next.

“There is a lot of fear among girls and women,” she says. “I have had many messages from my female family, friends calling me, asking me what I know and what they should expect. And I wish I had an answer for them.”

Women were denied education and employment opportunities when the Taliban last held power in 2001. At the time, Afghanistan’s student population was around 900,000, all of whom were male. But gender equity in education was one of the top areas of progress in the country over the last 20 years: Girls accounted for 39% of Afghanistan’s estimated 9.5 million students last year.

Many fear all of that progress could be lost if the militant group takes control again.

Hamidi spoke to All Things Considered‘s Ailsa Chang about the difficulty of educating children in an environment of destruction and her hopes for Afghanistan’s future.

This interview has been edited for length and clarity.

Ailsa Chang: Do you have a sense at this point how these gains that the Taliban are making across the country, how that has affected the education system in Afghanistan?

Rangina Hamidi: The reality is, in general, that the psyche of the Afghan population, be it adults or children, has changed drastically. I can assure you that when you’re living in the war zone, no matter what system of education you try to bring to that environment and no matter how much focus you put on quality to make a great curriculum and provide the great service, if children are haunted by images of destruction and the sounds of destruction on a daily basis, I don’t know which society on this earth can really operate in any normalcy, if we can call it that. It’s honestly very, very difficult.

And I’ll tell you personally, I have a young daughter who is in fifth grade. And in my house, we have other kids living with us and today they were playing outside in the garden. As I was looking at them, they’re oblivious to what is happening in Afghanistan, but me, as a mother sitting in my home feeling the unease, it struck me to think and look at them and say, “God forbid, but something can happen any minute.” And these joyous little girls playing in the garden, [their lives] may end in a second. That’s what millions and millions of Afghans, unfortunately, face every day.

And may I ask, what are you personally telling other government officials right now? What is your view of what should be happening?

Do you believe this pullout after 20 years is a mistake?

I don’t think the answer to Afghanistan’s problem is the continued presence of any international troops, be it American or others. My assessment of the past 20 years is that the international community made some really major mistakes in the decisions that they made in terms of who they aligned themselves with in Afghanistan. And I remember very vividly and very loudly in my youth days, I was speaking loud and clear and screaming to the international forces, as they align themselves with warlords and drug lords, that the results of this relationship are not going to be pretty. And unfortunately, that fear has proven to be true. And 20 years on, with thousands of lives lost, both on the international end as well as the Afghan national end, and billions of dollars wasted, we’ve come back to point zero where we began in 2001.

“If children are haunted by images of destruction…on a daily basis, I don’t know which society on this earth can really operate in any normalcy,” Rangina Hamidi, Afghanistan’s acting education minister, tells NPR.

You were educated in the U.S., you returned to Afghanistan in 2003. And I’m wondering, at that time, what was your hope for the future of your country?

My hope was what America offered me, a young child growing up. My family and I immigrated to the U.S. in 1988 when I was about 11 years old, and I went through school, high school, college — had the freedom of choice. I made the decision myself to not be a medical student and instead focus my studies on humanities because I had a deep interest in women’s issues and international issues that affected women.

And I thought that by coming [back] to Afghanistan, having brought that experience and having brought whatever knowledge that I had gained in my life as a refugee child outside of Afghanistan, I thought I could give back. That was really the hope that contained me here. I initially planned on being in Afghanistan for only one year, but after being here for one year, we Afghans or anybody who really likes and loves Afghanistan, we always use this notion that this country has some sort of a magnetic force that once you come here, you’re pulled by its natural forces. And so 18 year onwards, I’m still here, obviously in a very different position. And I believe I’ve done a lot, not only me, but everybody who did their best to make the best out of our opportunity — our limited opportunity and limited resources that we’ve had recently — but we were hoping to still have a peaceful and a slowly progressive, prosperous life. And unfortunately, all of those dreams and hopes seem to be ending. As the situation unfolds itself, holding on to that hope is becoming grimmer and grimmer, day by day.

I hope you and your family do remain safe.

I hope so, too, and I hope and look forward to potentially having another conversation. And if this is my last one, may the world know that the Afghan people have suffered tremendously. And I hope that the international community, and all the great powers that exist, can see the reality of how our neighbors are ruining our past, present and future as we speak.