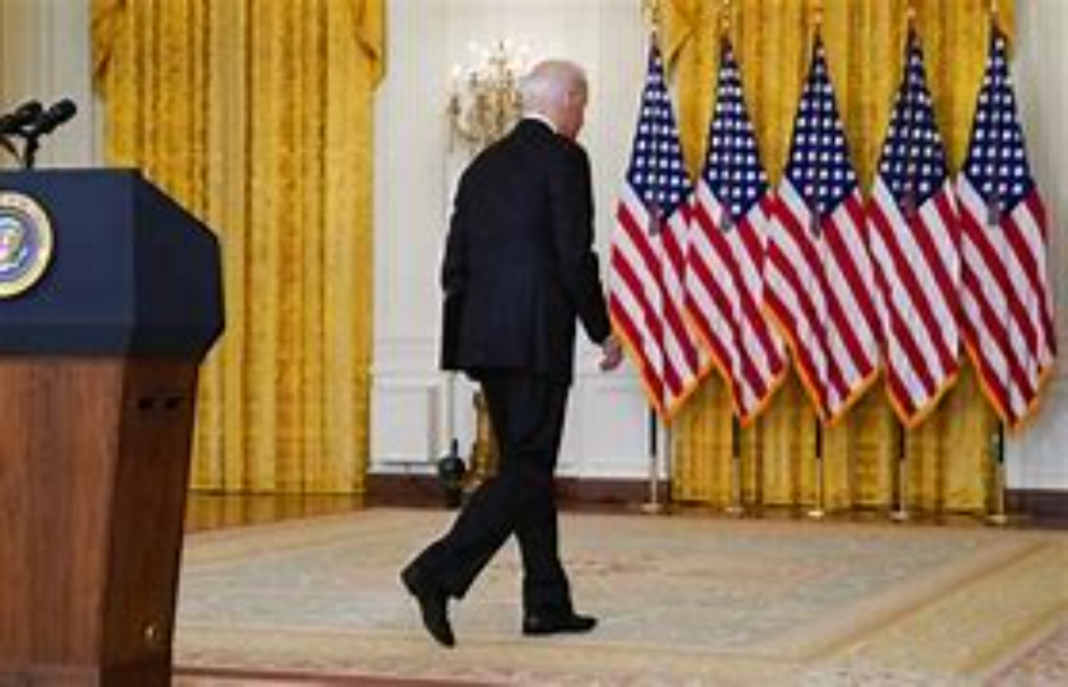 Joe Biden’s speech today was a disgrace. He read briefly from a teleprompter, and took neither questions nor responsibility. It is reasonable to infer that his mental condition is such that he is not able to answer questions, or else his actions have been so indefensible that there is no answer to the questions that might be asked.

It is a remarkable fact that in the last week, the Taliban has answered more questions from American media than President Biden.

Biden pretended that he is being criticized for withdrawing from Afghanistan. This is a bad joke. I, for one, wrote years ago that we should wind up our involvement in that country. I did not suggest, however, that we should pull out precipitously, without evacuating civilians first, and suddenly deprive Afghan forces of air cover so that it would be difficult or impossible for them to fight effectively. Nor did I write that we should abandon our bases without even bothering to secure or at least destroy materiel that has now fallen into the hands of the Taliban. I did not advocate that we pull out our military personnel first and only worry about civilians later, nor did I suggest that we wait until the Taliban have encircled the Kabul airport before trying to get either Americans or friendly Afghans onto airplanes.

The disaster in Kabul is so complete that even Kato Kaelin–remember him?–understands the fatuity of Biden’s excuses:

Like me, Donald Trump wanted to get out of Afghanistan, but he didn’t advocate doing so in the disastrous manner that we have just witnessed. Trump said this today:

Can anyone even imagine taking out our Military before evacuating civilians and others who have been good to our Country and who should be allowed to seek refuge? In addition, these people left topflight and highly sophisticated equipment. Who can believe such incompetence? Under my Administration, all civilians and equipment would have been removed.

We have all seen videos and photos documenting the fiasco in Kabul, but this is one I hadn’t seen until this afternoon:

JUST IN: “The Crew made the decision to go” — Inside RCH 871, which saved 640 from the Taliban … from @TaraCopp and me https://t.co/r4YvGqJZ4b pic.twitter.com/CI1mAmqjHT

Kudos to the C-17 crew for saving those Afghans, notwithstanding the seeming paucity of women and children. But this apparently is Biden’s idea of an orderly withdrawal.

Will Biden get away with the deflection he attempted this afternoon? I don’t think so. The first poll data are out, from the reputable Trafalgar Group, whose methodology you can read about here. The survey was conducted over the weekend and covered 1,084 likely voters. The question was, “What best describes how you feel about how President Biden is handling US military operations in Afghanistan?” Not, of course, what do you think about withdrawal as a concept.

These numbers are remarkably bad for the first days of the crisis, and will only get worse as people learn more about the disaster. Biden tried to give a “Mission Accomplished” speech today, but I think he failed.

Not every Republican is as bone-headed as Greg Abbott, as vaccinations...

NYC jail where Epstein killed himself is Closed

Trump Is Holed Up In The Mar-a-Lago Bridal Suite Designing His...