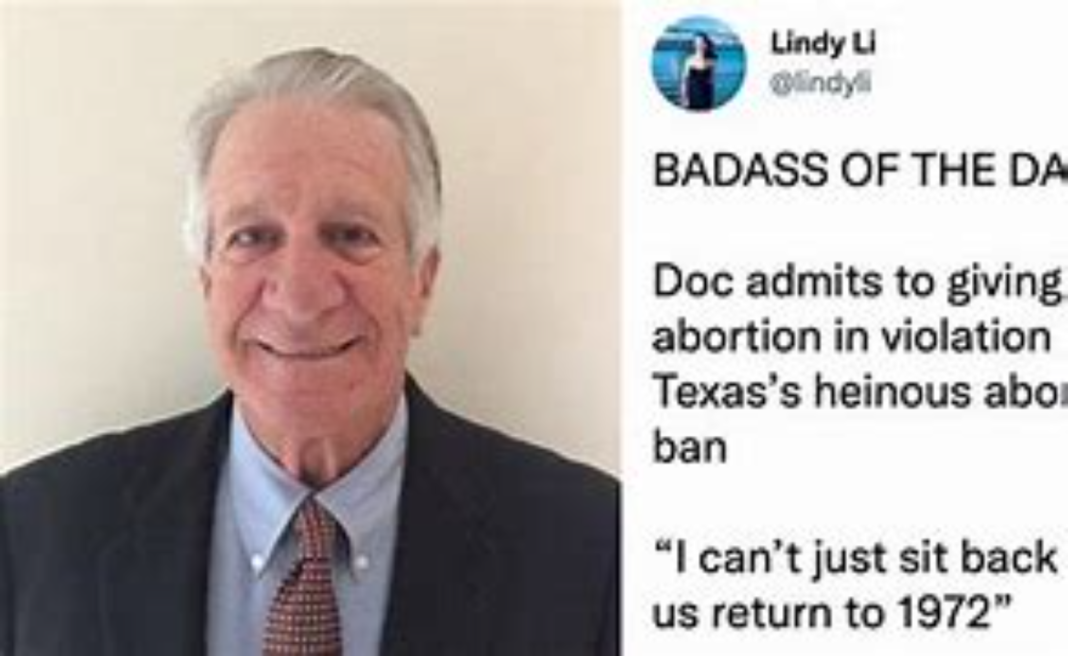 Be careful what you wish for. That may be good advice for both sides of Texas’ novel, citizen-enforced ban on abortions after a fetal heartbeat is detected. In this case, Texas doctor Alan Braid openly confessed in a Washington Post op-ed column to violating the law, and dared someone to sue him over it:

For the next 45 years — not including the two years I was away in the Air Force — I was a practicing OB/GYN in Texas, conducting Pap smears, pelvic exams and pregnancy check-ups; delivering more than 10,000 babies; and providing abortion care at clinics I opened in Houston and San Antonio, and another in Oklahoma.

Then, this month, everything changed. A new Texas law, known as S.B. 8, virtually banned any abortion beyond about the sixth week of pregnancy. It shut down about 80 percent of the abortion services we provide. Anyone who suspects I have violated the new law can sue me for at least $10,000. They could also sue anybody who helps a person obtain an abortion past the new limit, including, apparently, the driver who brings a patient to my clinic.

And that is why, on the morning of Sept. 6, I provided an abortion to a woman who, though still in her first trimester, was beyond the state’s new limit. I acted because I had a duty of care to this patient, as I do for all patients, and because she has a fundamental right to receive this care.

I fully understood that there could be legal consequences — but I wanted to make sure that Texas didn’t get away with its bid to prevent this blatantly unconstitutional law from being tested.

That is, of course, the point of this essay. Lawsuits against the new statute have failed to win injunctions because there’s nothing and no one to enjoin, as the Supreme Court made clear at the beginning of the month. That’s the same defect that the Department of Justice’s lawsuit will have, too — it’s too speculative and the plaintiffs can’t demonstrate actual harm happening to them. It will take a lawsuit against a provider to provide the ripeness needed for federal courts to intervene.

It’s worth noting that Braid didn’t need to provoke that. Travis County Judge Maya Guerra Gamble has already issued an injunction within her court’s jurisdiction over SB8, the abortion law at issue here. That injunction doesn’t extend beyond Travis County (Austin and environs) at the moment, but any appeals moving up the state-appellate chain could provide abortionists the opportunity to extend the injunction across Texas as a whole. Or the plaintiffs could ask the federal court to transfer the case and then apply for the injunction.

Of course, that wouldn’t give Braid the opportunity to act bravely in, er, keeping on keepin’ on in aborting babies. But will anyone take up his dare? Pro-life organization Texas Right to Life is stepping cautiously so far, suggesting that it’s a stunt:

Even before his disclosure, Dr. Braid, who has operated abortion clinics in Houston and San Antonio as well as in Oklahoma, was already challenging the law in court. His clinics are among the plaintiffs in a pending federal lawsuit seeking to overturn the measure. …

Texas Right to Life, an anti-abortion group that had been seeking tips on any doctors who might be violating the new law, said in a statement that it was “looking into this claim but we are dubious that this is just a legal stunt.”

“The abortion industry has struck out on their 16 previous attempts to stop this law from saving lives so far and this may be another attempt,” the group said. “However, there is a four-year statute of limitations for any violations and the Pro-Life movement is dedicated to ensuring that the Texas Heartbeat Act is fully enforced.”

Is it a stunt? Sure. Is it an effective stunt? Probably. Braid failed in his attempt to get the Supreme Court to act on a speculative harm. Now he wants pro-life organizations to provide a real harm. It’s a call on a bluff that could settle the whole issue in a fairly quick period of time If they don’t sue him, then the law is useless — but if they do sue him, federal courts will have to recognize that the issue is ripe and determine whether Braid et al is likely to prevail at trial … under existing precedents such as Casey and Danforth. Both cases resulted in the Supreme Court ruling that any law that imposes a too-significant burden on access to abortion is unconstitutional. That was the precedent cited by Justice Stephen Breyer in his dissent earlier this month, and it’s going to be an even bigger problem when a ripe case comes back before the court.

That might not be enough to stop it altogether. The Supreme Court just announced its schedule for the head-on challenge to Roe coming from Mississippi, a case that will likely determine whether the Texas law is a stunt itself:

The Supreme Court will hear a case concerning a Mississippi abortion law on December 1, the court announced on Monday, teeing up one of the most substantial cases of the term in which the justices are being asked to overturn Roe v. Wade.

Mississippi’s Gestational Age Act, passed in 2018 but blocked by two federal courts, allows abortion after 15 weeks “only in medical emergencies or for severe fetal abnormality” and has no exception for rape or incest. If doctors perform abortions outside the parameters of the law they will have their medical licenses suspended or revoked and may be subject to additional penalties and fines. …

In a brief filed in July, Mississippi Attorney General Lynn Fitch, a Republican, argued that Roe v. Wade was “egregiously wrong” and should be overturned.

“The conclusion that abortion is a constitutional right has no basis in text, structure, history, or tradition” Fitch told the justices.

This is the real fight in the abortion issue. If the court overturns Roe, then the issue will return to the legislatures and the other controlling post-Roe precedents will fall to the wayside. If that happens, Texas can simply repeal SB8 and restrict abortions under criminal law. If the court upholds Roe, then Texas will still have a tough time winning on its breathtaking view of standing in this new law anyway, not to mention the burden it obviously intends to place on abortion access. In between, don’t bet against a Supreme Court injunction on SB8 once a truly ripe case with sufficient standing reaches them — regardless of how one feels about abortion.