Home Pro-Life Alyssa Milano:The most Dangerous time to be a woman in America 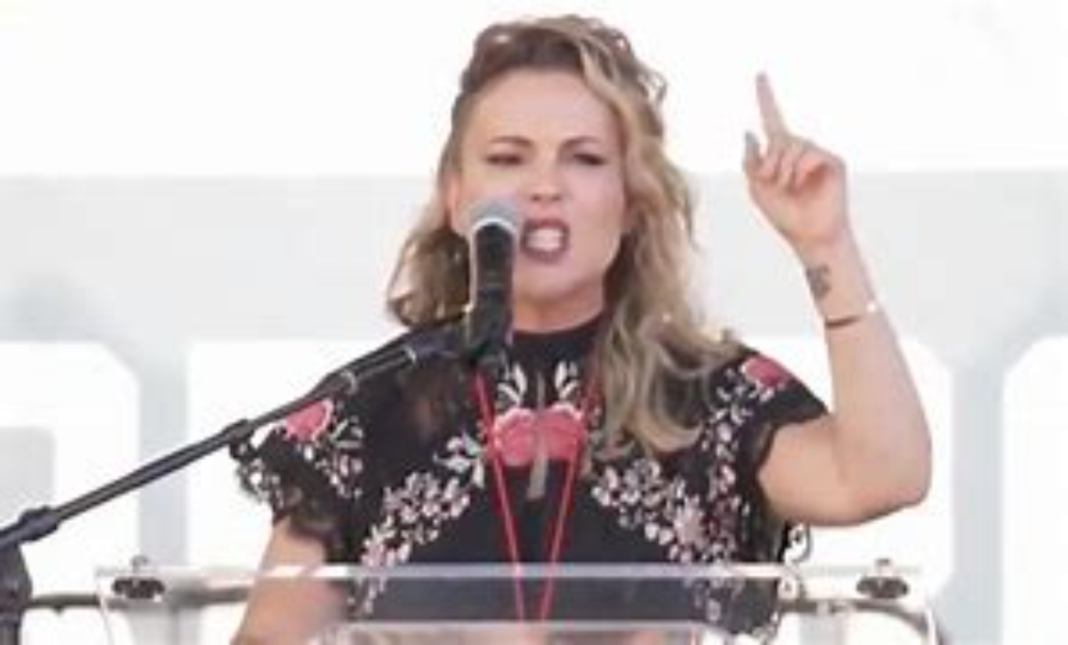 The first Women’s March during the Biden administration happened Saturday. Activists and celebrities made headlines for their participation in marches and rallies across the country in support of reproductive rights, code for support of abortion on demand. The passage of a fetal heartbeat law in Texas (SB 8) has brought about a new round of demonstrations in support of abortion and Governor Abbott is the bad white Republican man on the hot seat.

In Los Angeles, full-time activist and part-time actress Alyssa Milano did as she is known to do – she delivered a speech loaded with hyperbole. She spoke about life in America right now and described it as the most dangerous time to be a woman. That’s an interesting take since pro-life people would argue that abortion on demand is very dangerous to unborn babies. I’m surprised Alyssa didn’t show up in a long red cape and white cap, dressed as a character in the Handmaid’s Tale. Here I thought that the most dangerous time in America for women (and men, too) was during Trump’s presidency.

She singled out the men who attended the march by telling them they must use their privilege to destroy their privilege or something. No one has ever mistaken Alyssa for a deep thinker.

“I cannot believe how f—ed up America is right now,” Milano said Saturday in her speech, which she also posted to her Twitter account.

“I can’t believe how a handful of men are successfully taking 50 years of rights away from women and how our Supreme Court, packed with abusers, is just gonna sit by and let it all happen,” she continued.

Milano went on to single out the men who attended the rally, asking them to not “mistake marching — showing up for a single event — with being an effective ally in this fight” and saying, “You need to take action and keep taking action until this is all fixed.”

“Use your privilege to destroy your own privilege,” she told the men.

“It is time for the president and the leaders in Congress to enact the Equal Rights Amendment. They need to do it f—ing now,” she said.

“This is the most dangerous time to be a woman in America,” she added.

Did you catch her opinion that the Supreme Court is “packed with abusers”? There’s a hot take for you. No one is more woke than a Hollywood elitist.

Pro-abortion women and men are outraged about the Texas fetal heartbeat law that eliminates abortion after the fetal heartbeat is detected, usually at six weeks into the pregnancy. It’s true that many women don’t realize they are pregnant at that early stage of pregnancy but the real outrage is aimed at the fact that Texas legislators found a way to avoid traditional legal challenges to the bill. Normally, fetal heartbeat laws are struck down by judges who rule in favor of women seeking abortions and against the state government that is restricting abortion. The Texas bill is written so that any Texan can report an abortion provider or a woman for abortion after the cut-off time. The law includes allowing tipsters that report lawbreakers to receive financial rewards for their involvement. Those who help a woman, like a driver or a person who pays for the abortion, can also be held accountable. It is a very strict law and likely won’t hold up in the Supreme Court. In the meantime, it is the target of controversy.

I wrote about Top Chef celebrity hosts filming the current season of the television show in Houston who planned to join in on the Women’s March. Mayor Sylvester Turner, U.S. Reps. Al Green, Lizzie Fletcher, and Sylvia Garcia joined in. George Floyd Foundation executive director Shareeduh Tate, and DeAndre Hopkins’ mother, activist Sabrina Greenlee participated. It is reported that a crowd of more than 10,000 protesters showed up. Since this is a political hot button issue, the mayor turned it into a voter registration drive. Turner proclaimed Oct. 1 as Women’s Voter Registration Day. At the time I wrote that post, I wondered if Top Chef judge Tom Colicchio would participate, as he wasn’t mentioned with Padma and Gail Simmons. Turns out he was there but not on stage with the others.

The roster of speakers Saturday included celebrity chefs Padma Lakshmi and Gail Simmons, who are in Houston filming the upcoming season of “Top Chef.” They were accompanied by fellow “Top Chef” judge Tom Colicchio, who stood offstage showing support.

“To be on the ground (in Houston), meeting people every day who live here, work here, and struggle and prosper here has been really informative and nurturing,” Lakshmi told the Houston Chronicle. “I’m happy that I get the privilege of doing the work that I already do with Planned Parenthood and the American Civil Liberties Union here in Texas.”

Simmons said marching in Houston allowed her to bring more attention to the causes at hand.

“There are women’s issues and voter, gun law and immigration issues that affect women as well as children and families,” Simmons said. “If I can lend my voice to these in some small way and make my time here as productive as possible, how could I say no?”

Pro-abortion supporters are angry that the Supreme Court didn’t step in and stop the fetal heartbeat law from going into effect on September 1. The new Supreme Court session begins on Monday. It is expected that the court will review whether all state laws that ban pre-viability abortions are unconstitutional. This is important as other states are considering following the Texas law with laws of their own, including Florida, North Dakota, Mississippi, Arkansas, South Dakota, and Indiana. In Texas alone last year, 54,000 abortions were performed. About 7 million women of reproductive age live in Texas.

The opponents of the Texas law are not all Democrats, it should be noted. Senator Susan Collins calls the law “inhumane” and wants to vote to codify Roe v Wade. Maryland Governor Hogan also doesn’t support the law.