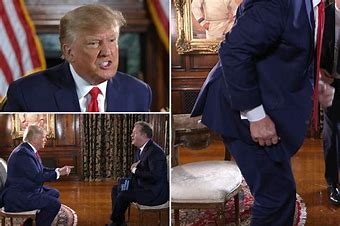 A sneak preview from a new one-on-one involving one of the most obnoxious people in the world.

I’m tempted to ask, “How often does Trump do an interview where he’s not the least likable person in the room?” But then I reflected on what sort of people typically interview him and thought, “Pretty often, actually.”

Credit to Piers where it’s due: This one looks juicy. And I mean that literally. By the end, both of them are positively moist with sweat.

Trump walks out on Piers Morgan during contentious interview pic.twitter.com/NKUTBblGDS

The first time ever that an interviewer gets in Trump’s face about the “rigged election” nonsense and it’s going to air on … Fox News’s streaming platform?

That’s like airing “Cops” on MSNBC. Know your audience, fellas.

If you can’t wait to find out how the longer interview went, Morgan drops a few clues in this account of their chat. He’s launching a new program and quite reasonably hoped to make a splash in the first episode by leveraging the most newsworthy phone number in his Rolodex. He and Trump go way back, with Morgan having once won “Celebrity Apprentice,” so he naturally thought confronting the ex- and maybe future president about his election conspiracy theories would make for good, provocative television. He was correct.

But someone tried to spoil the meeting by sending Trump a list of unflattering things Morgan has said about him over the years, presumably to piss Trump off and get him to cancel the interview. The sender is apparently based in London; Morgan thinks it was Nigel Farage but I think it was … Morgan himself. He’s not above a little “gamesmanship,” shall we say, in pursuit of a sensational story. Putting Trump in a bad mood before their televised sit-down in hopes that it would lead to conflict on camera would be a crafty move by a British tabloid journalist.

Plus, it makes for great comedy. Morgan writes about Trump chewing him out over the list in his office at Mar-a-Lago before the cameras began rolling, leaving the interview in doubt. How would Piers soothe the savage beast and get Trump to proceed? He had just the trick:

We stared at each other for a few seconds, his eyes boring into mine with all the warmth of an Arctic glacier.

It was time to change the mood music.

”I’d love to talk about your recent golf hole-in-one,” I stammered. “Your playing partner Ernie Els was raving about it.”

“In a newspaper interview I read. He said it was a brilliant shot and you played really well.”

Within a few minutes, Trump had agreed to do the interview. Flattery will get you everywhere.

Morgan tried the same tactic during the interview after it began to go sideways — and it worked again. Although only for a moment:

Incensed Trump tried to end things by declaring, “That’s it!” before I reminded him that we hadn’t discussed his hole-in-one, which he then sat down again and did — briefly — before abruptly jumping to his feet, looking hateful, and barking at the shocked crew: “TURN THE CAMERAS OFF!”

Then he turned on his heel, and sloped angrily off through a side door, loudly muttering, “SO dishonest …”

It wasn’t a rhetorical observation.

Apparently, he was later heard denouncing me as a “scumbag” and saying he wished he’d never done the interview.

European leaders should take note. A few years from now, when they’re meeting with President Trump at the NATO summit and he launches into a rant about how it’s time for the U.S. to leave the alliance, they should interrupt and ask him about his hole-in-one.

By the way, don’t look now but that other guy with his eye on 2024 is beginning to flex his political muscles outside Florida:

DeSantis’s only hope of seriously challenging Trump is by building a national profile over the next 18 months. His visit to Nevada on Laxalt’s behalf is a sign that he intends to do so and maybe earn some political favors from prominent Republicans just in case there’s a battle for endorsements in the 2024 primary. He already has built a national profile to some degree, in fact: Although he was a distant second to Trump in a recent poll of Texas Republicans, his 20 percent of the vote topped Ted Cruz and Greg Abbott. (Trump took 46 percent, short of a majority.) When Trump was removed from the equation, DeSantis won easily with 48 percent to Cruz’s 19 and Abbott’s 10. Not bad for a Floridian pitted against the two most well-known populist Republicans in Texas.

Pope Francis is Back After Surgery