Roce Today – Politics, Opinions, Gun Rights,Pro-Life and Border Wall
Home Politics Antifa and BLM terrorists have been arrested and are now facing a... 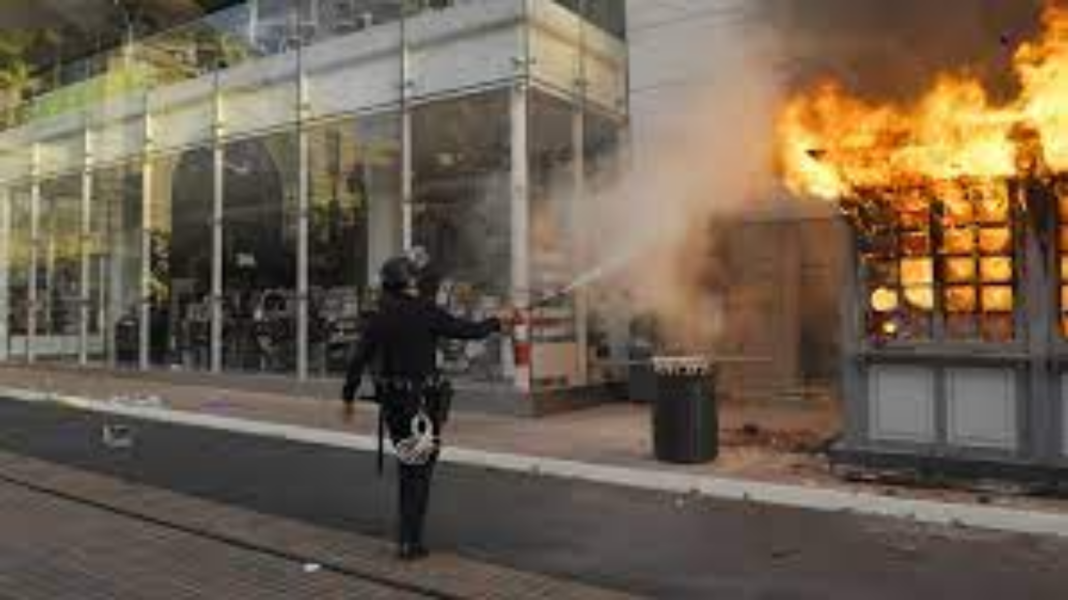 Four antifa and BLM terrorists have been arrested and are now facing a variety of federal charges in Portland (duh, where else) stemming from the ongoing *PEACEFUL* protests. Charges include multiple incidents involving explosive devices, among other things.

A 19-year-old who was arrested and accused of dismantling a card reader and intercom in the driveway of a federal building in Portland late last year had a suspicious bottle inside her backpack that drew a response from the city’s bomb squad, federal authorities say.

The bottle’s label warned: “DO NOT OPEN CONTAINS: U-DIMETHYLHYDRAZINE TRIETHYLALUMINIUM WILL IGNITE IF EXPOSED TO AIR,” next to a hand-drawn colored Hazmat placard, according to a federal complaint.

It wasn’t until days later that authorities learned the purported explosive was a hoax.

Rowan L. McManigal, the 19-year-old who federal agents say was carrying the bottle in a backpack that night, was interviewed days later and admitted the bottle only contained water and was “meant to waste people’s time,” if arrested, Federal Protective Services agent Micah Coring wrote in the complaint.

After seizing McManigal’s backpack Dec. 19, law enforcement consulted with forensic chemists from the ATF, FBI and even NASA scientists before deciding to destroy the bottle “due to the risk of exposing the contents to oxygen and the fear the chemical components may self-ignite given enough time to react with each other.”

On Dec. 22, a bomb technician and ATF agent interviewed McManigal at her home.

During that interview, McManigal said the device only held water and that it was “meant to waste people’s time if they were arrested again for just standing around,” the complaint says.

Hernandez, 56, is accused of throwing 13 objects at the windows of the Mark O. Hatfield U.S. Courthouse late March 13 into early March 14, just hours after federal officials had removed all fencing, concrete barriers and plywood from outside the building following consecutive nights of vandalism to the courthouse during mass protests.

The cost of replacing the courthouse windows is estimated at $143,513, according to a federal complaint.

Hernandez is also accused of throwing rocks at the ICE building on March 20 and April 1.

A third person, Tracy Lynn Molina, 48, is accused of failing to comply with a lawful order outside the ICE building, disorderly conduct and assault on a federal officer on Sunday.

Rowan McManigal was previously known as Daniel McManigal, and jail records identify this particular individuals as male (note that this person is 5’10” and only weighs 120 pounds). McManigal is also facing charges of Destruction Of Federal Property after *allegedly* destroying a keycard reader at the ICE building. The entire affidavit for McManigal’s arrest can be viewed here.

Tracy Molina has been arrested several times at various different *PEACEFUL* protests, pro-Antifa DA Mike Schmidt has dropped charges against her on all but one case, for which she is currently released on $400 bail, then failed to appear. Despite the latest allegations and arrest, it does not appear as though bail has been revoked, as Molina was released yet again.

Richard Hernandez could be be ruled as mentally unfit to stand trial, as he is legitimately “challenged” and is easily manipulated by other activists.

In a separate story, Malik Fard Muhammad, who was previously arrested and jailed on 28 charges, including multiple Attempted Murder charges after throwing a flaming Molotov Cocktail at police, is also now facing federal charges.

From the official Department Of Justice press release:

An Indianapolis, Indiana, man has been charged with three federal felonies after repeatedly and intentionally jeopardizing the lives of police officers, destroying public property, and encouraging others to commit violence during recent riots in Portland.

Malik Fard Muhammad, 24, has been charged by criminal complaint with possession of unregistered destructive devices, engaging in civil disorder and obstructing law enforcement, and using explosives to commit a federal felony.

According to court documents, Muhammad is alleged to have traveled to Portland with his girlfriend from their home in Indianapolis for the specific purpose of violently engaging in civil disorder during recent area riots. On September 5, 2020, during a large civil disturbance in east Portland, demonstrators threw dangerous objects at police, including commercial grade fireworks, Molotov cocktails, and bottles. At least one demonstrator was seriously burned by a Molotov cocktail thrown in the direction of police. Muhammad was present at this event and provided baseball bats to members of the crowd.

Following Muhammad’s arrest in October 2020, law enforcement seized his cell phone and found messages where he bragged about providing the baseball bats to other rioters. The cell phone also contained a shopping list including common ingredients and supplies used to make a Molotov cocktail. The day after the demonstration, police located a discarded baseball bat with a Goodwill price tag in the area where the event occurred. Police found the Goodwill store where the bat was purchased and obtained surveillance footage showing Muhammad and his girlfriend buying the bats and several “growler” bottles.

On September 21, 2020, during a large demonstration near the Multnomah County Sheriff’s Office Penumbra Kelly Building, law enforcement observed an individual light on fire and throw an object toward the building. One officer observed the burning object flying through the air toward his vehicle, landing approximately 15 feet from a police sound truck. Officers recovered the unexploded device. It consisted of a yellow glass growler with a Goodwill sticker on the bottom, a cloth wick, and an ignitable liquid. It was later determined that the growler was one of the items purchased at Goodwill by Muhammad and his girlfriend. A DNA analysis also linked the growler to Muhammad.

On September 23, 2020, protesters set fire to and broke windows at the Multnomah County Justice Center. When officers advanced toward the crowd, an individual threw a Molotov cocktail in a large yellow growler that landed in front of the officers, shattered, and exploded into a large fireball. While some officers were able to move out of the way, one officer’s leg caught fire. Several videos obtained by law enforcement show Muhammad throwing the explosive device.

On October 11, 2020, police were monitoring a protest involving approximately 250 people in downtown Portland. Members of the group began heavily vandalizing various buildings and parks including the Oregon Historical Society, Portland State University, a Starbucks coffee shop, and a Bank of America branch, among others. Law enforcement observed Muhammad in the crowed dressed in black. Investigators reported observing Muhammad using a metal baton to smash the windows of several buildings and arrested him after a short chase. Muhammad possessed a loaded pistol magazine in his pocket. A loaded pistol matching the magazine found on Muhammad’s person was found discarded near the location of his arrest.

Muhammad’s trip to Portland does not appear to be an isolated event. Investigators obtained evidence that he traveled to Louisville, Kentucky, in August 2020 to meet with anti-government and anti-authority violent extremist groups to conduct firearms and tactical training. Investigators also obtained several public social media posts by Muhammad promoting violence toward law enforcement in other cities including Kenosha, Wisconsin, and Chicago.

Muhammad had previously been released after posting $4000 in bail back in October, but at some point a warrant went out for his arrest and he was rebooked, this time on a $2,125,000 bond for the state charges. According to a different Oregonian article, the “Portland Freedom Fund” posted the bail in his name, which is 1/10th the bond amount, $212,500. Muhammad was then arrested by Federal agents on the federal charges:

An Indiana man accused of traveling to Portland last year to engage in violence and vandalism during protests, including the throwing of an explosive device towards police and smashing of windows at the Oregon Historical Society, faced federal charges in court Tuesday afternoon.

Malik Fard Muhammad, 24, was arrested and taken into custody on a U.S. Marshals hold Friday afternoon after he had been released from state custody last Wednesday when the Portland Freedom Fund posted 10%, or $212,500, of his state-ordered $ 2.1 million bail in a Multnomah County case stemming from the same alleged crimes, according to court and jail records.

He appeared in U.S. District Court in Portland on allegations of civil disorder through obstruction of law enforcement, carrying and using explosive materials to commit a federal felony, and possessing a firearm that’s not registered to him. Muhammad remains in custody. A detention hearing was set over until Wednesday afternoon.

In the RV trailer, officers recovered multiple guns, including an AR-15 rifle and a shotgun, according to the state court memo. A detective who spoke to the rifle’s owner in Indianapolis said he had met Muhammad before he traveled to Portland and claimed he was trying to recruit people to engage in an “armed takeover of a radio or television station,” and described him as a “communist revolutionary who was attempting to gather people with firearms to engage in acts of violence.”

The $212,500 provided to bail Muhammad out of jail was the largest donation that the Portland Freedom Fund made in a single case to get someone out of custody pending trial, according to its president Amanda Trujillo. It was substantially higher than the prior largest donation of $35,000, she said. The fund has posted bail for just under 100 people since the beginning of 2020, she said.

“We were fortunate to have just received a large grant,” Trujillo said. “Community members who have been supporting Malik and his partner reached out to us several weeks ago to assist. Malik is facing serious charges and it is difficult to prepare a defense from a jail cell.”

The fund’s website describes it as a “volunteer-run abolitionist organization” that is dedicated to “reducing harms perpetuated against our Black, Brown and Indigenous neighbors by the criminal justice system through posting bail so they may navigate their case from a position of freedom.” The fund is supported through donations and grant support, and its fiscal sponsor is Northwest Alliance for Alternative Media and Education, according to its president.

Muhammad was rearrested about 2:30 p.m. on Friday in Milwaukie and taken back to a Portland jail on a federal hold, according to jail records. Federal prosecutors are seeking his continued detention. The charge of carrying and using an explosive to obstruct law enforcement would bring a minimum mandatory sentence of 10 years if convicted.