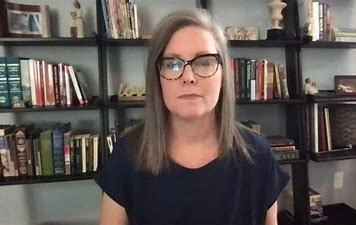 Democratic Arizona gubernatorial candidate Katie Hobbs, during a Sunday appearance on CBS’ “Face the Nation,” appeared to suggest that she was in favor of no limits on abortion.

Host Major Garrett noted that her Republican opponent Kari Lake has labeled Hobbs as an “extremist” for her view on abortion. He asked Hobbs whether she supported the current 15-week ban in Arizona or would seek a higher limit as governor.

Hobbs, who currently serves as Arizona’s Secretary of State, said Lake had misconstrued her position and said late-term abortion is “extremely rare.”

“If it’s being talked about, it’s because something has gone incredibly wrong in the pregnancy. A doctor’s not going to perform an abortion late in pregnancy just because somebody decided they want one. That is ridiculous,” Hobbs said before suggesting that Arizonans would have “government-mandated forced births that risk women’s lives” under a Kari Lake administration.

Asked what her administration’s week limit for abortion access would be, Hobbs evaded answering directly saying that abortion “is a very personal decision that belongs between a woman and her doctor.”

“The government and politicians don’t belong in that decision,” Hobbs said. “We need to let doctors perform the care that they are trained and take an oath to perform.”

“So, if an Arizona voter were to conclude from your previous answer that you do not favor any specific week limit on abortion, would they be correct?” Garrett asked.

Hobbs repeated her initial answer: “I support leaving the decision between a woman and her doctor and leaving politicians entirely out of it.”

Fox News Digital has reached out to Hobbs’ campaign for comment.

Arizona doctors stopped performing abortions late last month after a judge in Tucson ruled that prosecutors can enforce a law dating to 1864 that bans abortion unless it’s necessary to save a woman’s life. Arizona also has a law passed this year that bans abortion after 15 weeks, creating speculation about what’s allowed.

Democrats have seized on the ruling, which revived the issue ahead of next month’s midterm elections. Democratic lawmakers sent a letter on Tuesday asking Republican Gov. Doug Ducey to call a special session of the Legislature to repeal the 1864 abortion ban.

Lake has spoken positively of Arizona’s total ban on abortion, which she called “a great law that’s already on the books.” She has called abortion “the ultimate sin,” said abortion pills should be illegal and that she would sign a bill banning abortion as soon as fetal cardiac activity can be detected, usually around six weeks gestational age and before many women know they’re pregnant.