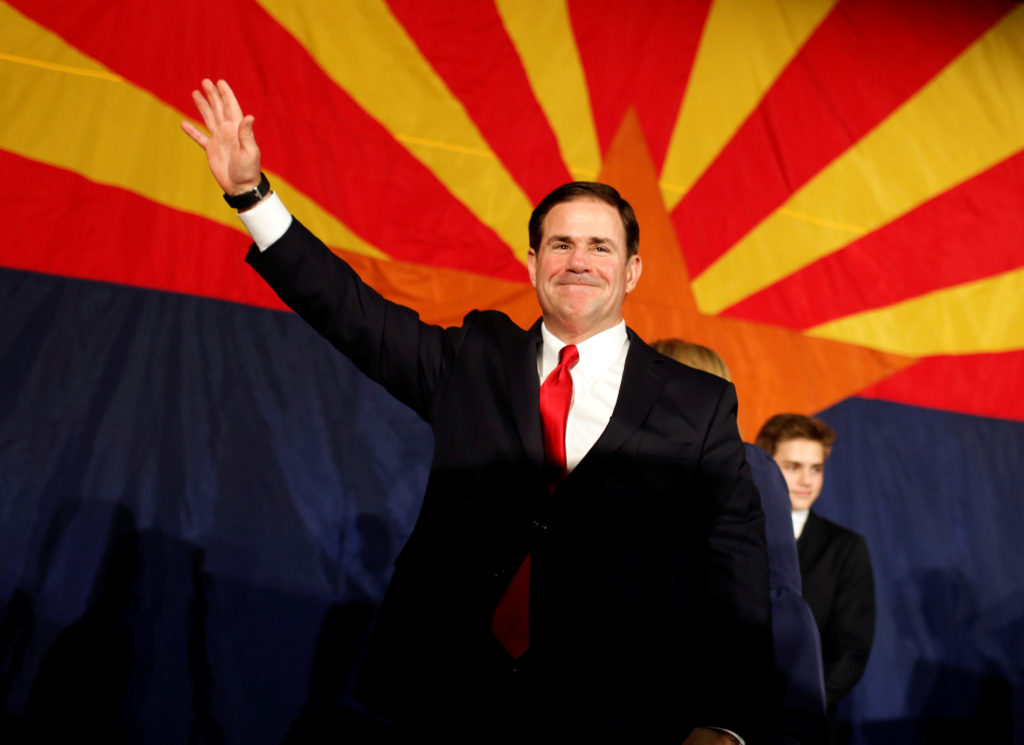 PHOENIX (AP) — Arizona Gov. Doug Ducey on Tuesday signed a sweeping anti-abortion bill that bans the procedure if the woman is seeking it solely because a fetus has a genetic abnormality such as Down syndrome.

Doctors who perform an abortion solely because the child has a survivable genetic issue can face felony charges. The proposal also contains a raft of other provisions sought by abortion opponents.

The measure passed the Republican-controlled Legislature on party-line votes over unanimous opposition from minority Democrats. The Republican governor is an abortion opponent who has never vetoed a piece of anti-abortion legislation.

Senate Bill 1457 moved through the Legislature in fits and starts, stalling twice before moving again amid intense pressure by abortion opponents on GOP lawmakers who opposed some of its provisions. It finally passed both chambers last week.

The abortion bill as originally written made it a felony for a doctor to perform the procedure because the fetus has a genetic abnormality such as Down syndrome, and contained a slew of other provisions, including one that confers all civil rights to unborn children. Democrats call that “personhood” provision a backdoor way to allow criminal charges against a woman who has an abortion.

In addition to the ban on abortions for genetic abnormalities and the “personhood” provision, the bill bans mail delivery of abortion-inducing medication, allows the father or maternal grandparents of a fetus aborted because of a genetic issue to sue, and bans the spending of any state money toward organizations that provide abortion care.

The measure also requires fetal remains to be buried or cremated, and it forbids state universities from providing abortion care.

“There’s immeasurable value in every single life — regardless of genetic makeup,” Ducey said in a statement. “We will continue to prioritize protecting life in our preborn children, and this legislation goes a long way in protecting real human lives.”

The bill was amended twice to allay the concerns of a pair of Republicans — one worried that a woman would be forced to carry a fetus that could not survive and a second concerned that a doctors’ medical decisions could be overruled by a jury. That GOP-backed amendment also clarified that the “personhood” provision does not ban in-vitro fertilization.

The Democrats issued a lengthy written rebuttal to the bill after the final amendment.

The measure was a top priority for the social conservative group Center for Arizona Policy. Its president, Cathi Herrod, routinely backs anti-abortion bills in the Legislature. National anti-abortion groups hailed its passage.

Minutes after the governor acted, Herrod sent out a news release with the subject line “Life Wins!”

“Today, Arizonans win. Arizona children diagnosed with disabilities prior to birth will no longer be discriminated against,” Herrod wrote in the release. “Arizona women will be ensured commonsense safeguards if they choose the abortion pill. Arizona taxpayers will not be forced to support abortions at public colleges and universities, and the laws of Arizona will be interpreted to value all human life.”

Abortion rights groups had rallied at the Capitol on Monday, urging Ducey to veto the measure and presenting him with petitions signed by opponents of the bill.

“Gov. Ducey’s decision to sign SB1457 is not pro-life. It is anti-families, anti-woman, and anti-doctor,” Espinoza tweeted. “I’m disappointed to see Arizona moving in this direction, ignoring the needs and desires of doctors, women, and families for an extreme political agenda.”

Republican-controlled legislatures in Arizona and several other states — emboldened by the possibility that a more conservative U.S. Supreme Court could overturn Roe vs. Wade, the 1973 decision that found women have a constitutional right to seek an abortion — have embraced proposals this year that could completely ban abortion. An Arizona proposal doing that, however, has not advanced.

Earlier this month, a divided federal appeals court lifted the hold on a similar Ohio law that prohibits doctors from performing abortions based on a fetal diagnosis of Down syndrome.

Judges of the 6th U.S. Circuit Court of Appeals narrowly reversed two earlier decisions blocking enforcement of Ohio’s 2017 law. A majority of the appeals court said the law doesn’t impede a woman’s right to an abortion.

Monday’s amendment to the Arizona bill also added a legislative intent clause that included much of the reasoning the appeals court used in the Ohio decision.

Covid-19:Florida is Drawing more Tourists now than it did before the...

8 Things You Have To Know Before Coming To Colombia