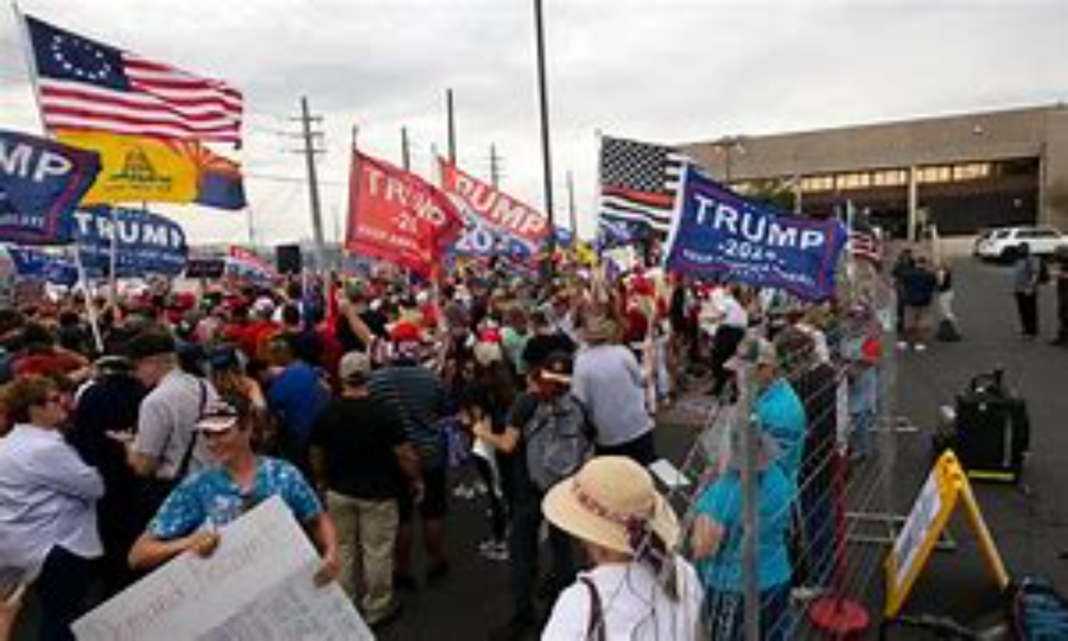 Audit officials had to be escorted out of the building to protect from disgruntled leftists who want this audit to stop.

Conradson: So, we found out that over 74,000 ballots are missing documentation of ever even being mailed out, mail-in ballots that were never mailed out to voters. What do you think of that?

Borrelli: Well, there’s either a huge administrative oversight or there’s something going on that we need to further investigate, you know, and it’s really a shame that the county will not cooperate with us, and to be able to answer some of these questions that we have. So it’s kind of like what are you hiding Are you hiding anything? Are you afraid of what we may find? Or are you afraid of what you know we may find? So when you find these kinds of things they stick out like a sore thumb. We say hey we found this can you come to the table and help us kind of come to reconciliation to find out what this process is? If there’s a flaw in the system we need to understand what that is so we can prospectively fix that. If it’s not a flaw in the system and somebody actually did something and breached the system. We need to find that out too and it may not be their fault, we’re not saying that. But you know what, you can’t run away from that when you see evidence of some kind of wrongdoing, you just can’t turn away, you have to try to address it. That’s what you’re supposed to do as an elected official, that’s what we’re trying to do as elected officials for us ourselves, the legislature has plenty of authority over elections we can delegate that authority on the county level, but the overall responsibility falls on us, we are within our total legal purview to inspect and and and do an audit of just about any election process in the state. So, Maricopa County is the largest county this is where we chose them and hopefully we thought, maybe we obviously calculated wrong with four or five supervisors, being Republicans you would think they would get some cooperation but, unfortunately, we’re not getting that so this is still continuing process there’s an update, a briefing of what we’ve gotten so far, and there’s a lot of questions that need to be asked and so I believe President Fann’s going to be reaching out to the County asking for more items, that we need to complete the audit, for example, the routers, we still need the routers, we still need the passwords, and the hardware tokens so to complete the forensic part about the data stuff on the machines. So those are the things we’re going to continue to pursue, we’re not letting go. We’re going to get this done, We’re not gonna have an incomplete report. this is not gonna be incomplete to audit, we have to get all this stuff done. Because if you can’t get it done and we find out all this stuff. I mean how do you certify something with all these questions, so we’re gonna continue to march and not let go, we’re gonna get this done for the people, period.

Conradson: Another example of this, either bad system or intentional error, Senate President Karen Fann said something about maybe 25 ballots coming from one single-family home with two people living in it. Why do you think it is that Joe Biden wants to send his goons door to door to knock and vaccine intimidate, but he is afraid to canvass for voter integrity?

Borrelli: Right, right, the Department of Justice did some saber-rattling last month, it says we can’t go door to door and canvass an election which is ridiculous. It is not voter intimidation. Voter intimidation is prior to an election. So if you’re asking questions, how you’re going to vote in the next election for the next candidate, isn’t that a poll question? Okay, but after an election, “Hey, excuse me, sir, did you vote in the last election ?” “Yes” “Did you vote by mail or did you vote in person?”. These are the type of questions, they’re not, “who did you vote for?”  It’s “how did you vote in the last election? By the way, do you know these other people that are registered to vote at your address? you don’t know them, did you get a ballot for them in the mail? Why is it that, that’s somehow voter intimidation, but knocking on someone’s door asking their personal health questions like did you get the COVID vaccine or other personal health information, somehow that’s okay? So the hypocrisy is all over the place, you know, in the Democratic Party platform in 2020, they encouraged post-election audits, but now they kind of forget that so but that’s okay. Is the Democrat D, deflect, distort, distract, deceive, whatever.

Conradson: So, we know that we need routers and passwords, and spunklogs. We need at the spunk logs. They’ve requested that the Senate come back with another subpoena. What is the next step after that, are we going to see enforcement of subpoenas?

Borrelli: We’ll leave that up to President Fann, she’s going to reach out to the county. If she does issue another subpoena, and if they continue to defy us there’s another tool in the toolbox that is ready, I have it already pre-loaded, ready to launch when we need to do that but we’ll see if we can get this done diplomatically instead of messing around and going to court.

The Democrats including Stephen Richer pulled the switcharoo and said they’re pro-audit but this is clearly not the case.

These subpoenaed materials have still not been received by auditors and new subpoenas will be issued for routers, passwords, and spunk logs in order to finish the full forensic audit.

The power to issue a subpoena is useless without the power to enforce them. We can rest assured that the Arizona Senate will enforce the subpoenas.

Don’t believe the lie about stocks