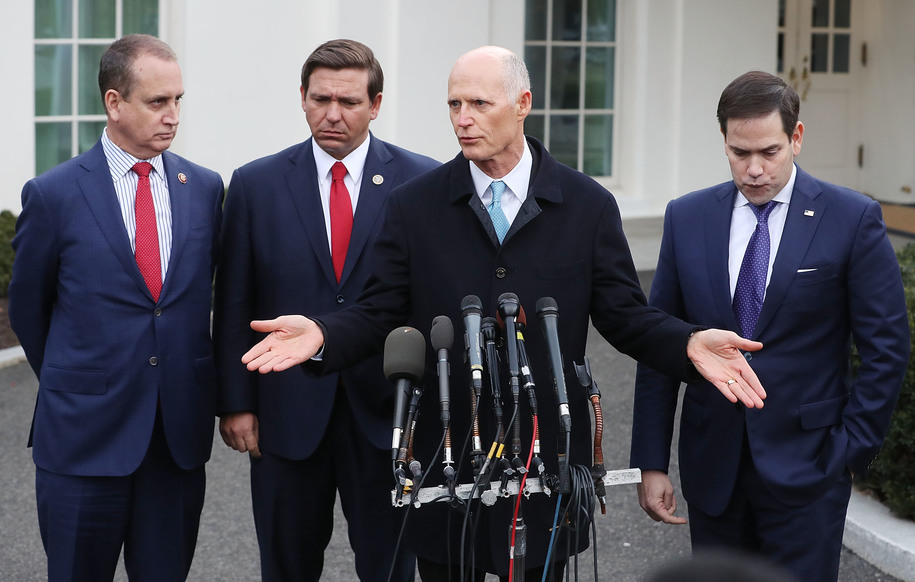 The response from Florida Gov. Ron DeSantis? Surely, you jest.

“It doesn’t make any sense,” DeSantis told Politico of Scott’s entreaty. DeSantis said rejecting the billions in funding would only make the money more likely to be redirected to blue states (which isn’t necessarily true). “I don’t think that would make sense for Floridians,” DeSantis said, “for us to be giving even more money to the blue states that already getting such a big windfall in this bill.”

The tension between Scott, who is chair of the National Republican Senatorial Committee, and DeSantis is emblematic of a bigger disconnect between Washington Republicans and state GOP executives and mayors, many of whom have welcomed the federal assistance. On top of that, there’s no love lost between DeSantis and Scott, who both appear to have designs on running for president in 2024.

President Biden’s rescue plan included some $360 billion to help states and cities address the ongoing the pandemic. Immediately following final passage of the bill, Scott issued an open letter to governors and mayors, calling on them to return what he called “massive, wasteful and non-targeted” money.

“By rejecting and returning any unneeded funds, as well as funds unrelated to COVID-19, you would be taking responsible action to avoid wasting scarce tax dollars,” Scott wrote.

But DeSantis already has big plans for the roughly $10 billion that could flow to his state through the trillion-dollar federal relief package. At a press conference last week, DeSantis said the money could be a “game changer” for his effort to address the dangers of flooding and sea level rise. “It’s infrastructure we would have needed to have done anyways,” he noted. Since then, DeSantis has also mentioned making one-time payments to first responders and boosting tourism marketing.

DeSantis even took his opposition to Scott’s call a step further when he effectively blamed him and the state’s other U.S. senator—Marco Rubio—for not claiming more of the federal dollars for Sunshine State residents. “The Senate didn’t correct the fact that Florida is getting a lot less than what we would be entitled to on a per capita basis,” DeSantis added, according to The Palm Beach Post.

Clearly, whatever angle Senate Republicans think could help them in 2022, DeSantis thinks it’s a political loser in his his state, where Rubio will be fighting for reelection next year.

Scott’s office apparently declined to give Politico a response regarding the snub from DeSantis.