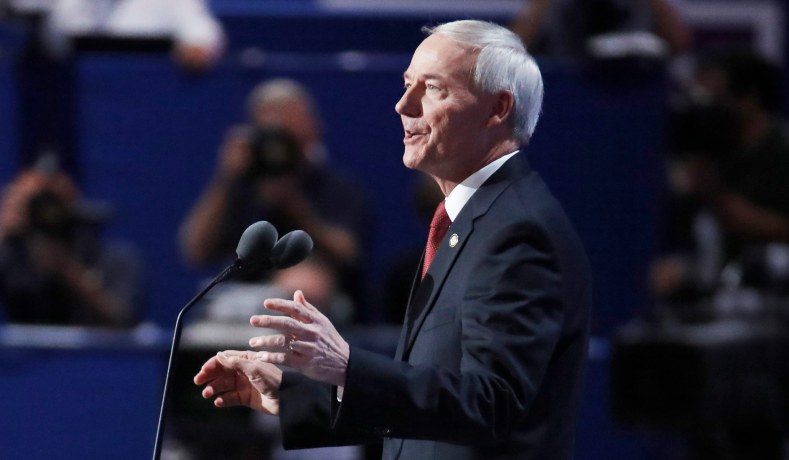 Arkansas governor Asa Hutchinson — after an embarrassing appearance on Tucker Carlson Tonight spent trying to explain his veto of a bill meant to protect transgender children from experimental hormone treatments and gender-reassignment surgeries — has fled for the friendlier pastures of the New York Times. His answers, while less flagrantly nonsensical in written form, still reflect the indefensible nature of his position.

Asked why he opposes the bill, Hutchinson again leans on buzzwords such as “overbroad,” calling it the “most extreme” in the country. The only specific provision he could cite in support of his thesis was that children currently being subjected to these euphemistic treatments would not be grandfathered in and allowed to continue them. This only follows if you believe these procedures and treatments to be justifiable in the first place — a case Hutchinson makes nowhere in the interview.

Asked why he signed other bills related to the issue that barred biological males who have transitioned or are transitioning from participating in women’s sports and allowed for conscience exemptions permitting medical workers not to participate in transition-related procedures but not this latest measure, Hutchinson explained that, when this measure his desk, he said, “We’ve got to show greater tolerance. We’ve got to show greater compassion.” This is a platitudinal dodge. There’s nothing compassionate about allowing troubled children to be swept up not only psychologically, but also physically in a new social and political movement. As for tolerance, nothing in the bill calls for hatred or discrimination toward those afflicted with gender dysphoria.

Asked if all three bills constitute “laws in search of a problem,” Hutchinson basically concurs. “That’s one of the biggest problems in the cultural war that we have — sometimes we’re trying to address the fear of something that does not exist in reality,” he says. Is that so? Children are being subjected to experimental treatments and mutilating surgeries as proposed solutions to a condition that is often grown out of with time. Moreover, the number of children with gender dysphoria is proliferating as transgender ideology expands into our schools and other elite institutions such as the New York Times.

Asked about his personal concerns over the GOP’s approach to cultural issues, Hutchinson responds:

. . . as we support our social conservatives and we fight for these issues, we still have to ask the question, is this a proper role of government? Is this something that should be managed through families and churches and where they impact the culture or are we going to fight every battle by the state trying to change the culture or preserve the culture?

Hutchinson does not explain what principle of limited government, precisely, calls for showing restraint in safeguarding children’s physical development while they remain mentally and emotionally incapable of making life-changing medical decisions for themselves. One of the more frustrating aspects of our politics is that while progressives continue to use the state to push their cultural agenda, conservative efforts to push back are regarded as a myopia with the “culture war.” Hutchinson evidently buys in to this manifestly absurd framing.

Asked what he would say to those who might lose access to transition-related treatments because of the legislation, Hutchinson says he hopes “that they have a sense that the highest official in Arkansas supports them.” I would hope every American supports children suffering from gender dysphoria or any other affliction. Support does not, however, mean indulging a child’s weighty and ill-founded decisions about permanently changing their body’s form and chemical composition.

Altogether, it was another unimpressive performance by a man who shows little command of this important issue, and less still of our political moment.

US pledges support for Ukraine amid tensions with Russia | News...