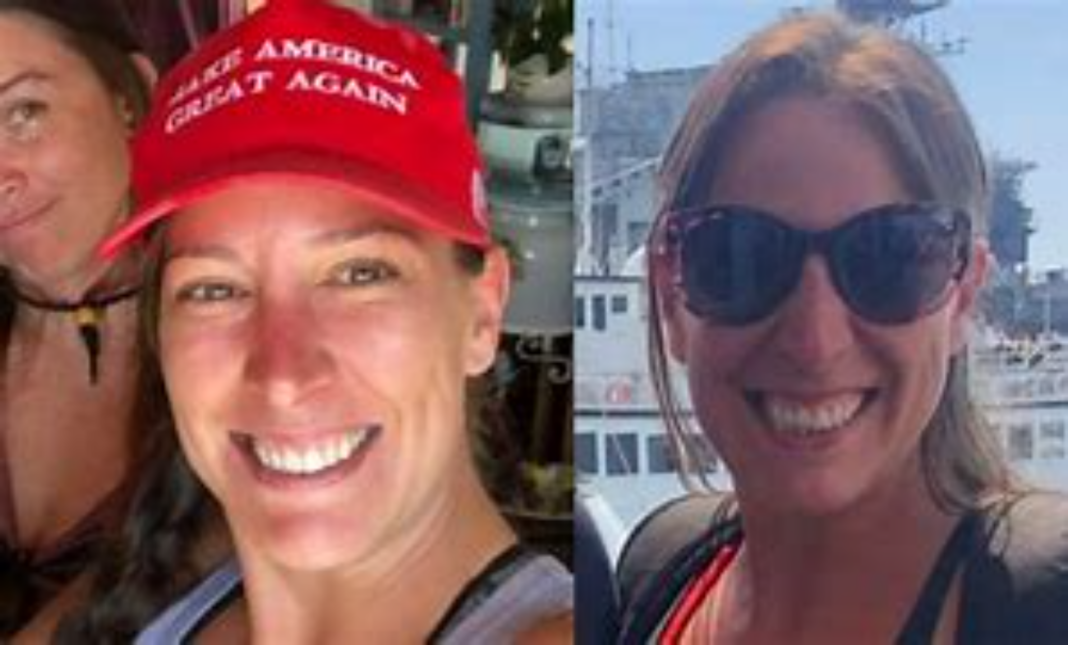 Ashli Babbitt‘s husband Aaron Babbitt and Attorney Terrell Roberts joined Tucker Carlson earlier this month to discuss the continued challenges they have had getting any information on her death or the identity of her government-employed killer.

During the discussion, Tucker Carlson asked Attorney Roberts about the report that Ashli’s shooter also left his loaded gun in a US Capitol restroom

Tucker Carlson:  Mr. Roberts, let me ask you, there are reports online, that’s incredible I don’t know if they’re true, that the Capitol Hill police officer who shot Ashli Babbitt, I’m not going to mention the name, was the same officer that left his loaded handgun in a public men’s room on the Capitol.  Do you believe that is the officer, it seems like a very reckless person, who shot and killed Ashli Babbitt on January 6th?

We reposted this video segment report earlier this month.

So we still do not know the name of the shooter after five months.

And now the Spectator released information on Wednesday that the shooter may be a member of Mike Pence’s security detail.

“Sources close to and within the intelligence community tell Cockburn that Babbitt was actually shot by a member of VP Mike Pence’s protective detail … one person asserted to Cockburn over drinks in DC that this is ‘basically an open secret’ in the IC”https://t.co/H7wQ3c0Zpj

This would be big, if true.
We reached out to the Babbitt family attorneys. We were told tonight that they will look into this allegation.
And – we will post an update when we hear more from them.

Sources close to and within the intelligence community tell Cockburn that Babbitt was actually shot by a member of then-vice president Mike Pence’s protective detail. The VP’s detail, of course, is provided by US Secret Service, not the Capitol Police. One person asserted to Cockburn over drinks in DC that this is ‘basically an open secret’ in the intelligence community.

Law enforcement sources suggested to Cockburn that the Capitol Police Department and Department of Justice have publicly identified the shooter as a Capitol Police officer in order to protect the reputation of the Secret Service. Cockburn also wonders if this isn’t an attempt to protect Pence from further anger or threats from Capitol rioters who wanted him to refuse to certify the results of the election on January 6.

A cover-up of this nature would also explain why the government hasn’t been forthcoming with other information about the alleged Capitol Police officer who they say shot Babbitt. Police officers who are involved in shootings are almost always identified publicly. The unnamed officer’s lawyer says that his client is being kept anonymous due to threats against his life. Babbitt’s family, however, argues that they have a right to know who shot and killed their beloved relative. Her husband, Aaron Babbitt, is suing Washington DC for access to records that would supposedly reveal the name of the officer.

From our previous report on February 25th–

The Police Lieutenant’s name is being withheld from Ashli Babbit’s attorneys.

This is the Officer responsible for using excessive force and executing Ashli Babbitt.

Before killing Ashli, the Officer is seen aiming his firearm at fellow colleagues.

You can see the Officer disregards nearly every basic firearm safety rule in the book. His finger is wrapped around the trigger, while his firearm is aimed in the direction of his colleagues.

Original photo: Notice how the other Officers are properly handling their firearms and don’t have a finger wrapped around the trigger?

The Officer can be seen wearing what seems to be the identical handkerchief, tie, and insignia.

Here is the same picture but zoomed in, Antifa organizer John Sullivan is also pictured.

SIDE BY SIDE COMPARISION

The Capitol Police Officers statement regarding the killing of Ashli Babbitt

The Officer could not see three uniformed Officers against the wall nearest to Ashli, was not able to see how far down the crowd extended, saw a hallway full of “oncoming people“, and claims Ashli Babbitt wearing a backpack compounded his fears leading to the shooting.

He contradicted himself multiple times in one statement. If he is telling the truth about not seeing the Officers, he is lying about Ashli Babbitt’s backpack compounding to his fears.

Unless he has X-Ray Vision.

Mark Schamel, the defense attorney representing the shooter issued a statement regarding his client and the shooting of Ashli Babbitt.

“If he’s not cleared, we don’t have a country we want to live in anymore.” – Mark Schamel

William Burns:CIA Director in Moscow to Meet with the Russian Security...