Home International News Australia:Cops slammed for checking if a man’s coffee cup is empty to... 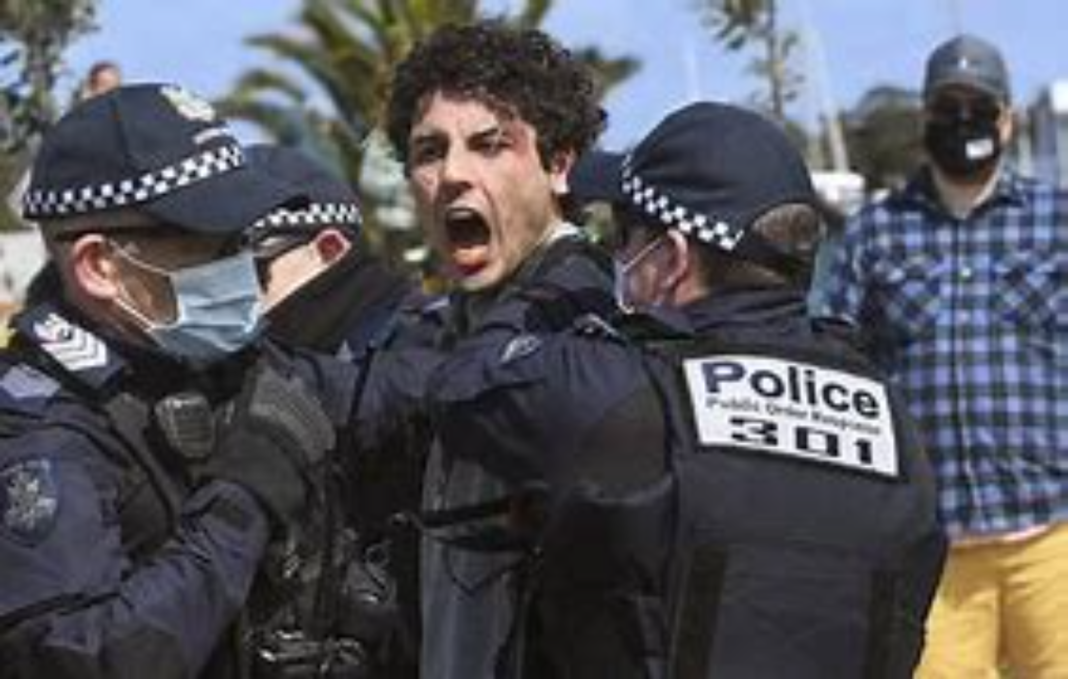 Video footage of Melbourne police checking whether a man’s coffee cup is empty to see if he’s faking his excuse for not wearing a mask is stirring the latest round of online outrage over Australia’s dystopian Covid-19 policies.

While it is unclear when exactly the video was recorded, the clip went viral on social media on Friday and Saturday, showing several police confronting a man on what appears to be a park trail. One of the officers grabs the man’s coffee cup while asking, “Do you mind if I check if there’s actually anything in that?” He shakes the cup, and after apparently proving that there’s liquid inside, he backs away and tells the man, “Enjoy your coffee.”

The 10-second clip ends with the coffee drinker telling the police, “Jesus loves you all. God bless. I’ll be praying for you all.”

While the parkgoer dealt with the confrontation calmly and cordially, and it remains unclear when exactly the footage was recorded, and online observers expressed their shock over yet another example of Australia’s apparent Covid-19 “authoritarianism.”

Melbourne Police grabs a guy’s coffee cup to check if there is coffee in it otherwise, he would of fined him for not wearing a mask 👀Coffee is known to kill COVID 🙃☕️ pic.twitter.com/7wUB1lBXDF

Australian podcast host Diogo Correa Coelho said the man would have been fined if police had found his cup to be empty. Pointing out the absurdity of the beverage crackdown, he quipped, “Coffee is known to kill Covid.”

Other Twitter users pointed to the incident as an indication of how severely personal freedoms have been crushed in the Covid-19 era. One commenter tweeted: “Two years ago, if anybody had said, in the future, groups of police officers will be checking to see whether you are carrying an empty coffee cup to avoid wearing a mask… we would have laughed in their face.”

Many observers pointed out the ridiculousness of supposedly protecting people against the spread of a virus by touching a man’s coffee cup while wearing a presumably dirty glove and giving it back to him. As one critic noted, the police officer “touched the coffee cup, thereby increasing the likelihood of transmission, all because someone is enjoying a walk – outside, where the likelihood of transmission is extremely low. But science.”

It’s a police state, when you have a policeman checking your coffee cup so he can fine you for not wearing a mask if it’s empty. Defunding the police seems like the natural next step. This country is in a big authoritarian mess with no leaders

Others made Nazi comparisons, such as calling the Melbourne police “coffee cup Gestapo.” One commenter argued that only a “police state” would officers check someone’s coffee cup so they can fine the citizen for not wearing a mask if it’s empty.

Social media users appeared to give the police no slack for just following orders from higher-ups. Still other observers tried to illustrate the alleged police overreach through humor.

“I am about to go long coffee beans,” one Twitter user said. “This gentleman just found another utility for java. It’s a face-diaper exemption card.” Another commenter sarcastically praised the officers for their bravery, saying, “If just one person is saved, it is worth losing your freedom.”

But many critics suggested that the obliteration of individual liberties in the name of fighting the pandemic won’t be easily reversed. “These people aren’t getting their freedom back unless there’s a complete turnaround of their entire government,” one commenter tweeted.

Australia has imposed some of the world’s most stringent pandemic restrictions under its so-called “Covid zero” strategy of trying to completely shut down the virus. New South Wales chief health officer Dr. Kerry Chant, who advised residents in July to refrain from having conversations with people, later said Australians may have to continue wearing masks for years.

Residents of Melbourne have been subjected to the world’s longest Covid-19 lockdown, which has dragged on for more than eight months. The restrictions were eased marginally on September 29, when the state of Victoria hit its 80% first dose vaccination goal. The state’s premier, Daniel Andrews, promised to finally lift the lockdown on October 22, when 70% of residents aged over 16 are projected to be doubled-dosed.