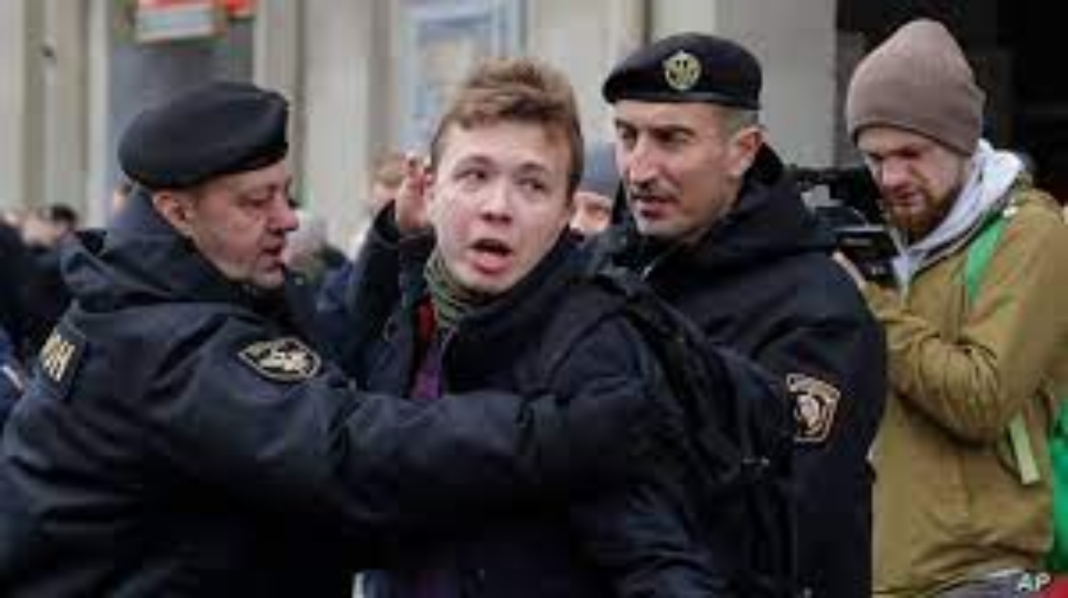 VILNIUS, Lithuania — A prominent opponent of Belarus’ authoritarian president was arrested Sunday after the airliner in which he was traveling was diverted to the country after a bomb threat, in what the opposition and Western officials denounced as a hijacking operation by the government.

Raman Pratasevich, who faces charges that could bring 15 years in prison, was aboard the Ryanair flight from Athens, Greece, to the Lithuanian capital of Vilnius when it changed course to head for Minsk.

“I saw this Belarusian guy with girlfriend sitting right behind us. He freaked out when the pilot said the plane is diverted to Minsk. He said there’s death penalty awaiting him there,” passenger Marius Rutkauskas said after the plane arrived in Vilnius following several hours in the Belarusian capital.

“We sat for an hour after the landing. Then they started releasing passengers and took those two. We did not see them again” Rutkauskas said.

Flight tracker sites indicated the plane was about 10 kilometers (six miles) from the Lithuanian border when it was diverted. There were conflicting accounts of the move.

The press service of Belarusian President Alexander Lukashenko said the president himself ordered that a MiG-29 fighter jet accompany the airliner after he was informed of the bomb threat. Deputy air force commander Andrei Gurtsevich said the plane’s crew made the decision to land in Minsk.

But Ryanair said in a statement that Belarusian air traffic control instructed the plane to divert to the capital.

Lithuanian President Gitanas Nauseda called the incident a “state-sponsored terror act.” He said that the European Council would discuss the case Monday and that he would propose banning Belarusian planes from European Union airports and “serious sanctions” against Lukashenko’s government.

“Belarusian airspace is completely unsafe for any commercial flight, and it should be deemed this not only by the EU but by the international community. Because now, this instrument could be used for any plane crossing Belarusian airspace,” said Lithuania’s foreign minister, Gabrielius Landsbergis.

Pratasevich is a co-founder of the Telegram messaging app’s Nexta channel, which Belarus last year declared as extremist after it was used to help organize major protests against Lukashenko. The protests have dwindled in recent months, but Belarus authorities are continuing to crack down on opposition with arrests.

The Belarus presidential press service said the bomb threat was received while the plane was over Belarusian territory. Officials later said no explosives were found onboard.

Passengers were taken off the plane in Minsk. After the plane arrived in Vilnius, Defense Minister Arvydas Anusauskas said Pratasevich’s girlfriend and four other people did not reboard.

“We will find out who are the other four that did not travel with the rest. Lithuania has launched an investigation to find out what really happened on that plane,” he said on Facebook.

“It is absolutely obvious that this is an operation by the special services to hijack an aircraft in order to detain activist and blogger Raman Pratasevich,” she said in a statement. “Not a single person who flies over Belarus can be sure of his safety.”

The ICAO later said it “is strongly concerned by the apparent forced landing.”

German Foreign Minister Heiko Maas said that “such an act cannot be left without definite consequences from the side of the European Union” and called for Pratasevich to be released.

Police cracked down on the protests harshly, detaining around 30,000 people and beating many of them.

Although protests died down during the winter, Belarus has continued to take actions against the opposition and independent news media. Last week, 11 staff members of the TUT.by news website were detained by police.

Arizona: Migrant deaths continue to rise due to the heat at...