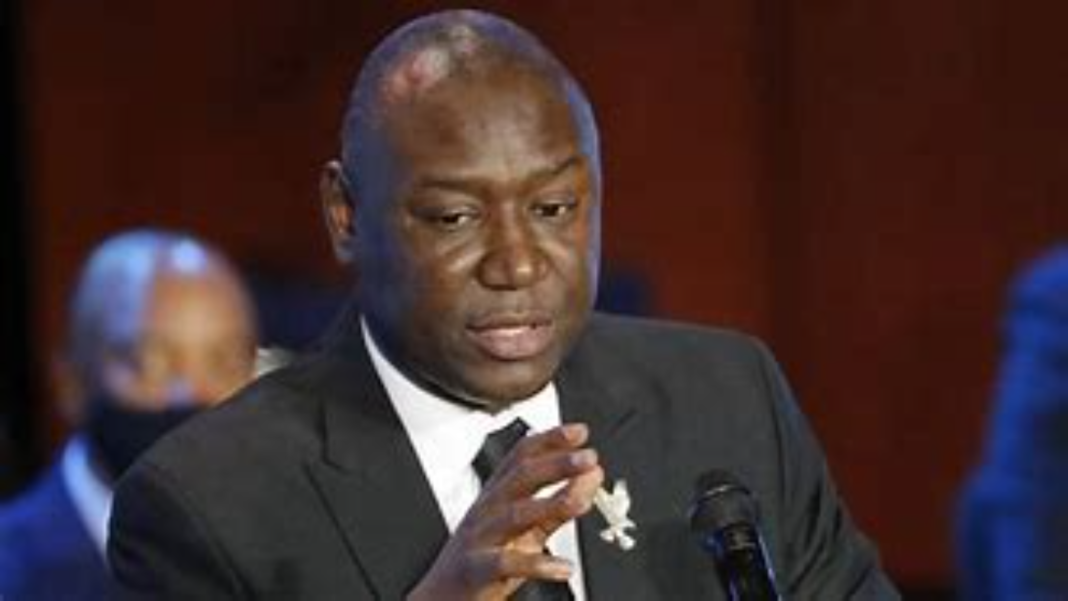 COLUMBIA, S.C. — A prominent civil rights attorney on Tuesday demanded that a South Carolina prosecutor revisit a case and criminally charge the two jail employees who stunned a mentally ill Black man 10 times and kneeled on his back until he stopped breathing.

Ninth Circuit Solicitor Scarlett Wilson announced in July that the Charleston County jail deputies who were seen on surveillance video restraining Jamal Sutherland wouldn’t face charges. Wilson called the deputies’ actions “damning,” but said she couldn’t prove the guards intended to kill Sutherland, who at the time was refusing to go to his bond hearing.

Attorney Ben Crump joined Sutherland’s relatives outside Wilson’s office to call on the solicitor to reconsider her decision, arguing she had gathered enough evidence throughout her monthslong investigation to charge the former deputies with involuntary manslaughter.

“We all know what the truth is — that they unjustly killed a young Black man who was having a mental health crisis,” Crump said. “He had committed no crime. It wasn’t like he was a hardened criminal. This was a child who needed a helping hand.”

The Florida-based attorney has represented the families of a number of Black people who have died at the hands of police and vigilantes in recent years. He compared Sutherland’s death to two cases he has litigated — the killings of George Floyd in Minneapolis and Ahmaud Arbery in Georgia. The deaths of those men were also captured on video, and charges were eventually filed in both of those cases.

Sutherland, 31, had been booked into the jail the day before his death on a misdemeanor charge. Officers had arrested him while investigating a fight at the mental health and substance abuse center where he was receiving treatment for schizophrenia and bipolar disorder. His death drew national attention after county officials released video of the incident months later.

Amy Sutherland, Jamal’s mother, expressed frustration Tuesday over the number of times the family met with Wilson’s office as the investigation moved forward, saying it seemed like the decision not to charge the deputies was predetermined.

In a statement, Wilson said Tuesday that she understood “the frustration that some may have with my decision.” The solicitor added that she had invited the U.S. Department of Justice to look into the case in April and that she wouldn’t interfere with any review by federal authorities or the state Attorney General’s Office.

“While I stand by my decision, I welcome the review of other prosecutors, especially those with different statutory opinions,” Wilson said.

Charleston County Sheriff Kristin Graziano was sworn into office the day before Sutherland died. She has promised wide-ranging changes to jail operations, including how those with mental illnesses are treated.

Wilson had said the jail employees were merely following training that had fostered a “militaristic culture” at the jail. She said that prior to the incident, the guards tried to talk Sutherland into voluntarily going to the hearing for 15 minutes, asking supervisors if they could do something other than attack him. But they received no help, so the deputies did what they were trained to do, Wilson said — use the Taser or pepper spray.

But that rationale wasn’t adequate to Crump, who said the guards shot Sutherland with a stun gun too many times and for too long, and then put a “spit mask” on him: “At some point, it just becomes reckless, reckless, reckless,” Crump said.

In the videos released in May, a deputy enters Sutherland’s cell, trying to handcuff him. The deputies stun him and, with the electrodes still on Sutherland, a second officer fires the stun gun again.

Sutherland can be heard saying, “I’m not resisting, officer.”

Sutherland was eventually placed in handcuffs with a deputy’s knee on his back for more than two minutes. “I can’t breathe,” Sutherland said.

Attorney Carl Solomon also said one of the deputies involved has a history of excessive use of force, noting Fickett was sued by a former inmate in 2016 over improper use of his stun gun. That federal suit, which also named former Charleston Sheriff Al Cannon and several other deputies, was settled in 2019.

Officials said in July that a federal investigation remained open to see if Sutherland’s civil rights were violated.