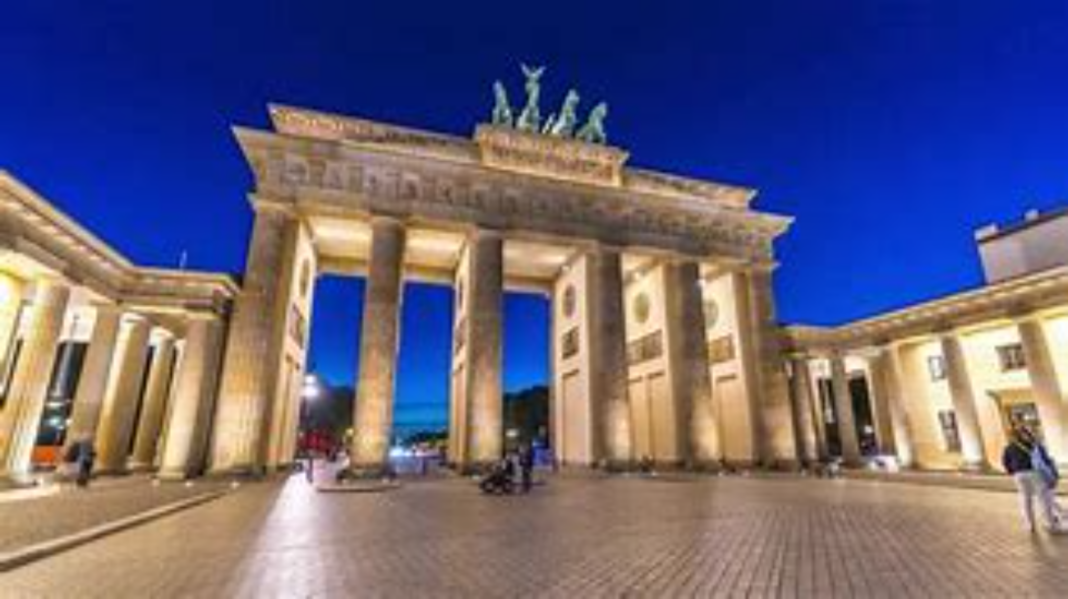 “Brandenburg Gate Closed” — that was the headline used by the Associated Press (AP) news agency in the early hours of August 13, 1961, to announce a truly momentous event: the beginning of the construction of the Berlin Wall.

Built along the fault line between the East and West, it immediately became a symbol of oppression and division. East Germany’s National People’s Army (NVA) and construction crews loyal to the communist German Democratic Republic, or GDR, were deployed to cut off all access routes to West Berlin, initially in most locations with barbed wire.

Erich Honecker, later to become East Germany’s leader, was at the head of “Operation Secure the Border.” The aim: to literally cement the division of Berlin.

That was quickly followed by construction of a steel and concrete perimeter wall with a forbidding height of just short of 3.5 meters (12 feet) that surrounded the whole of West Berlin.

The aim was to prevent any more people from fleeing the GDR. At least 2.6 million people had already done so since its founding in 1949. They sought better lives across the border in West Germany, which was officially known as the Federal Republic of Germany (FRG). A better life not just materially — but also culturally and politically.

The mass exodus from East Germany had pushed it close to collapse. There were not enough doctors, not enough skilled workers. So, to prevent the situation from deteriorating further, the country’s leaders concluded that there was just one solution: the Berlin Wall.

However, according to East German propaganda, the Wall was not designed to keep people in; rather, to keep people out: “We can only continue to live in peace if we put a stop to the activities of West German revanchists.” 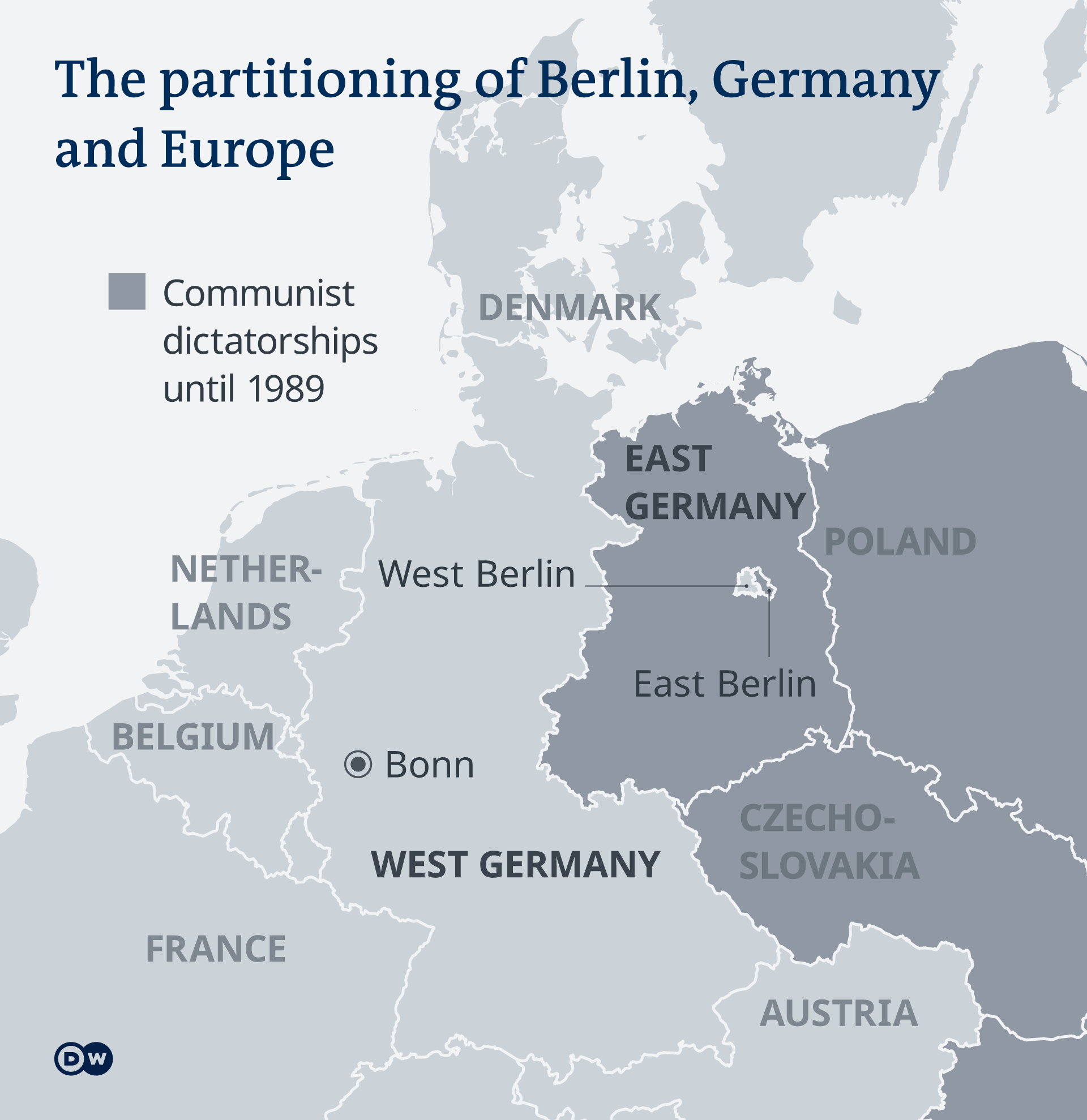 Such aggressive rhetoric was typical of a time when the communist Soviet Union and capitalist America were caught up in a bitter rivalry to demonstrate which of the two superpowers could offer the best blueprint for a political system and society.

The GDR sided with the Soviets, while the FRG was firmly allied to the American camp. The danger of a third world war and possible nuclear conflict was very real. The two sides spiraled into an arms race and there was much talk of the threat of mutually assured destruction.

The Cold War, as it came to be known, would only really come to an end with the Fall of the Berlin Wall in 1989 — 28 years after it was erected. 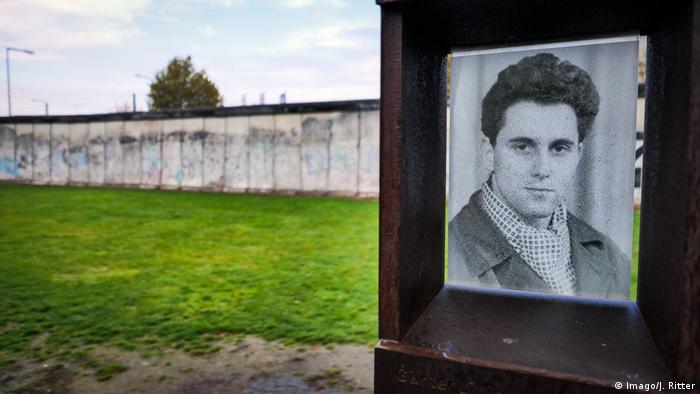 The Berlin Wall Memorial commemorates victims like Günter Litfin, who lost his life attempting to flee to the West

‘Island of freedom in a communist sea’

Between 1933 and 1945, Berlin was associated with the murderous Nazi control of Germany and much of the rest of Europe.

After the war, however, the city was carved up and handed over to the victorious powers in the form of four sectors. The Soviets controlled the east of the city while in the west it was the Americans, British, and French who held sway.

Each attempt by the communists to bring the whole of the city into their sphere of influence was thwarted by the resistance of the western allies.

United States President John F. Kennedy called democratic West Berlin an “island of freedom in a communist sea.” But he, too, had to accept the reality of the Wall’s existence, just as the city’s 3 million inhabitants on either side of the “anti-fascist protection rampart” — as the 155-kilometer (96-mile) barrier was officially dubbed in the GDR. 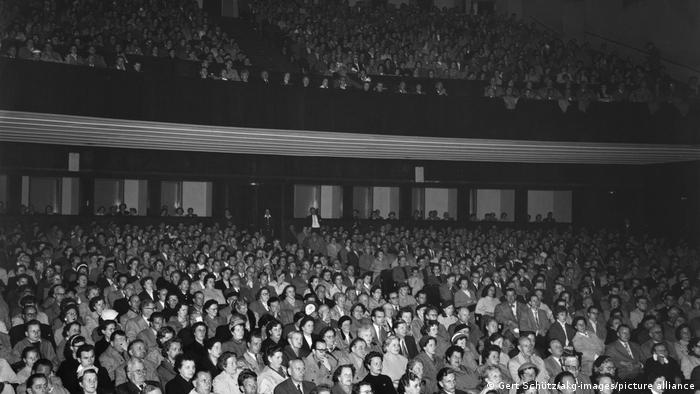 Cinemas along the Iron Curtain

In the 1950s, numerous “border cinemas” opened along the West Berlin sector border. The Corso, also known as Lichtburg, was one of the largest. The concept was the brainchild of Oscar Martay, the film officer of the American High Commission for Occupied Germany. The aim was to publicize the values of the West and the “free world” in the East. 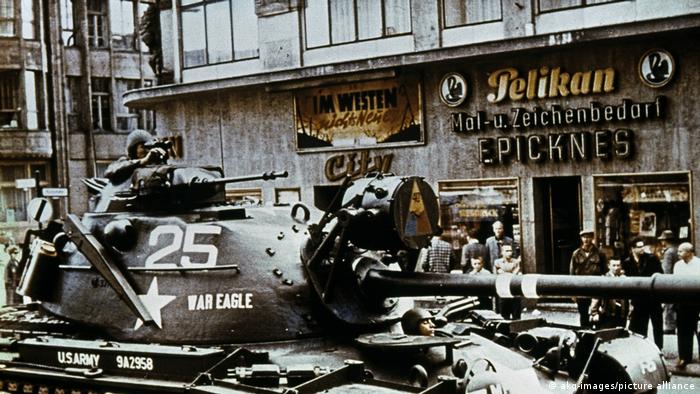 The City border cinema (in the background) at Checkpoint Charlie was also very popular. The cinemas offered discounted movie tickets to residents of the Soviet sector. While the official exchange rate between the East and West German Marks back then was 1:4, it was lowered for visiting cinema buffs from the East to the rate of 1:1.

The end of an era

Most border cinemas were located on the most important road links between East and West Berlin. They were allowed to open from the wee hours of the morning and screen programs throughout the day. The construction of the Berlin Wall signaled the end of the era of border cinemas. They were either closed down or converted to something else.

In East Berlin, Clärchens Ballhaus ⁠— named after original co-owner Clara Bühler ⁠— was a popular dance hall and meeting space for East and West Germans alike. Founded around 1900, it remained privately owned throughout the GDR era. The legendary Berlin pub has survived two World Wars and the division of Germany. It remains a popular attraction in Berlin. 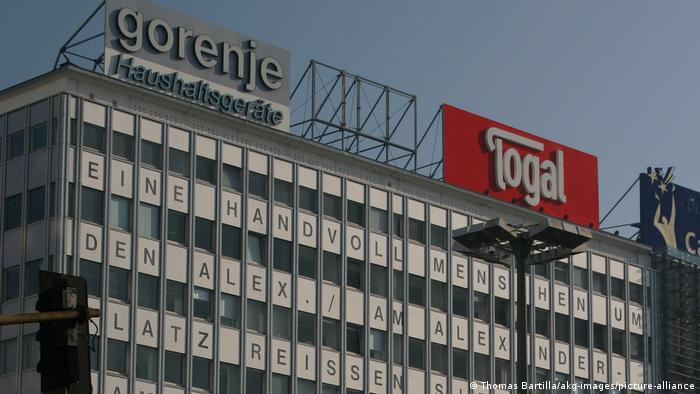 Such personal testimony and those authentic locations like Bernauer Strasse are powerful — above all for young people grappling to understand the history of the Berlin Wall.

For his part, Lennart Siebels grew up on the outskirts of Berlin, but with history on his doorstep. He was born in 1995, very close to what has become known as the Berlin Wall Trail, which traces the path of the former Wall.

“Living so near to the woods that the trail passes through, with that sand track running along there, it’s only natural that even at a very young age you start asking: What’s it doing there?”

“I think I got interested in it all much earlier than would have been the case living in the city.”

For Lena Quincke, it was a very different story. The 22-year-old has a German father, but was born in Cameroon and grew up in Ethiopia. She came to the eastern city of Halle, where she’s currently studying law, in 2017.

Her early school days in Africa had been at a German-language school where German history, including the Berlin Wall, was prominent on the curriculum. But Lena was surprised to note: There were no comparisons with walls and other similar barriers in other countries; It was all about Germany, and Germany alone.

“Everything that happened before and after World War I, World War II — then the Wall, the Cold War.”

Since Quincke came to live in Germany, she realized that the situation is much more complex. “You look at what remains of the Wall, and you begin to understand that here was this wall, and it wasn’t easy for people to get across.” Suddenly, Quincke faced all sorts of new questions about Germany as a divided country.

They may have very different backgrounds, but Lena Quincke and Lennart Siebels have both put a lot of energy into trying to understand what the Berlin Wall really stands for — at school, at home in their families, and above all at actual locations of German history.

Each of them says that when they hear the word “wall” they do not necessarily think of the wall that divided Berlin from 1961 to 1989. No, says Lennart: The Berlin Wall is not always the first barrier that comes to mind. He also thinks for instance about former United States President Donald Trump’s border wall between the US and Mexico. And he points out, the Berlin Wall “is not something that I’ve experienced in my own lifetime.”

Lena sees parallels between old and new walls. The danger, she says, is often the same: People will always find a way of getting through holes in a wall or going around them.

“For many though, the story has a bloody and dangerous end,” she adds.

Take the border between Israeli and the Palestinian Territories, says Quincke — especially in Jerusalem. There is no overlooking the huge impact it has, particularly on the civilian population.

For Quincke, it doesn’t really matter which border or where in the world it might be, they all seem to catch her attention: “I have to admit that for me, the word ‘wall’ is always a red flag.”

Let’s face it, Sleepy Joe is going to run again