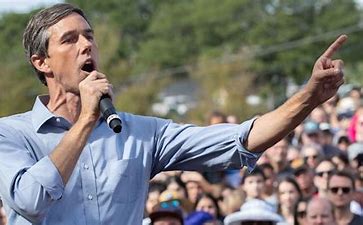 A fun leftover from Tuesday, which we can call Evolution of the Politically Desperate. Before we get to the end of the story, let’s recall the beginning of it. Three years ago, Robert Francis “Beto” O’Rourke made it clear that he was coming for our guns:

This was no exaggeration either. Beto was really going to force Americans to surrender their firearms, and expected everyone to simply comply. Surrender would be “mandatory,” Beto told Morning Joe, even if the owner wasn’t so willing to surrender:

In that October 2019 modified limited hangout on Morning Joe, Beto tried dodging his pledge to confiscate millions of existing firearms. PolitiFact called shenanigans on O’Rourke at that time:

“To be clear, I’m not talking about confiscating anybody’s guns. But I do think that, for those weapons of war — AR-15s, AK-47s — these were designed and sold to the militaries of the world to kill people on a battlefield and there are more than 16 million of them in America. And we’ve seen the devastating effect that they can have in Dayton, Ohio, or El Paso, Texas, or Odessa, not too far from where I live. Those must be bought back or else each of them are an instrument potentially of terror in this country.”

In reality, O’Rourke’s answer isn’t clear at all. … O’Rourke has said “yes” and “hell, yes” when asked about confiscating assault-style weapons. And his mandatory buyback proposes taking those weapons from people, even if it involves a purchase.

We rate O’Rourke’s claim that he is “not talking about confiscating anybody’s guns” as False.

That brings us to this week, as Beto tries another political reinvention in his quest to win Texas’ upcoming gubernatorial election. Beto has tried talking about incumbent Greg Abbott’s record on energy and the pandemic, but local reporters wanted to talk about Beto’s days as a full-blown gun grabber. He’s evolved, Beto insists, into a Second Amendment defender. No, really!

Speaking to reporters, O’Rourke also took a question about his controversial stance on guns and remarks made in 2019 about taking away AR-15s and AK-47s.

“I’m not interested in taking anything from anyone. What I want to make sure that we do is defend the Second Amendment,” he said. “I want to make sure that we protect our fellow Texans far better than we’re doing right now. And that we listen to law enforcement, which Greg Abbott refused to do. He turned his back on them when he signed that permitless carry bill that endangers the lives of law enforcement in a state that’s seen more cops and sheriff’s deputies gunned down than in any other.”

KITV quotes an admirer who manages to prove the old adage about the birth rate of suckers correct, and perhaps even optimistic:

As for the supporters who came out to hear O’Rourke speak, many say they’re ready for new leadership in Texas.

You mean the Democrat who failed a fact check from PolitiFact, and went from gun confiscation to defending the Second Amendment? If that’s candor, I have a bridge to sell you.

Cam Edwards and I discussed this during our VIP Gold chat, and he’s a little less impressed with Beto’s “candor”:

What makes you think anyone would trust you to defend the Second Amendment when you’ve never offered a pro-gun bill in Congress or spoken out in opposition to any gun control measure?

How stupid do you think the voters in Texas are?

Presumably Cam means that in the aggregate, rather than individually. [See above.]

After all, it wasn’t like O’Rourke reversed course on his support for gun confiscation after he dropped out of the Democratic presidential primaries in 2020. As recently as November of 2021 Robert Francis “Beto” O’Rourke was still defending his call to disarm. In fact, he stood by his 2019 comments when he announced his campaign to become the next governor of the Lone Star State.

In an interview with The Texas Tribune to announce his run, O’Rourke said he won’t be backing down from his message on guns. He also said many Texans who support gun rights, regardless of party, agree that most people shouldn’t have access to assault rifles.

“Most of us understand the responsibility that comes with owning a firearm, and we will vigorously protect that Second Amendment right and also protect the lives of those around us,” he said. “But I think most of us also understand that we should not have military-style weapons used against our fellow Texans. We have four of the worst mass shootings in U.S. history right here in Texas that took place over the last five years.”

So, on November 15th of last year O’Rourke said he wouldn’t be backing down from his call for gun confiscation. Less than four months later, he says he doesn’t want to take anything from anyone.

Call it a lie, call it a flip-flop, but however you label it, it’s plain to see that O’Rourke isn’t being honest with Texas voters.

Cam concludes that Beto and his handlers really do think that Texans are “dumber than an armadillo on edibles,” or just desperate. It’s probably both, and neither will help Beto make any inroads in Texas. Morrissey’s First Law of Dating and Politics applies here: Desperation is not an aphrodisiac, especially in the gallon-size containers that Beto is consuming.