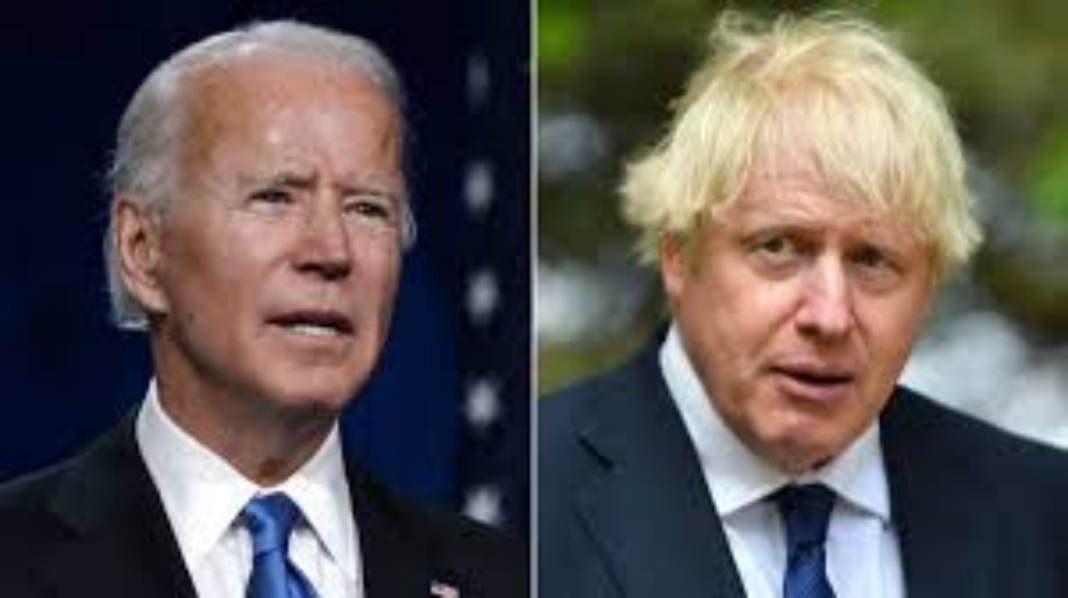 Beginning a week of diplomacy across the Atlantic, Biden hopes to use his first overseas trip as president to reassure European allies that the United States had shed the transactional tendencies of Donald Trump’s term and is a reliable partner again. Long a believer in alliances, Biden stressed the deep bonds with the United Kingdom as a lynchpin of his call for Western democracies to compete against rising authoritarian states.

Though thorny issues like Brexit and the future of Northern Ireland shadowed the meeting, Biden and Johnson began their sit-down by immediately striking a tone of conviviality as the news media watched.

“I told the prime minister we have something in common. We both married way above our station,” Biden joked after a highly choreographed walk with their spouses.

Johnson laughed and said he was “not going to dissent from that one.” But then he seemed to hint that he would be looking to only improve relations with his American counterpart.

“I’m not going to disagree with you on that,” said Johnson, “or indeed on anything else.”

But there are areas of friction. The president staunchly opposed Brexit, Britain’s exit from the European Union that Johnson championed, and has expressed great concern over the future of Northern Ireland. Biden once called Johnson a “physical and emotional clone” of Trump.

The British government has worked hard to overcome that impression, stressing Johnson’s common ground with Biden on climate change, support for international institutions and other issues. But Johnson, host for the Group of Seven summit opening Friday, has been frustrated by the lack of a new trade deal with the United States.

Johnson on Thursday, however, described the new U.S. administration as “a breath of fresh air.”

Speaking after his first face-to-face meeting with Biden, Johnson said “it was a long, long huge session. We covered a good range of topics.” He added that protecting the Northern Ireland peace agreement was “absolutely common ground” among Britain, the U.S. and the EU.

Before their formal discussions, the two men looked back on illustrious wartime predecessors, inspecting documents related to the Atlantic Charter. The declaration signed by British Prime Minister Winston Churchill and President Franklin D. Roosevelt in August 1941 set out common goals for the post-World War II world, including freer trade, disarmament and the right to self-determination of all people.

Reaffirming their nations’ longstanding ties, the two men authorized an updated version of the charter, one that looks to the challenge posed by countries like China and Russia with its promises to promote free trade, human rights and a rules-based international order, and to counter “those who seek to undermine our alliances and institutions.”

The new charter also took aim at “interference through disinformation” in elections and murky economic practices, charges that the West has levelled at Beijing and Moscow. The leaders also promised to build stronger global defenses against health threats on the eve of a summit where discussion of the coronavirus pandemic is expected to take center stage.

The leaders had planned to visit the spectacular island of St. Michael’s Mount but the trip was scrapped because of bad weather. Instead, they met above the beach at the G-7 site in Carbis Bay, staring out at the ocean while trading pleasantries.

Both couples — Johnson is newly married — held hands as they walked. First lady Jill Biden’s black jacket had “LOVE” embroidered on the upper back — a fashion move that recalled her predecessor Melania Trump’s decision to wear a jacket with “I Really Don’t Care, Do U?” written on the back during a 2018 trip to a Texas border town.

The leaders also announced a new U.S.-U.K. task force to work on resuming travel between their countries. Most such travel has been banned since March 2020.

Both sides have stressed publicly that the meeting would be about strengthening ties between longtime allies in a week in which Biden will look to rally the West to rebuff Russian meddling and publicly demonstrate it can compete economically with China.

Biden, who is fiercely proud of his Irish roots, has warned that nothing should undermine Northern Ireland’s 1998 Good Friday peace accord. Some on the British side have viewed Biden warily because of his heritage. White House officials have said the United States does not plan to be involved in the negotiations.

After Brexit, a new arrangement was needed for the border between Northern Ireland, which is part of the United Kingdom, and Ireland, because the European Union requires certain goods to be inspected and others not to be admitted at all. Ahead of a June 30 deadline, ongoing negotiations over goods — including sausages — have been contentious and have attracted the attention of the White House.

One-on-one talks between Biden and Johnson lasted about 10 minutes before advisers joined for a larger meeting that lasted about an hour, said White House press secretary Jen Psaki. The leaders also discussed climate change, the pandemic, creating an infrastructure financing program for developing countries and Afghanistan, and launch a bilateral commission to research and defeat cancer.

But Trump’s presence was still felt on Thursday. Johnson and Trump, for a time, appeared to be kindred spirits, both riding a wave of populism that in 2016 delivered Brexit and upended the American political landscape.

Biden, for his part, has expressed a mistrust of Johnson, who once unspooled a Trump-like insult of President Barack Obama, saying that Biden’s former boss was “half-Kenyan” and had an ancestral dislike of Britain.

Since World War II, the trans-Atlantic “special relationship” has been sustained by a common language, shared interests, military cooperation and cultural affection.

Brexit has tested those bonds. But Biden has made clear that he intends to rebuild bridges with the EU, a frequent target of Trump’s ire. That suggests Berlin, Brussels and Paris, rather than London, will be uppermost in his thoughts.

Britain hoped to secure a quick trade agreement with the U.S. after its official departure from the EU in January. The change in administration in Washington leaves prospects of a deal uncertain.

And there may be one more, though admittedly small, obstacle to nurturing the “special relationship” — the very phrase itself.

Johnson has said he did not appreciate “special relationship,” used by the U.S. president, because to the prime minister it seemed needy and weak. Johnson’s spokesperson said this week: “The prime minister is on the record previously saying he prefers not to use the phrase, but that in no way detracts from the importance with which we regard our relationship with the U.S., our closest ally.”

2020 census: The U.S. White Population Did not Shrink,here is why!!