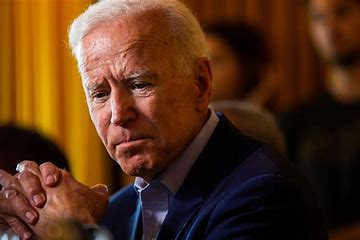 Joe Biden went to Greensboro, North Carolina on Thursday to defend his handling of the economy and talk about supply chain issues. Sticking with his frequent talking point, he blamed Vladimir Putin for the economic crisis in America. At the end of his speech, he turned and extended his hand as though someone was behind him yet no one was there. His hand was extended into the air. As he began to exit the stage, he looked around in confusion and then wandered aimlessly before finally going down the stairs on the side of the stage.

The latest Quinnipiac poll shows Biden’s approval rating at 33%. He has to blame someone for his inability to do his job competently, right? Putin is an easy scapegoat since he invaded Ukraine. He claimed that 70 percent of U.S. inflation could be blamed on Putin. Biden can point a finger at Putin all he wants, whether it is over rising gas prices or inflation, but the truth is that rising inflation was already evident before Putin invaded Ukraine. And, if Joe Biden was an honest man, he would admit that his bone-headed policy decisions on energy, especially oil and gas production, are directly responsible for our current woes at the gas pump. Don’t hold your breath.

The appearance of Biden’s cognitive deterioration is not breaking news. We have seen it time and time again. Biden was speaking to an audience at North Carolina Agricultural and Technical State University. The reason for the trip was to apply pressure on Congress to approve the Bipartisan Innovation Act. The bill aims to increase funding for domestic production of semiconductors. Behind Biden were a couple of rows of students. The look of confusion on the president’s must have been a surprise. It was to Senator Ted Cruz, who used an emoji in response which I think speaks for us all.

Here’s a question – where is his staff? Who are supposed to be Biden’s handlers on the road and why do they keep allowing this to happen? The man who is supposed to be the leader of the free world doesn’t seem capable of exiting a stage on his own. This isn’t ok. Sometimes Jill Biden is near to reach out and guide him but when she isn’t, someone should be. The optics of Jill taking Joe’s arm and helping him move about is bad enough but for him to be left on his own to wander around is worse. The president’s mental health is failing and the whole world can see it. Biden is 79 years old. He won’t get better, only worse.

Biden was named Benjamin Franklin Presidential Practice Professor in 2017. Clearly the designation was made up for him because Biden was the first. He did not teach regular classes. He did, however, make a total of about a dozen appearances on campus over the course of three years, usually for big-ticket events. The Philadelphia Inquirer reported on Biden’s sweet deal in 2019. He collected a pay check in 2017, 2018 and early 2019 from the university to the tune of nearly $1 million. The newspaper reported that Biden’s role was “vague” and he didn’t teach regular classes. Nice work if you can get it.

Biden’s latest resume fluffing and confused state were the latest in a growing list of cringeworthy behavior.

The concerning display from the president – who has come under fire for repeated lapses that have seen him confuse Libya and Syria and mistakenly call Vice President Kamala Harris ‘president’ – comes just nine days after he looked lost during Obama’s return to the White House as reporters flocked to the former president, leaving Biden alone to wander aimlessly.

During the event, which saw Obama deliver a speech to thunderous applause, the former president was seen shaking hands with fans and fellow politicians in the East room, while Biden wandered around looking confused.

In another clip, Biden was seen standing behind Obama and Vice President Kamala Harris as they shook hands with people, while he watched on – with no one seemingly paying the president any mind.

In past references to his days as a professor, even his spokesperson at the time, Kate Bedingfield, admitted, “He will not be teaching classes.”

In Feb. 2020, Biden said he “became a teacher, became a professor” instead of “taking a Wall Street job.”

And during a live-streamed address to the Munich Security Conference in Feb. 2021, Biden said, “Two years ago, as you pointed out, when I last spoke in Munich, I was a private citizen. I was a professor, not an elected official.”

The UPenn gig was an honorary position that allowed Biden to enrich himself and show up every now and then, usually for his own benefit, like for the event where he hawked his book. Biden barely graduated from law school and his undergrad days didn’t set the world on fire. Why would anyone think the man is an academic?

According to a compilation of Biden appearances by the Daily Pennsylvanian, Biden visited campus at least nine times. One of the visits was a November 2017 event promoting his book “Promise Me, Dad.”

In his brief period of not holding public office, Biden reaped a windfall speaking at colleges, according to financial disclosures. He took $190,000 to speak at Drew University in New Jersey, $182,000 from Lake Michigan College and $180,000 to appear at Vanderbilt University.

Does no one in his inner circle bother to mention to Biden that maybe he shouldn’t make such boasts during public appearances? It is true Biden was on lots of college campuses in his career. Once out of office, he made a pretty penny off speaking engagements on college campuses.

Biden is reported to have been an adjunct professor of law at Widener University in Pennsylvania for 17 years during his decades in the Senate. Perhaps he was confusing that time with his time as an honorary professor. It’s just as well that after the trip to North Carolina was finished, Biden flew to Camp David for a long weekend. He obviously needs some rest.