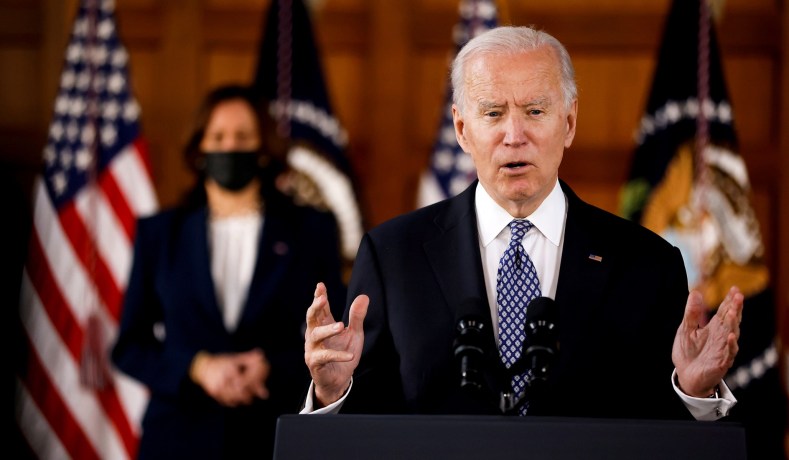 I wrote today about the dishonest attacks on the Georgia election law, and a Biden claim that has, appropriately, gotten four Pinocchio’s from the Washington Post.

If you delve even a little into this law, it is beyond belief how distorted it’s getting. Here’s a good rundown, from which I’ll pull some notable items.

Hours for early voting will be extended in many places:

One of the biggest changes in the bill would expand early voting access for most counties, adding an additional mandatory Saturday and formally codifying Sunday voting hours as optional. Counties can have early voting open as long as 7 a.m. to 7 p.m., or 9 a.m. to 5 p.m. at minimum. If you live in a larger metropolitan county, you might not notice a change. For most other counties, you will have an extra weekend day, and your weekday early voting hours will likely be longer.

The deadline for requesting an absentee ballot is moved up to avoid completed ballots not getting delivered on time:

Instead of returning an application by the Friday before election day, SB 202 now backs it up to two Fridays before. Republican sponsors of the bill and local elections officials say this will cut down on the number of ballots rejected for coming in late because of the tight turnaround.

Absentee ballots will be more secure:

The actual absentee ballot and envelopes will look different, as well. SB 202 requires absentee ballots to be printed on special security paper, and your precinct name will now be included along with precinct ID printed at the top. Once you fill out your choices by filling in the circles for your choices, you will place it in an envelope that will have your name, signature, driver’s license or state ID number (or last four digits of your Social Security number) and date of birth. The envelope will be designed so that sensitive personal information will be hidden once it is sealed.

Drop boxes, which didn’t exist in Georgia prior to 2020, will be preserved, although on a more limited basis:

Secure absentee ballot drop boxes — which did not exist a year ago — are now officially part of state law, but not without some new changes. The law now requires all 159 counties to have at least one drop box, caps the number of boxes at one per 100,000 active voters or one for every early voting site (whichever is smaller) and moves them inside early voting sites instead of outside on government property. Additionally, the drop boxes will only be accessible during early voting days and hours instead of 24/7.

Absentee ballots will be tabulated faster, and the overall count will be more transparent:

A change local officials embrace is a section that allows them to begin processing, but not tabulating, absentee ballots starting two weeks before the election. There’s extra incentive to do so, by way of a new requirement that counties count all of the ballots nonstop as soon as polls close and finish by 5 p.m. the next day or potentially face investigation.

Plus, local officials are required to post and report the total number of ballots cast on election day, during early voting, via absentee voting and provisional ballots, all by 10:00 p.m. on election night, essentially providing the public with a denominator to understand the total possible votes out there as results trickle in.

The law attempts to address long lines, a particular problem in Democratic counties:

Another change that was proposed last year and is now law would require large polling places with long lines to take action if wait times surpass an hour at certain times during the day. Those massive polls with more than 2,000 voters and wait times longer than an hour would have to hire more staff, add more workers or split up the precinct after that election. More than 1,500 of Georgia’s precincts have over 2,000 voters.

If you follow most of the media, or cable TV chatter, or Democratic politicians on Twitter, you likely know none of the above.

Being a felon doesn’t disqualify you from the presidency

Facebook asked by the Democrats to Censor Pro-Life ‘Misinformation’