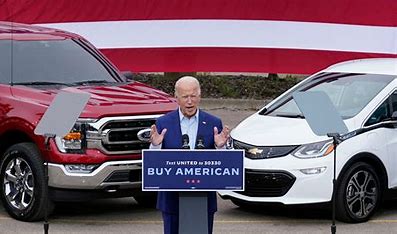 Back in the days of Barack Obama, he handed out billions of dollars to solar and wind power projects.

The Chicago Tribune noted that just one of them, the “Solyndra scandal,” cost taxpayers at least half a billion dollars.

That solar panel company got $535 million from the government, “with the help of the Obama White House,” over objections from federal budget experts.

“Obama and Vice President Joe Biden got a nice photo op. They got to make speeches about being ‘green.’ But then Solyndra went bankrupt. Americans lost jobs. Taxpayers got stuck with the bill.”

Now, it seems Biden is pulling that page from his history for a potential do-over.

Just the News reports a total of $530 million was dispatched by the Biden administration to Ascend Elements and 6K Inc. to support “battery manufacturing, recycling, and material processing for the electric vehicle market.”

The report warned the Biden administration has plans to send a total of $2.8 billion to 20 companies.

“U.S. Democratic Sens. Edward J. Markey and Elizabeth Warren and U.S. Reps. Jim McGovern and Seth Moulton hailed the move that will support the companies based in North Andover and Westborough,” the report explained.

The delegation believes the move will support the electric vehicle industry and also “good-paying jobs,” the report said.

In a statement, Biden’s energy secretary, Jennifer Granholm, said, “This is truly a remarkable time for manufacturing in America, as President Biden’s agenda and historic investments supercharge the private sector to ensure our clean energy future is American-made. Producing advanced batteries and components here at home will accelerate the transition away from fossil fuels to meet the strong demand for electric vehicles, creating more good-paying jobs across the country.”

Ascend is getting $480 million to built a plant to recycle batteries and 6K is getting $50 million for a “demonstration project.”

One problem that remains apparently unaddressed is the fact that the American electrical grid cannot now support the electricity that would be required for a mostly-electric car society.