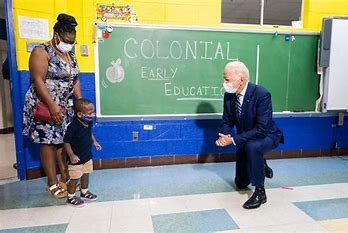 Savor this moment because it’s as close as we’ll ever get to an official announcement that the pandemic’s over. The White House learned its lesson about COVID hubris the hard way last summer when Biden insisted on turning July 4th into an “independence from the virus” celebration — just as Delta was beginning to explode across the country.

They won’t repeat that mistake. COVID isn’t over, the president said today, explicitly. But as you’re about to see, his broader point was that the state of emergency around COVID is over.

Which means the pandemic’s over. Endemic COVID is here at last.

President Biden: “We’re now in a new moment in this pandemic. It does not mean that COVID-19 is over. It means that COVID-19 no longer controls our lives.” pic.twitter.com/os2SJBSd4q

A big shift in the new Monmouth poll, with public support for masking/social distancing requirements well below July ’21 levels (when cases/deaths/hospitalizations were similarly low)https://t.co/D1d0T3DO2n pic.twitter.com/9vPXpfuno2

Today’s total of 17,000+ represents an almost 90 percent decline from the worst of the Omicron wave this past winter while daily deaths stand at their lowest level since last August. If in fact the pandemic stage of SARS-CoV-2 has ended, it will have happened with America just shy of a million people dead — 978,842 at last check, per Johns Hopkins. We’ll reach seven figures sometime in the next month or two.

Biden called today’s presser for two reasons, one of which was to announce the relaunch of COVID.gov. The site has been redone to bring it in line with the CDC’s new guidance tying masking and social distancing to community levels of transmission instead of national ones. Enter the name of your county and it’ll give you the relevant recommendations for your community; there are also links on where to find vaccines, tests, and masks.

The other purpose of the presser was … this:

Biden gets his second booster shot: “It didn’t hurt a bit.” pic.twitter.com/bECRCuKAu9

Why is the president getting a fourth dose if the pandemic is over? Answer: Because the president is “old AF,” as the kids like to say, and a fourth dose makes a difference to the olds. A new study from Israel of more than half a million people found senior citizens with two boosters have a 78 percent lower mortality rate than those with only one. The CDC went further yesterday and approved a second booster — optionally — for all adults aged 50 and over four months after their first booster, a reflection of jitters among public health experts over the wave of BA.2 that’s blitzed Europe over the past month. Thanks to that subvariant, cases in the UK more than doubled in the past month and have reached their highest levels of the entire pandemic in Germany. We could be next.

Which, again, is why Biden was careful today to imply that the pandemic is over in the U.S. without explicitly saying so.

Having the president get his second booster on camera is the most efficient way to call the public’s attention to the fact that those boosters are now available. The “optional” nature of the fourth shot has some experts worried that vulnerable seniors may choose to skip it or won’t realize they’re eligible unless it’s recommended to them with greater urgency. But there’s also a personal reason for Biden to get the shot: Precisely because he’s “old AF” and many Americans are now dropping precautions, including around him, he’s at greater risk of contracting COVID than he has been since the virus took root here in March 2020. And a man of his age isn’t guaranteed to win a bout with COVID, even if he’s vaxxed to the gills:

Over the last two weeks, the coronavirus has crept ever closer to Biden, disrupting White House operations just as the country and the administration have been relaxing strict safeguards against covid-19. The cluster of cases highlights the continued threat posed by the virus, complicating White House efforts to signal that the country has turned the corner on the pandemic…

The 79-year-old Biden’s vaccination status could help the president avoid serious infection, he said. “But even that is in doubt, given his age and obvious frailty,” [Lawrence] Gostin added. “I would be far more worried about the president’s health than it appears from recent White House protocols.”…

Biden does at times persist in wearing a mask behind closed doors, according to one White House aide who spoke on the condition of anonymity to reveal presidential habits. During Biden’s meetings, aides still stand far away from him, and anyone meeting with any of the four principals are tested for the virus ahead of time, according to a different White House official who was not authorized to speak publicly.

That second booster he received today might be all that’s standing between us and President Kamala Harris. When you look at it that way, I’d give him a third just to be on the safe side.

Anyway, if there’s a retiree in your life who’s not all-in on some magical cure like ivermectin, now’s the time to point them to the good stuff before BA.2 breaks big in the U.S. As Hong Kong recently discovered to its dismay, Omicron is a beast to those without immunity.

The US spied on top politicians in Europe, including German Chancellor...