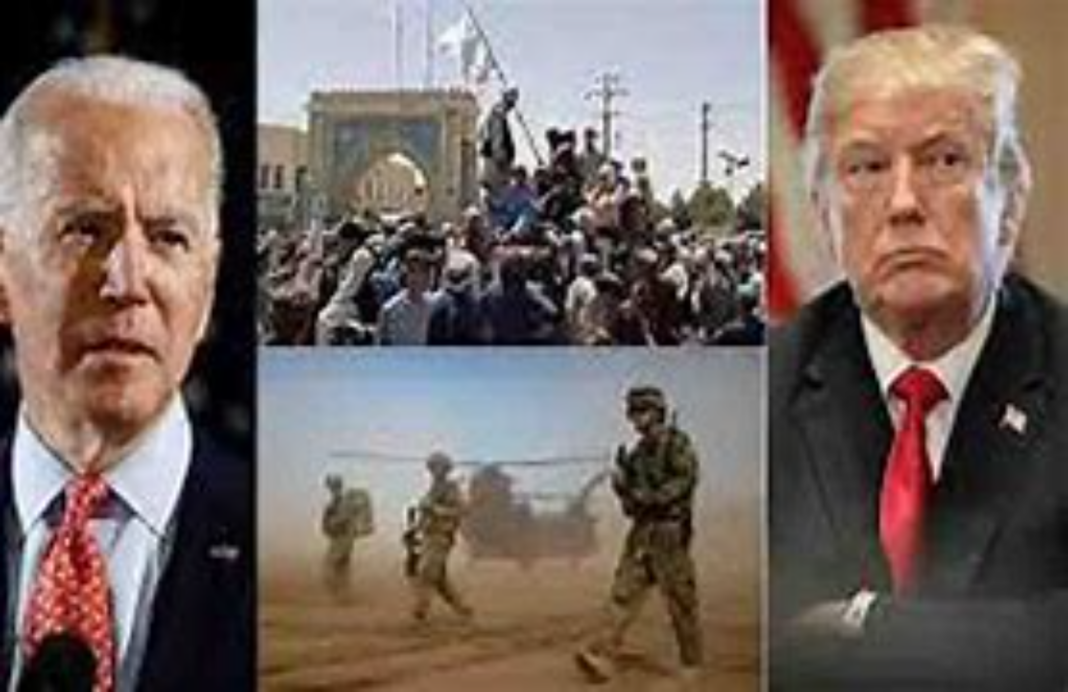 Charlotte, NC — President Joe Biden spoke July 8 concerning his decision to withdraw all remaining U.S. forces from Afghanistan. Following solid assurances that “the drawdown is proceeding in a secure and orderly way” and that “U.S. support for the people of Afghanistan will endure,” he answered some questions.

From the White House transcript.

Q: Is a Taliban takeover of Afghanistan now inevitable?

The president: No, it is not.

The president: Because you — the Afghan troops have 300,000 well-equipped — as well equipped as any army in the world — and an air force against something like 75,000 Taliban. It is not inevitable. …

Q: Do you see any parallels between this withdrawal and what happened in Vietnam, with some people feeling ——

The president: None whatsoever. Zero … The Taliban is not the South — the North Vietnamese Army. They’re not — they’re not remotely comparable in terms of capability. There’s going to be no circumstance where you see people being lifted off the roof of an embassy. …

Q: Mr. President, how serious was the corruption among the Afghanistan government to this mission failing there?

The president: Well, first of all, the mission hasn’t failed, yet. There is in Afghanistan — in all parties, there’s been corruption. The question is, can there be an agreement on unity of purpose? … That — the jury is still out. But the likelihood there’s going to be the Taliban overrunning everything and owning the whole country is highly unlikely.

Between gas prices heading for orbit, insulin prices following closely behind, and our oil supply changing from independent to back to some other countries’ mercy, we should to classify this as the Biden’s administration’s first-and possible last-great fiasco as we witness the sweeping Taliban blitzkrieg that saw them enter Kabul Sunday. The resistance was as effective as a sheet of wet toilet paper trying to stop a falling bowling ball.

To be fair, this is kind a part of the withdrawal agreement negotiated last year by the Trump administration, although it doesn’t appear that this abrupt yanking of support was part of the deal. Mike Pompeo, secretary of state didn’t seem to add anything helpful.

Against the advice of his senior military advisers, this is on Biden’s watch, at Biden’s insistence, and with Biden’s firm assurance to the American people that this was the best course of action.

Presidents had a senior adviser resign in the wake of such a debacle, as Les Aspin, then the secretary of defense, did after the 1993 Black Hawk Down episode in Somalia. This isn’t our first stupid decision.

So here are some light questions that just happened to occur to me on the way to work.

Why would anyone believe that killing will stop?

And I am NOT going to link to any of the beheading videos-and these sadistic lunatics were just gleefully handed power by our own government.

One Taliban official declared that the Holy War was directed not against ordinary Afghans but only “against the occupiers and those who defend the occupiers.” That list is going to reach into the thousands.

So, all of the Biden supporters have just allowed women to become chattel-again. Roughly 18 million women/girls in Afghanistan will now be subject to laws from the seventh century. No more walking about with uncovered faces or be seen in public without a male relative. No more jobs they’ve fought so hard to get over the last 20 years: journalists, teachers, parliamentarians, entrepreneurs, kiss those career fields goodbye. Daughters will not be allowed to play sports or go to school or consent to the choice of a husband. The number of pro-Biden articles I have read from people that support this is stunning.

The ever popular “Beheading-torture” assembly-line execution machine will most certainly start back up again for anyone that is gay, trains, bi, or gender neutral. I have received personal attacks concerning this very subject repeatedly for years; yet these cretins just put the murder machine back on standby.

Afghanistan will become an “all-you-can-eat” buffet to every penny-ante psychopath suicide bomber on this rock. Taliban deputy leader Sirajuddin Haqqani is one of the F.B.I.’s most wanted terrorists, and he is now back in the saddle. I am not expecting a career change, even if he claimed otherwise last year in the Times.

“The relationship between the Taliban and al-Qaida will get stronger,” Saad Mohseni, the head of Moby, the Afghan news and media company, said Saturday. “Why should the Taliban fear the Americans anymore? What’s the worst that could happen? Another invasion?

“These guys are going to be the most belligerent, arrogant Islamist movement on the planet,” Mohseni added. “They are going to be the Mecca for any young radical of Islamic heritage or convert. It’s going to inspire people. It’s a godsend for any radical, violent group.”

We now have open borders, restrictions on Americans travel and purchasing, mask mandates that keep our faces covered, and we just allowed to Taliban to release over 5000 like-minded lunatics from the Afghan prison-who will probably all be bearing a grudge. The country most immediately at risk from an ascendant Taliban is neighboring Pakistan-a nuclear country. After years of Islamabad giving sanctuary and support for the Afghan Taliban (as long as they attacked coalition forces), Pakistan must now fear that the next regime in Kabul will give sanctuary and support for the Pakistani Taliban. The prospect of fundamentalist forces destabilizing a regime with an estimated 160 nuclear warheads-WHICH COULD END UP IN THE TALIBANS’ HANDS IF THEY TAKE OVER- is an unparalleled global nightmare. And these idiots missed it.

Short of this, the calamity in Afghanistan is a recipe for another overpowering wave of migrants, one that will take over Europe’s shores-followed by the inevitable backlash.

America’s geopolitical position has been gravely-possibly fatally-damaged. What kind of ally is the United States? Bay of Pigs might give us a clue to the obvious answer. In the last several years, the United States has maintained small force in Afghanistan, providing surveillance, logistics and air cover for Afghan forces. American president could have maintained this position almost indefinitely — OK, we are not defeating the Taliban but we’re also not letting them get our of control.

We left bases in Japan, Germany, Italy, Iraq, Kuwait, Korea, and heck Sri Lanka for all I know. Why in the WORLD did we not leave a base-FUNCTIONING-in Afghanistan?

In other words, we had achieved a good-enough solution for a nation we could afford to neither save nor lose-AND WE THREW IT AWAY. Now, in the aftermath of Saigon, v. 2, every enemy will draw the lesson that the United States is a paper tiger, with no spine for defending basic decency that is the basis for a general world order. And our allies — Taiwan, Ukraine, the Baltic states, Israel, Japan — will pick up that it is on its own in the face of its enemies. The Truman Doctrine has been crucified-publicly-by the Biden Doctrine.

But didn’t we have to leave Afghanistan sometime? No, actually. We’ve been in Korea and Cuba for roughly 7 decades, at far higher cost, and the world is better off for it.

But wasn’t the Afghan government corrupt and inept?

Absolutely- but they weren’t massacring its own citizens, screaming about jihad, or crushing their female population back to the level of cattle.

Based on Benghazi, I’d say this isn’t-apparently-a factor. Surely squandering the sacrifice of so many Americans who fought the Taliban for nothing would seem to be a much worse injustice.

But is there any reason we should care more about the fate of Afghans than we do of desperate people elsewhere?

YES-BECAUSE THEY ARE NOT SEPARATE! THE REST OF THE WORLD DOESN’T GET TO TAKE A PASS THIS TIME!

WE JUST POTENTIALLY HANDED NUCLEAR WEAPONS TO THE FREAKING TALIBAN!!!

The consequences of defeat are rarely benign for nations, no matter how powerful they otherwise appear to be. Allowing Iran to take hostages back in 1977 with no real retaliation should have been our first wake up-we started getting attacked by every rat-bag group that had an agenda, from the bombings in Beirut to the attacks on military bases in Lebanon to the first 1981 World Trade Center Bombing to the Stark missile attack.

This is supposed to be an opinion article. But I am afraid it is going to ultimately be a foresighted documentation of the things to come.

America’s enemies, great and small, will draw conclusions from our needless surrender, just as they will about the frighteningly oblivious president and supporters who brought it about.

And-I am so sorry-they are going to act. Decisively.