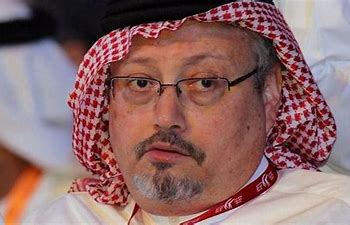 As Ed described earlier today, President Biden is taking some heat for his fist bump with Mohammed Bin Salman. So much for Saudi Arabia being a “pariah state.” But after the fist-bump Bidedn and MBS held a private meeting, meaning there were no cameras in the room. Team Biden, perhaps trying to soothe some of the people upset about the fist bump, is claiming that Biden confronted MBS about the murder of Jamal Khashoggi.

President Biden said Friday night that he brought up the murder of Jamal Khashoggi during his closed-door meeting with Crown Prince Mohammed bin Salman and told the prince that he considered him to blame.

While Mr. Biden said nothing about Mr. Khashoggi during the public part of his meeting with the crown prince, he told reporters afterward that he considered the killing “outrageous” and directly confronted Prince Mohammed, who was judged responsible by the C.I.A. for the assassination carried out in Istanbul by a team of Saudi operatives in 2018…

“He basically said that he was not personally responsible for it,” Mr. Biden said. “I indicated that I thought he was.”

In other words, Biden is claiming that while he may have looked like a pushover in public, behind the scenes he was a tiger for justice…or whatever. But did it really happen that way? MBS’s people say no. This was reported by a PBS reporter who spoke to Adel al-Jubeir, the Saudi minister of state for foreign affairs who was in the room during the private meeting. Here’s how he claimed it went down.

I asked @AdelAljubeir, who was in the meeting with MBS, whether @POTUS‘ characterization of how he accused MBS of being responsible for Khashoggi’s murder was accurate. @AdelAljubeir told me, “I didn’t hear that exchange, that particular exchange…

Here’s how Adel said it went:

So Khashoggi was mentioned in the context of human rights but that Biden sort of blunted any response by saying he knew the Saudi position already. And MBS agreed saying that human rights were really important. That’s very different from the kind of direct confrontation over the murder of Jamal Khashoggi that Biden described.

So is this a case where Biden is telling us what really happened and the Saudi’s are lying to save face? That’s possible but as Peter Baker points out at the NY Times, Joe Biden has a long history of describing pointed confrontations with foreign leaders that may not have happened as he remembers.

Mr. Biden has similarly described an unvarnished confrontation in 1993 with Slobodan Milosevic, the Serbian nationalist leader who unleashed an ethnic war in the Balkans. “I think you’re a damn war criminal and you should be tried as one,” Mr. Biden, then a senator, related having told Mr. Milosevic, according to a 2007 memoir, “Promises to Keep.” Some other people in the room later said they did not recall that line.

Mr. Biden likes presenting himself as standing up to dictators and crooked figures. Another favorite story stemmed from a meeting with President Hamid Karzai of Afghanistan in 2008, when the Afghan leader denied that his government was awash in corruption. Mr. Biden said he grew so irritated that he threw down his napkin, declared, “This dinner is over,” and stormed out.

Often, others in the room for such sessions say that some version of what Mr. Biden has described did take place, only not with quite as much camera-ready theatricality. During his presidential campaign, for instance, he told a moving story about honoring a war hero that fact checkers at The Post later concluded conflated elements of three actual events into a version that did not happen.

That last one made news in August of 2019 when the Post pointed out that Biden got the story wrong. Here’s a video of Biden telling the story.

And the Post’s take:

“This is the God’s truth,” Biden had said as he told the story. “My word as a Biden.”

Except almost every detail in the story appears to be incorrect. Based on interviews with more than a dozen U.S. troops, their commanders and Biden campaign officials, it appears as though the former vice president has jumbled elements of at least three actual events into one story of bravery, compassion and regret that never happened.

Biden visited Konar province in 2008 as a U.S. senator, not as vice president. The service member who performed the celebrated rescue that Biden described was a 20-year-old Army specialist, not a much older Navy captain. And that soldier, Kyle J. White, never had a Silver Star, or any other medal, pinned on him by Biden. At a White House ceremony six years after Biden’s visit, White stood at attention as President Barack Obama placed a Medal of Honor, the nation’s highest award for valor, around his neck.

The upshot: In the space of three minutes, Biden got the time period, the location, the heroic act, the type of medal, the military branch and the rank of the recipient wrong, as well as his own role in the ceremony.

So the bottom line here when it comes to the meeting with MBS is that we have two unreliable narrators telling us different versions of what happened. If I had to guess, I’d say that Biden’s version is a greatly exaggerated version of what was actually said.

Biden: Cognitive Abilities Will Cause U.S. to ‘Pay a Price’