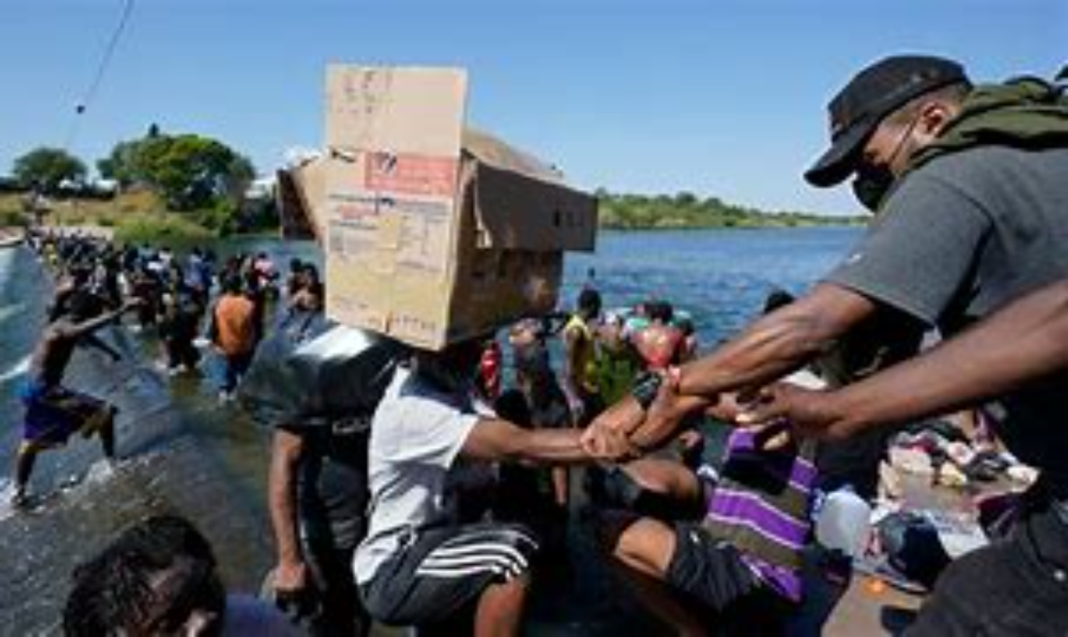 Another temporary win in a crisis that the Biden administration created for itself. Back in September more than 15,000 Haitian migrants came across the border in Del Rio, Texas. Video of border patrol agents on horseback trying to keep them from crossing the river created a minor sideshow but later we learned that the administration had been warned months earlier that a wave of Haitians were coming. However, progressives within the administration didn’t want to deport anyone as a way to send a signal that the border was closed.

The two officials said some argued that deportations — even of small numbers — would deter more people from coming, particularly Haitians living in South America. Others maintained that it would be inhumane to send Haitians back to a country in turmoil after the assassination of its president and, on Aug. 14, a 7.2-magnitude earthquake.

Ultimately, the Biden administration opted not to ramp up deportations, and it then halted all deportation flights to the impoverished island country shortly after the earthquake.

Belatedly, the administration realized this had been a mistake. They were also probably very worried about reports that another 60,000 Haitians were making their way north. Reversing the previous policy, they started sending flights with thousands of Haitians all the way back to Haiti rather than dropping them back across the border where they would quickly just try again to come across.

Today, Nick Miroff at the Washington Post reports that the number of Haitians crossing the border last month was down sharply:

The number of Haitian migrants attempting to cross into the United States fell by more than 90 percent in October after the Biden administration aggressively ramped up its use of deportation flights, according to preliminary U.S. Customs and Border Protection data obtained by The Washington Post.

CBP figures show about 1,000 Haitians were taken into custody along the Mexico border last month, down from 17,638 in September, when huge crowds waded across the Rio Grande to a makeshift camp in Del Rio, Tex., creating a humanitarian and political crisis for the Biden administration…

The mass expulsions were denounced by immigrant advocacy groups and members of the president’s own party, who noted that Haitian families — including thousands of women and children — were being returned at higher rates than migrants from other nations. Many had fled Haiti years earlier and had been living in Chile, Brazil and other South American nations. They opted to leave for the United States after hearing from relatives and others that jobs were available and Haitians would be allowed to enter.

To sum this up, the Haitians who turned up in September had already settled in other countries but decided to migrate north because word got out that President Biden was throwing open the border. And even though the administration knew this was happening they refused to take action until so many Haitians came across at once that it created a lot of news about the border crisis and a political problem for Democrats. Then and only then did they get serious about removing people who a) had already settled elsewhere and b) didn’t have legitimate asylum claims.

Once the migrants coming north realized the situation had changed, they stopped.

Tens of thousands more Haitians who want to cross the border have opted to wait in Mexico for now, or temporarily seek asylum there, fearful they will be returned to their home country if they attempt to enter the United States illegally, according to U.S. authorities and United Nations migration officials.

“The Biden administration has pivoted to a clear, definite position on how it’ll be treating arrival of Haitian migrants,” said Cris Ramon, an immigration policy analyst in Washington. “By leaning heavily on expulsions, it’s making people think twice.”

Most of the Haitian migrants do not have strong asylum claims because they resettled in other countries after Haiti’s devastating 2010 earthquake. In interviews about why they want to come to the United States, they cite deteriorating economic conditions and racial discrimination in South America, as well as the belief the Biden administration would let them stay.

This whole story demonstrates how powerful the pull factor is on migrants. If you signal that the border is open and that you’re going to take a very soft approach to people who are clearly gaming the system, you get tens of thousands of people moving north. If you get tougher and send them all the way back to Haiti then the entire migration stops pretty fast.

Really, the Haitians who’ve been deported back to Haiti are worse off than when this started because the situation in Haiti is worse than the situation in many of the South American countries where they were living before responding to the lure of Biden’s semi-open border. If the president had been more careful all along not to signal that anyone who showed up and made it across could de facto stay for good, those deportation flights wouldn’t have been necessary. Do you think anyone in the administration has learned from this experience or are we doomed to repeat it all again next year?

The US Government paid the mainstream media $1 billion in tax...