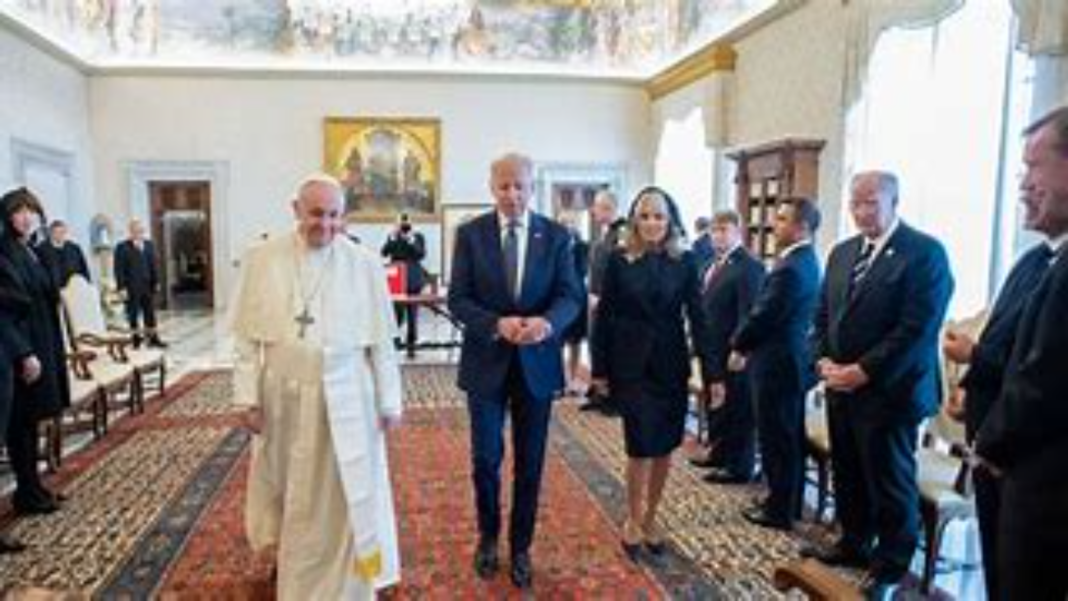 So they did discuss abortion this morning after all — obliquely. Ed noted earlier that the readouts from both sides after their meeting notably failed to mention the subject despite the fact that the U.S. Conference of Catholic Bishops is preparing to huddle on whether pro-choice politicians should receive communion. That made it sound like abortion didn’t come up, leaving the silence between the two men ambiguous. If Francis declined to challenge Biden on the matter, would that mean the Church should tolerate the president’s views on abortion?

Or, as Ed suggested, would it mean that the Pope had refused to reassure Biden that his pro-choice position is acceptable, thus encouraging the USCCB to come down hard on him?

If you believe Biden, abortion wasn’t broached directly but rather indirectly: Francis reassured him that he’s a good Catholic who should continue to participate in the sacrament. Checkmate for the USCCB?

REPORTER: Did the issue of abortion come up at all?

BIDEN: No it didn’t…We just talked about the fact that he was happy I was a good Catholic and I should keep receiving Communion…

REPORTER: Did you discuss the US Conference of Bishops?

I’m unqualified to address the theological dispute here but the politics seem straightforward. The fact that the elephant in the room didn’t come up in a 75-minute conversation smells like strategic ambiguity on both sides. Francis obviously wouldn’t want to flatly declare “you can support abortion and be a Catholic in good standing” but he also wouldn’t want to tell the second Catholic president in American history that he should keep his ass in the pew the next time the host is offered at Mass. Biden wouldn’t want to broach the subject either, knowing there was at least a chance that the Pope would tell him his view on abortion is incompatible with his faith and that he’d have to choose between the two.

The world’s most famous Catholic simply isn’t going to tell the world’s second-most famous Catholic that he’s ineligible for the Church’s holiest sacrament, particularly given the massive political fallout that might result if he did. If Biden can’t take communion because he’s pro-choice, does that mean all pro-choice Catholics should be excluded or just Catholic politicians? If the latter, why should someone who votes for a pro-choice politician be any more welcome to receive the host than that politician is? They’re each facilitating legal abortion. One’s just doing it slightly less directly than the other.

Even so, some leading Catholics held out hope that Francis would reproach Biden in their meeting today:

Dear Pope Francis,
You have boldly stated that abortion is “murder.” Please challenge President Biden on this critical issue. His persistent support of abortion is an embarrassment for the Church and a scandal to the world. Thank you.
Very respectfully,
Your brother +Thomas

Tobin is “often viewed within the Vatican as hostile to Francis’ agenda,” per the Times. So is Cardinal Raymond Burke, possibly Francis’s most prominent counterweight inside the Church in the U.S. Yesterday Burke posted a long letter on his website in anticipation of the Pope’s meeting with Biden reminding his readers that American bishops have considered once before whether pro-choice Catholic politicians are fit to receive the Eucharist.

The context of the June 2004 meeting of the United States Bishops was the campaign of Senator John Kerry for President of the United States. Senator Kerry claimed to be a Catholic, while, at the same time, supporting and promoting abortion on demand in the nation. At the time, I was Archbishop of Saint Louis (appointed on December 2, 2003, and installed on January 26, 2004). As had been my practice as Bishop of La Crosse (appointed on December 10, 1994, and installed on February 22, 1995), I admonished Senator Kerry not to present himself to receive Holy Communion because, after having been duly admonished, he persisted in the objectively grave sin of promoting directly procured abortion. I was not the only Bishop to admonish him thus…

I invite you to pray with me for the Church in the United States of America and in every nation, that, faithful to the mission of Christ, her Bridegroom, she will be faithful, limpid and uncompromising in the application of can. 915, defending the sanctity of the Holy Eucharist, safeguarding the souls of Catholic politicians who would grievously violate the moral law and still present themselves to receive Holy Communion, thereby committing sacrilege, and preventing the most serious scandal caused by the failure to observe the norm of can. 915.

According to the Church’s Catechism, anyone who engages in “formal cooperation” with abortion should be excommunicated. Someone who’s been excommunicated isn’t eligible to take communion. The question for Church authorities is whether voting in favor of pro-abortion policies amounts to “formal cooperation” or whether only participating in an actual abortion suffices. Francis’s view, it seems, is that pro-choice politicians aren’t “formally cooperating.” The USCCB seems to see things differently per a meeting they held several months ago. At that meeting the bishops agreed to draft a statement later this year clarifying whether pro-choice politicians should receive the Eucharist. But to make it binding, two-thirds will need to approve it. Is that likely after the signal the Pope sent today?

As I understand it, ultimate authority on whether a parishioner is eligible to take communion falls to his or her bishop and, of course, to the Pope. The bishop of D.C., Wilton Gregory, says he doesn’t object to Biden being given the host. The Pope evidently doesn’t object either. So what’s left to talk about?

Maybe this: If the USCCB ends up passing a statement condemning pro-choice pols who receive the host despite Francis’s signal of opposition, it’ll be seen as a rebuke of the Pope himself. There’s already tension between the Vatican, which has grown more liberal under Francis, and the conference of American bishops, which has grown more conservative. A soft schism between the two on abortion will make things awkward for American Church members, although maybe not awkward for Biden himself. Now that he’s gotten political cover from the Pope, he has an unimpeachable talking point in his defense if the USCCB reprimands him.