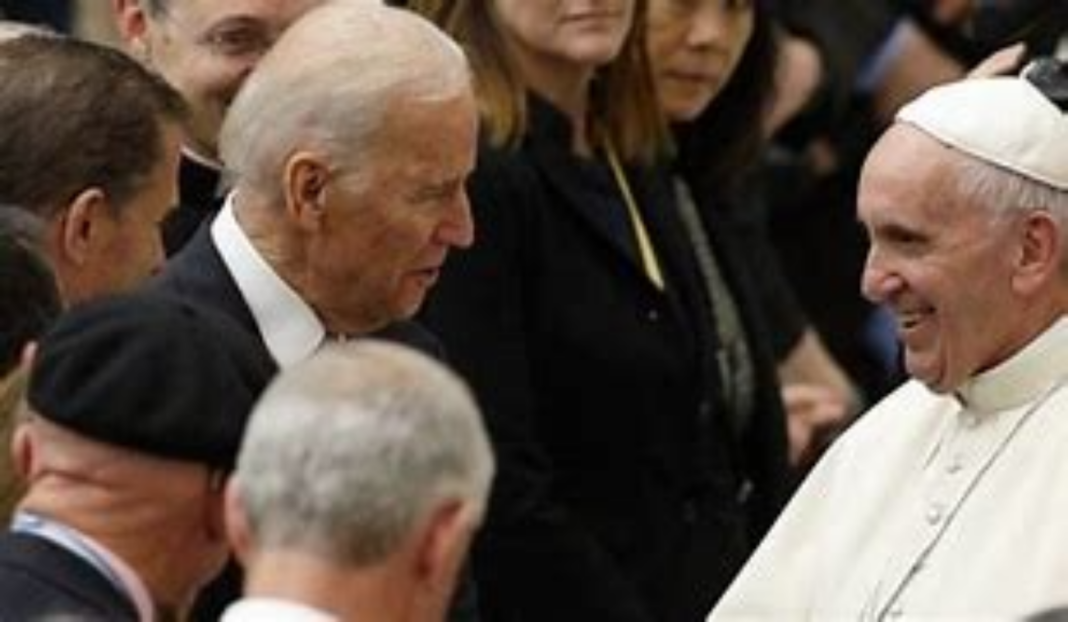 Did the Holy See just stonewall America’s second Catholic president — or did Joe Biden just have very bad timing? Or is this juuuust a little too good/bad to be true? According to this single-sourced story from Catholic News Agency, the White House had asked for a meeting between Biden and Pope Francis for today, including attendance at a Mass celebrated by the pontiff. Both requests were apparently rejected, and the CNA source says it relates to Biden and the questions being considered by US bishops about his access to the Eucharist:

President Joe Biden’s attendance at early morning Mass with Pope Francis was nixed from an early plan for the first meeting of both leaders, a reliable Vatican source told CNA.

President Biden is currently in Europe for several high level meetings, offering a potential opportunity to meet with Pope Francis. According to Vatican sources June 15, there is no meeting currently scheduled between the two men.

The President’s entourage had originally requested for Biden to attend Mass with the pope early in the morning, but the proposal was nixed by the Vatican after considering the impact that Biden receiving Holy Communion from the pope would have on the discussions the USCCB is planning to have during their meeting starting Wednesday, June 16.

This sounds a bit too good/bad to be true, but it’s certainly possible. Biden and his team would loooooove to get some political cover with a papal audience, as would most US presidents, and might even expect it with his own status as a practicing Catholic.

It’s not clear why the Vatican would refuse to even meet with Biden, however. Popes meet with world leaders all the time, even those whose agendas cut significantly against Catholic teachings. Except on abortion, there isn’t that much space between Biden and Francis, just as there wasn’t between Francis and Barack Obama, who had no trouble getting a papal audience when in office. And let’s not forget that Obama had an audience with Pope Benedict XVI in Obama’s first year in office, too. That gives some reason for skepticism about the veracity of this report.

It’s pretty clear why the Holy See wouldn’t want to provide Biden with the optic of Pope Francis offering him communion, however. They wouldn’t want to bigfoot the USCCB on this specific issue, assuming the White House requested this at all:

In recent years, an increasingly focused group of conservative Catholics has been pressing the prioritizing of opposing abortion above all else and is seeking to keep Catholic politicians who in any way support abortion access from the sacrament, considered the core rite of Catholic worship.

For Biden’s team, that sometimes has meant dedicating staffers during busy travel weeks to make sure Biden, who supports abortion rights, avoids priests and bishops who would deny him the sacrament over his stance on the issue. The president was denied Communion in 2019 by a South Carolina priest who said any leader “who advocates for abortion places himself or herself outside of Church teaching.” …

This week at their annual spring meeting, the bishops of the U.S. Catholic Church — the largest faith group in the country — will debate the meaning of Communion and whether Catholic politicians who support abortion rights should be barred from receiving it. The conversation and a vote among the church’s top clerics could have significant ramifications because it centers on one of the most intimate moments of Catholic worship and binds it uniquely to a specific political and policy position.

The vote comes after two decades of deliberate, passionate focus by Catholic political and theological conservatives to make abortion a litmus test for the sacrament, while church teachings on poverty, climate, racism and authoritarianism, among other things, become more subjective to follow. It also comes after years of hardening toward abortion opponents within the Democratic Party.

This “both sides” formula repeats the same error found in other such reporting. Matters of policy regarding “poverty, climate, racism and authoritarianism, among other things,” are open to prudential judgment among Catholics, to the extent that specific teachings exist at all. The Gospel repeatedly calls us to fight poverty, in other words, and scripture assigns us to be “stewards” of the Earth, but it doesn’t say much about climate or authoritarianism. Prudential judgment means that we need to determine the best policies to fight poverty (for example), meaning those which do the greatest good overall. That arguably should push us toward private property and limited-governance capitalism — the policies that raised living standards by quantum leaps over the last 200 years.

Abortion is not a matter left to prudential judgment, however. The catechism and the canons strictly and explicitly forbid it in all circumstances, and state clearly that any cooperation in abortion creates an excommunication latae sententiae, which means “instantly by the act itself.” The question before the bishops isn’t whether to change that, but what level of cooperation invokes it. Does it have to be direct, as in either getting or providing a specific abortion, or does it extend to passing laws allowing them? Does it extent to voting for the politicians who pass laws to allow it?Those are the questions American bishops will consider, but even then the Vatican has made it clear that they don’t want it in the context of Biden or any one particular Catholic.

With that as context, the Vatican wasn’t likely to agree to have Pope Francis provide Biden with communion. But it seems very unlikely that this dispute would have scotched a meeting between Francis and any US president. Let’s wait for more corroboration before going with a Francis shades Biden narrative.