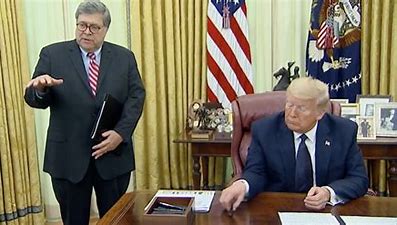 I’ll vote for Trump again in 2024 if he’s the nominee, Barr told NBC this morning. But he’s committed to not supporting Trump in the primary. He’ll support someone else.

Does he not understand, though, that agreeing up front to support Trump in the general election raises the odds that there won’t be a competitive primary to begin with? More on that in a moment.

First, watch this. It takes a special degree of partisanship to be reminded — over and over — of how little a person thinks of you personally and then to commit to supporting that person for president in the same interview. Here’s how Barr’s chat with the “Today” show began this morning…

“It’s par for the course. The president is a man who, when he is told something, he doesn’t want to hear, he immediately throws a tantrum.” -Former Attorney General William Barr responds to former President Trump’s letter to NBC pic.twitter.com/OO31HhY9xE

…and here’s how it ended:

BARR: Because I believe the greatest threat to the country is the progressive agenda being pushed by Democrats, it’s inconceivable to me I wouldn’t vote for the GOP nominee

GUTHRIE: Even if he lied about the election and threatened democracy, better than a Democrat? pic.twitter.com/xiUFbfMGns

There are three logically consistent positions a Republican might take with respect to a Trump 2024 candidacy.

If you like him and you believe he’s fit for office, you’ll vote for him in the general election.

If you prefer a different Republican but believe Trump is fit for office, you’ll vote for him in the general election if he wins the nomination. That’s standard primary politics.

If you don’t believe he’s fit for office, you’ll stay home or vote for a different candidate in the general election.

Does Bill Barr believe Trump is fit for office? It doesn’t sound like it. “I was pretty content with the administration up until the election. I supported his policies. He was always hard to work with and resistant to advice, but you could usually keep things on track,” he told “Today.” “But after the election, he went off the rails and wouldn’t listen to anybody.” A man capable of going “off the rails” shouldn’t lead the most powerful country in the world, but especially if the thing he happened to go off the rails about was the peaceful transfer of power.

Barr has no patience for the “stop the steal” nonsense. He claims in his new book that he told Trump to his face that his claims of election fraud were “bullsh*t.” He was an actual firsthand eyewitness to a U.S. president trying to overturn an election because he couldn’t cope with the reality that he lost.

And he’s ready to return that guy to power in 2024 instead of just going golfing or whatever on Election Day instead.

The flaw in Barr’s logic about supporting a primary challenger to Trump while committing to supporting the eventual nominee in the general election is that it ignores the fact that the GOP has been in a hostage crisis since 2016. There are two major camps in the party, the Trump-loving MAGAs and the Trump-tolerating “Never Democrats.” (Never Trumpers are a third component but a small one at five to 10 percent.) Since 2016, Trump and his MAGAs have threatened constantly to bolt the party if they don’t get their way. Trump palpably doesn’t care about the GOP as an institution; if he did, he would have held his fire against top-tier candidates like Doug Ducey and Brian Kemp this cycle rather than settle election grudges with them. Meanwhile, something like a third of Republican voters say they support Trump more than they do the party.

If Trump left the GOP out of pique and demanded that his fans come with him, there’s no telling how many would do so but it would almost certainly be enough to spoil Republicans’ chances in the general election. Because of that, the party has no choice but to cater to him and them even though they’re a minority of the base. By comparison, 56 percent of Republicans said they support the party more than they support Trump according to a poll released in January. That’s the “Never Democrats” group, the Bill Barr contingent that’s open to (or even enthusiastic about) a different nominee in 2024. But the GOP establishment feels free to take that majority for granted in pandering to Trump and his whims. Why?

Because the “Never Democrats” won’t shoot the hostage. They won’t stay home or bolt the party if they get stuck with Trump as nominee again but the MAGAs will if they get stuck with someone else, and that explains the entirety of Republican politics over the last six years. Barr’s embarrassing capitulation in the interview captures the asymmetry as succinctly as we’ll ever see. “Never Democrats” means … never Democrats. If that requires reelecting the tinpot authoritarian who inflamed a mob on January 6 to try to hold on to power illegally then so be it.

The obvious strategic move for any Ron DeSantis fan (or any anti-Trump Republican generally) to gain leverage for their guy is to draw the same sort of red line the MAGAs have: “I won’t support Trump in the general election. Give me any other Republican nominee and I’m with you. But if we get Trump 3.0, I walk.” That would give the party establishment something to think about. At the very least, it would force them to reduce the degree of pandering they do to Trump and to remain neutral if DeSantis were to challenge Trump for the nomination, as is increasingly likely, I think. So long as “Never Democrats” voters remains cheap dates for the GOP establishment by pledging their general-election votes up front, though, their concerns will continue to be ignored. Why should the RNC or Republican donors care what Bill Barr thinks about Trump if he’s willing to support Trump even now?

His vote in November 2024 is banked. It doesn’t need to be earned. Ignore him.

This is basic, basic strategic logic and yet prominent Trump critics continue to stumble over it. Few Republicans have been as critical of Trump over the past year as Chris Christie has but Christie won’t rule out voting for Trump in 2024. Mitch McConnell delivered a floor speech after Trump’s impeachment trial blaming him for the insurrection, an attack that permanently ruptured their relationship, yet McConnell has pledged to support Trump in 2024 if he’s the nominee as well. To find a Republican willing to say that Trump’s attempt to seize power illegally in 2020 is disqualifying for future office, you have to look to a critic as strident as Liz Cheney. The “Never Democrats” wing, true to their name, simply won’t withhold their votes or even threaten to withhold their votes in a general election.

And so we’re almost certainly going to get more Trump. Congratulations to Barr, Christie, McConnell and all the rest.