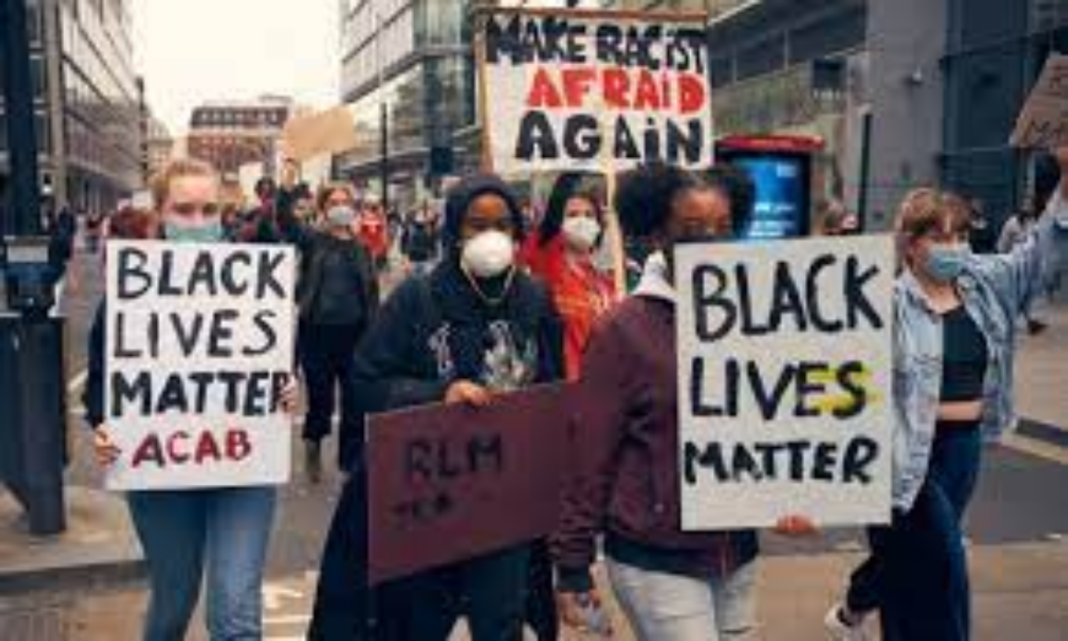 On May 25, 2020, George Floyd died under the knee of Minneapolis police officer Derek Chauvin and protests erupted worldwide. Support for Black Lives Matter — the movement that actually began as a hashtag in 2013 — surged. To this day, posts on social media continue to call for racial justice and an end to police brutality.

But also online are posts riddled with disinformation, including those specifically targeting BLM. Activists charge that those disparaging posts are part of an overall effort to undermine the movement and its message.

One post, for example, falsely claims the government has identified it as a terrorist group. Another that circulated widely claimed that BLM activists had badly beaten a group of elderly white people. That post was debunked by fact checkers who found the photos were of South Africans and had been online for years. It was removed, however Jorden Giger, an organizer with Black Lives Matter in South Bend, Ind., says there’s still plenty of disinformation online designed to create confusion and distrust.

“Like reports circulating that BLM is going to vandalize businesses in downtown areas, that we are targeting specific, you know, white communities, those kinds of things,” he says. ” It makes our supporters say, ‘OK, I don’t want to get involved in that.’ Right? So when those kinds of lies and when the disinformation just goes unchecked, you know, folks will believe it, if you don’t get ahead of it or respond to it appropriately.”

Giger says that’s why BLM launched an effort to stop disinformation and urges people to submit details about suspicious posts or stories to the Black Lives Matter website.

WinBlack/Pa’lante, a nonpartisan group created after the 2016 presidential election, also monitors disinformation aimed at people of color. Hundreds of organizers across the country formed a digital war room during last year’s election. They tracked bots that automatically send out scripted disinformation, often from Russia or other foreign governments trying to sow discord in the U.S. They tracked what are known as digital blackface accounts that steal images to masquerade as Black people and spread disinformation. Ashley Bryant, one of the co-leaders of WinBlack/Pa’lante, says they also found conspiracy theories about Black Lives Matter.

“That went from George Floyd not being dead to, you know, George Soros funding protests and the full out attacks on BLM where there’s foreign actors, there’s fake accounts pretending to be Antifa — all to actually just build this violent narrative around BLM,” she says.

Deen Freelon, a journalism professor at the University of North Carolina who studies digital politics, points to specific instances of disinformation about Black Lives Matter protesters engaging in violence.

Freelon says Twitter has been vigilant about rooting out state-sponsored disinformation from foreign actors. Facebook says it’s taken several steps, too, including working with nonpartisan and independent fact checkers to root out the spread of fake stories.

Information proven to be false can be removed for violating social media standards. That’s not the case when it comes to posts online that are technically considered an opinion– that’s harder to combat.

“Examples there include things like the notion that BLM is anti white, which, of course, is an opinion, that it is a hate group,” Freelon says. “That it’s somehow anti-family, that it is morally equivalent to far-right groups, and then there are some things that kind of blur the line between fact and opinion.”

Critics of Black Lives Matters, like Mike Gonzalez, a senior fellow at the conservative think tank The Heritage Foundation, says its the movement’s supporters that are getting duped.

“I feel that Black Lives Matter is one of the greatest sources of disinformation,” says Gonzalez, who is the author of an upcoming book on the organization and Marxism.

“They have good Americans, good Americans, well intentioned Americans who do not want to see racial injustice, and rightly so, putting up signs on their lawn about Black Lives Matter,” he says. “They (BLM) have manipulated the good nature of many people who think what they’re doing, in my view, is trying to promote a philosophy that is not going to be good for this country, will destroy this country and will destroy our way of life.”

And then right-wing pundits such as Rudy Giuliani, Candace Owens and Carol Swain amplify often baseless anti-BLM messages to wider audiences. On a Fox News talk show last July, Giuliani said, “Black Lives Matter wants to come and take your house away from you. They want to take your property away from you.”

On a YouTube show the following day, Swain said, “They (BLM) are using Black people to advance a Marxist agenda.”

Patrisse Khan-Cullors, one of the three co-founders of Black Lives Matter, responds to some of that on her YouTube channel.

“I need to set the record straight. Am I a Marxist?” she asks. Khan-Cullors explains that she does believe in Marxism but laughs at online comments that say she’s pushing a communist agenda.

Tomiko Brown-Nagin, dean of the Radcliffe Institute at Harvard, says some of the disinformation surrounding Black Lives Matter could be from the old-style, anti-civil rights playbook of the 1960s. The FBI under J. Edgar Hoover and segregationists repeatedly used disinformation in an attempt to besmirch that movement.

“So opponents characterized activists as lawbreakers or as violent when overwhelmingly they were nonviolent,” Brown-Nagin says. “Also Martin Luther King Jr. and members of his inner circle were said to be communists or communist sympathizers.”

Just as the civil rights movement of past years, Black Lives Matter has seen its support both rise and decline after months of protest and the conviction of former police officer Derek Chauvin. While polls show a large majority of African Americans continue to back the movement — overall support has dropped from record levels seen after Floyd’s death. How much of that loss is due to disinformation is difficult to measure but what’s certain is the battle over controlling what people believe about Black Lives Matter and its influence is ongoing.

Great Wall of China – Which Section to Visit?