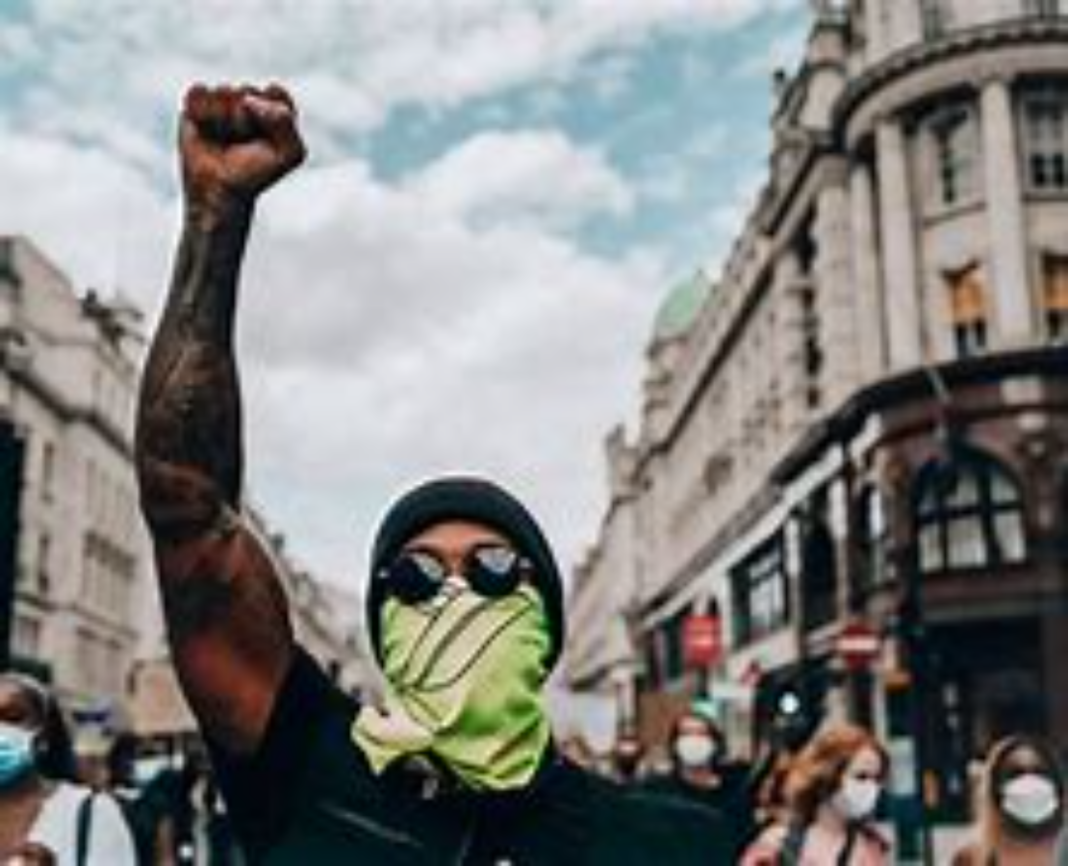 New York, NY — After a skirmish involving NYC’s vaccine mandate erupted at Carmine’s restaurant in the Upper West Side last week, Black Lives Matter of Greater New York and related organizations converged in front of the establishment Monday to protest.

Shortly after the women’s group was seated, three men arrived to join the party inside but were denied entry because they failed to show vaccination documents, lawyers from both sides confirmed to The New York Times.

As the Times reports, the women got into a fight outside after the host allegedly used a racial slur and made derogatory remarks, accusing them of having fraudulent vaccination cards the lawyer who represents one of the women, Dr. Kaeita Nkeenge Rankin told the Times.

‘The host spat out the N-word,‘ said Justin Moore, the women’s lawyer. In response to the brawl, NYPD arrested three Black women on criminal mischief and assault charges.

At the rally, the speakers railed against the racial obscenity that was allegedly uttered as well as the perceived discrimination against the black unvaccinated patrons.

BLM NYC co-founder and chairman Hank Newsome alleged that the restaurant staff treated Black women with hostility and accused Carmine’s of covering up “their employees’ actions by utilizing the vaccination passport.” Carmine’s should release video footage of the incident, which he believes will settle the issue that the host was the aggressor and the women were wrongfully charged.

On Tuesday, Carmine’s owner Jeffrey Bank released the surveillance tape, which shows that it was a Texas tourist, not the host, who struck first.

“This attack was entirely unprovoked,” Banks told the Post. Furthermore, he vehemently denied that any of his employees ever made a racial slur.

Chivona Newsome, the other co-founder of BLM NYC, spoke more specifically about Mayor Bill de Blasio’s vaccine mandate. She implied that the edict has resulted in repeats of historical episodes when blacks were disenfranchised from society.

“Seventy-two percent of Black people in this city from ages 18 to 44 are unvaccinated. So what is going to stop the Gestapo, I mean the NYPD, from rounding up Black people, from snatching them off the train, off the bus?” she added.

In response to Chivona Newsome’s commentary, she suggested Black Lives Matter might rebel in the future to “pursue justice”-like it did in the aftermath of George Floyd.

Now THERE is something we can all agree on; I am glued to my television to see this one play out. It’s like putting a wasp in a jar with a scorpion; I don’t know who is going to win, but there is a whole lot of stinging that is about to take place.

“We’re putting this city on notice, that your mandate will not be another racist social-distance practice. Black people are not going to stand by, or you will see another uprising. And that is not a threat; that is a promise,” she said. “The vaccination passport is not a free passport to racism.”

“We are serving notice on the mayor, on the governor, on the restaurant industry that we will not allow for you to use this pandemic, vaccination cards, and masks as another reason to be racist, to put us in prison. Because there’s enough of us in there,” she said.

“We’re putting this city on notice, that your mandate will not be another racist social-distance practice. Black people are not going to stand by, or you will see another uprising. And that is not a threat; that is a promise”

In response to the pandemic, a Rise and Resist leader focused the discussion on the partisan blame game exploding amid the crisis.

“The Republican Party and elected officials and pundits on Fox News try to blame the entirety of the unvaccinated COVID crisis on Black people, even though Black people are twelve percent of the population,” he said.

But while the speaker said the political Right is guilty of pinning the pandemic on the unvaccinated, of whom many are blacks, a female African American in the crowd told National Review a different tale.

Despite having worked in the restaurant industry as a college student, Maya, who insisted that she not be identified, said that her community faces many challenges and recognize that Democrats, not Republicans, are spearheading vaccine mandates- therefore resurrecting racial discrimination and conflict.

“Most Black people aren’t going to acknowledge that the Democratic Party has disenfranchised us. Malcom X said it’s foxes and wolves. The fox pretends to be your friend to your face but passes laws behind your back to harm you. The wolf is not your friend, they don’t like you, and they treat you as such. But who do you respect more? Black people tend to fall for the fox,” Maya said.

Because she refused the vaccine, she says her job now is in danger. She also blames Democrats for not acknowledging economic equity.

“This vaccine mandate is disproportionately affecting people of color. People shouldn’t be forced to do it. It’s ‘for your health,’ but they’re willing to ruin people’s lives to protect against a virus with over a 99 percent survival rate … This is going to be the new Jim Crow, and it’s going to affect mostly people of color,” she said.

I am gonna go out on a limb and say that she’s probably right on this one.