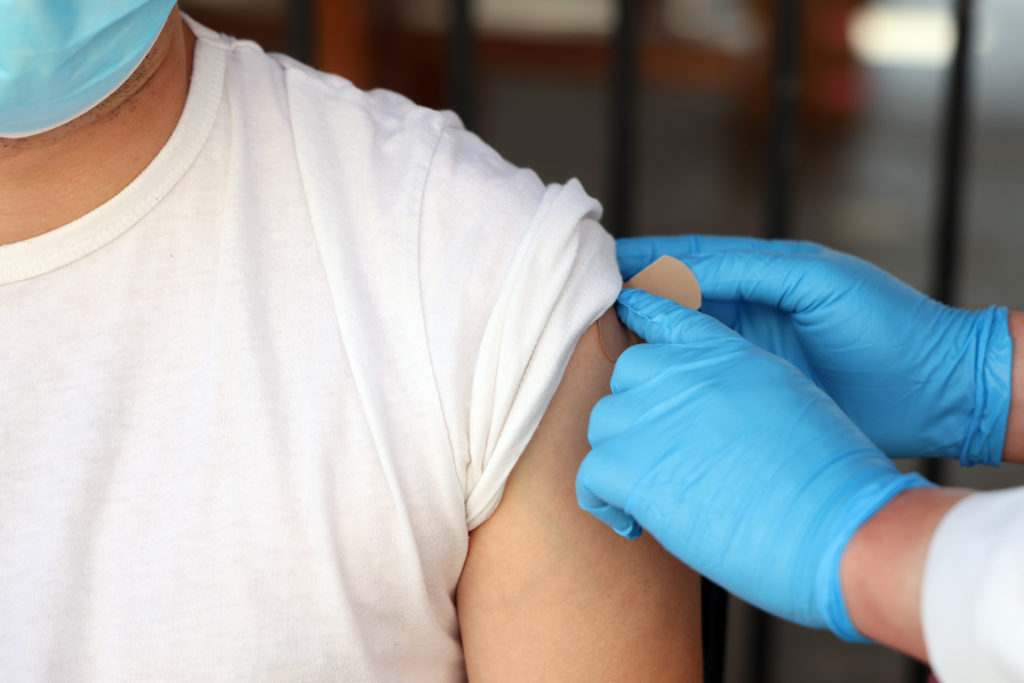 Federal officials have paused the rollout of Johnson & Johnson’s COVID-19 vaccine to examine what the data say after six women reported developing rare but severe blood clots after receiving the vaccine. So far, nearly 7 million people in the United States have been given the one-shot vaccine.

“We are recommending a pause in the use of this vaccine out of an abundance of caution,” read a joint statement from the Food and Drug Administration and the Centers for Disease Control and Prevention Tuesday. The pause is expected to last for “a matter of days,” Dr. Janet Woodcock, acting FDA commissioner, said during a press briefing Tuesday. Both agencies urged people to contact their health care provider if they develop severe headache, abdominal pain, leg pain, or shortness of breath within three weeks of receiving the Johnson & Johnson vaccine.

The six women who reported blood clots were between ages 18 and 48 and had received the Johnson & Johnson vaccine between six and 13 days before reporting side effects. One woman died, and another has been hospitalized with severe conditions.

While tragic, experts say these adverse reactions are rare, occurring in fewer than one in 1 million doses of the Johnson & Johnson vaccine, which underwent clinical trials with tens of thousands of participants. Investigators have yet to determine if the rate of incidence is any higher than it would be in absence of the vaccine.

“These events appear extremely rare, but COVID vaccine safety is a top priority for the US government,” Woodcock said.

“Don’t get an anxiety reaction, because, remember, it’s less than one in a million,” Dr. Anthony Fauci said in a White House press conference of the risk of this type of blood clot.

“However, having said that, pay attention,” he advised people who have recently gotten the J&J vaccine. “Do you have symptoms? Headache? Do you have shortness of breath, chest discomfort, anything that resembles a neurological syndrome?”

What is far more common are fatal cases of the coronavirus itself. In the U.S., one out of 588 people have died due to COVID-19, and the virus has infected one out of 10 people, according to confirmed case counts where people had access to testing.

Dr. Anne Schuchat, principal deputy director of the CDC, said the agency was committed to investigating the findings, but stressed the efficacy of vaccines to limit the spread of COVID-19. The virus has killed more than 560,000 Americans.

No, according to federal experts in a press briefing Tuesday, no side effects of this kind have been linked to the Pfizer and Moderna vaccines. These dual-dose vaccines, along with the Johnson & Johnson vaccine, are the only vaccines that the FDA has authorized for emergency use in the U.S.

READ MORE: The powerful technology behind the Pfizer and Moderna vaccines

Pfizer and Moderna rely on mRNA technology, which had been in development for roughly 15 years before the coronavirus pandemic created an opportunity to stand up such a vaccine. The Johnson & Johnson vaccine is based on adenovirus vector technology, a more conventional form of vaccine research and development. The AstraZeneca vaccine (which European regulators have been cautious about using in recent weeks after isolated reports of blood clots) was built off this same adenovirus vector model.

Can the U.S. still administer 200 million vaccine doses on schedule?

Before Tuesday’s announcement, Johnson & Johnson made up less than 5 percent of all vaccine doses administered, according to a statement from Jeff Zients, coordinator for the White House COVID-19 Response. The U.S. already has enough vaccine doses from Pfizer and Moderna to cover 300 million Americans, he said. This week alone, Zients said there will be 28 million doses of those two-shot vaccines available. This announcement should not derail President Joe Biden’s promise to administer 200 million vaccine doses during his first 100 days in office, Zients said.

“This is more than enough supply to continue the current pace of vaccinations of 3 million shots per day,” he said.

Federal vaccination sites, Walgreens, Wegmans and CVS locations temporarily halted their use of the Johnson & Johnson vaccine. For those who had been scheduled to receive the Johnson & Johnson vaccine in the coming days, Schuchat said that public health workers would reach out to help people reschedule to receive either Pfizer or Moderna shots. While the federal government encouraged states to do the same, states were allowed to decide if they wanted to withhold the J&J vaccines. By Tuesday afternoon, most states had followed suit, the New York Times reported.

“This may be a bit bumpy,” Schuchat said. “We do want to make sure people who are scheduled to get vaccinations will be able to get that.”

Vaccination plays a critical role in helping the U.S. and world gain control over the pandemic, Schuchat said. When asked if the pause posed an overreaction to a handful of cases of reported blood clots out of 6.8 million shots administered, Schuchat said, “We are committed to safety and transparency and to expeditiously learn as much as we can so further steps can be taken.”

What’s next for the Johnson & Johnson vaccine?

Regulators are moving quickly to study the blood clot data, determine what is happening and figure out how best to proceed. On Wednesday, the Advisory Committee on Immunization Practices, an independent body of medical and public health experts who develop and review vaccination guidelines for the CDC, is scheduled to meet to assess these cases and their significance amid the broader vaccine rollout effort.

This pause is evidence that federal regulators are serious about transparency, said Dr. Jesse Goodman, a former chief scientist for the FDA. Calling the data that drove the announcement “very preliminary,” Goodman said this pause illustrates the importance of having “really really strong and robust safety systems in place that can monitor for adverse events.”

“Since both Johnson & Johnson and AstraZeneca vaccines have been thought to be an important part of the global solution and supply, it points to the continued importance of development of additional vaccines.

Amid lingering vaccine hesitancy within some communities, Dr. Leana Wen said she supported this level of transparency from federal regulators.

“I’m glad that they are being so thorough and public in their investigation,” Wen said.

Editor’s note: Johnson & Johnson is a funder for the PBS NewsHour.

People leaving prison have a hard time getting jobs. The pandemic...