Jasmina Husidic does not pause much for niceties. She stops the car, jumps out, says a quick hello and disappears in a supermarket. She doesn’t have much time on this gray, rainy day in February in Velika Kladusa in northern Bosnia and Herzegovina.

Before nightfall, Husidic needs to hand out rice, oil and meat as well as shoes and warm coats to migrants and refugees sheltering in the forest or abandoned buildings around her hometown. She has been looking after them every evening after finishing her job at a Bosnian government agency for over a year.

Husidic has volunteered to help to migrants and refugees in Bosnia

Ever since Hungary erected border fences, many refugees and migrants have tried to enter the European Union via Bosnia. Although hardly anyone plans to stay, Husidic tries to make them feel welcome, she says, as she packs donated winter boots and jeans into plastic bags.

“My two daughters are university students, one in Austria, the other in Germany. If they have a chance at a better life, why shouldn’t others,” she says.

Husidic’s first stop is a dilapidated former factory, known as the “chimney,” because a chimney is what is clearly visible even from afar. “Can you help me, please?” she calls out to a young man approaching her and pushes several bags into his hands.

Together they trudge to the entrance, walking through a mix of mud and trampled empty plastic bottles. On the second floor of the building, a few Algerian men have pitched tents. One of them shows Husidic a photo of Daria, his little daughter, on his cell phone. “Very cute,” says the 49-year-old, stopping for a few minutes to chat before she moves on. 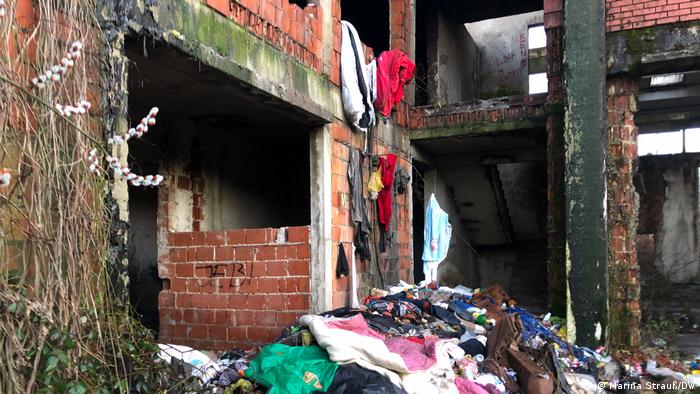 “Sometimes it’s all very hard,” Husidic says on her way back to the car. She often feels bad because she can’t do more — which is why she and other Bosnians are founding an aid group. So far, she has been working with an Austrian non-governmental organization, which also provides her with donations of clothes, shoes and money from Germany and Austria.

They hope to register their aid group soon since how they currently provide help is — officially — illegal. Unlike some others in her group, Husidic says she has not run into any problems so far, perhaps because her brother works for the police. They try not to be ostentatious, they don’t “challenge anyone. That’s better in this situation,” Husidic says.

The “situation” is that not all of the locals welcome the thousands of migrants and refugees in the country with open arms.

“I am ashamed of some of the things people have done here. Many bad things have happened,” she says. One of the Bosnian volunteers says someone reported her to the police for helping the migrants and refugees.

Representatives of aid organizations from other European countries confirm that the Bosnian authorities are making it more difficult to support refugees who are not living at the official shelters — like the people who have found shelter in abandoned buildings or the forest and are looked after by Husidic. They do not want to speak openly because their organizations are currently in the registration process.

Deportation for those without work permits

In Bihac, an hour south of Velika Kladusa, the police minister of the Una-Sana Canton region, Nermin Kljajic, says people who comply with the law have nothing to fear. However, he adds that foreigners working without permits will be deported. Foreign aid groups have criticized the difficult and lengthy registration process.

Husidic’s last stop for the evening is a spot in the forest where several Bangladeshi men are camped out. A few of them crowd around a small fire —it still gets cold here at night. 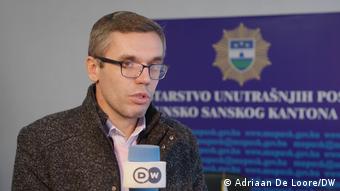 Bosnian authorities do not like to see camps like this one. As far as Kljajic is concerned, they endanger the safety of citizens.

“We have to make sure that food is only distributed in official shelters,” he tells DW.

Husidic, however, says she doesn’t want people to be left to their own devices in the forest. Jahanjir Alom Sumon, a 22-year-old Bangladeshi, says he and the others are only doing reasonably well because of volunteers like Husidic: “Some bring us food, some bring us clothes or shoes.” 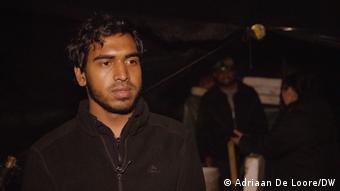 Jahanjir Alom Sumon says he aims to travel to Italy

But all they really want is to move on to the EU as quickly as possible, first to Croatia, then on to Italy, then perhaps to France or Germany.

Husidic says she hopes their dreams of a better future will come true. But as long as they are still in her hometown, she will do what she can to help, every evening.

This article was translated from German.