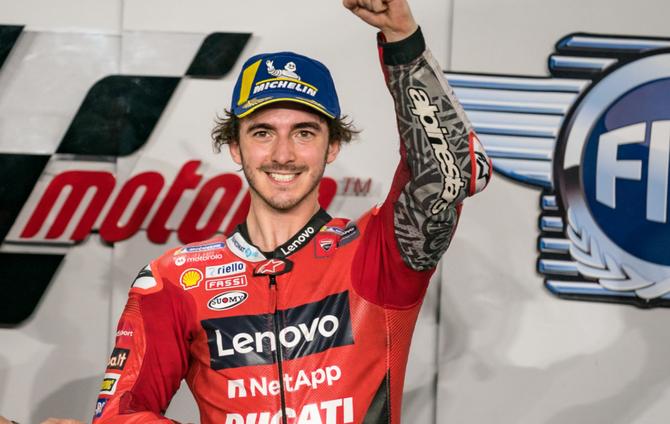 Francesco Bagnaia targeted “a really great result” at the Qatar Grand Prix after setting a stunning lap record on his factory Ducati debut.

Third-year MotoGP rider Bagnaia had finished 15th and 16th in his two seasons with Pramac Racing but has quickly focused on loftier ambitions following his bow with the factory team.

Ducati – winners of the previous two Qatar GPs with the since-departed Andrea Dovizioso – had been fast all week at the season opener, with Jack Miller setting the practice pace in his 100th grand prix with a best time of one minute and 53.387 seconds ahead of second-placed team-mate Bagnaia.

But Bagnaia later suggested he had believed he could run in less than 1:53 in qualifying and so it proved, a magnificent 1:52.772 setting a two-wheel lap record at the Losail International Circuit.

That was enough for a healthy 0.266-second gap to Fabio Quartararo, while Bagnaia gave veteran Valentino Rossi – a four-time Qatar winner – a tow to take him to the front of the second row.

Rossi has 10 podiums at Losail and his next in MotoGP will make him the first to 200.

Even from his commanding position, Bagnaia could be forgiven for being pessimistic after his year-high six abandonments in 2020 – including five in the final eight races – but he was full of positivity following an outstanding display.

“I’m very happy,” he said. “Already yesterday I was thinking it was possible today to arrive at (1:)52.

“In the second attempt, when I started pushing, I thought it was possible. After the third sector, I was very close to this lap time.

“I’m very happy; my first pole position in my first race with this team. I would like to make everything possible to finish the race tomorrow in the best way possible. I think we can make a really great result.”

Miller had to settle for fifth, next to Rossi, as he pursues a third straight podium for the first time in his career following two to end 2020.

Quartararo also had reason to be disappointed with his day as he mistimed his second run and the chequered flag denied him the opportunity to challenge Bagnaia.

Another debutant at a factory team, Yamaha’s Quartararo won the first two races of the season last year but has had only one podium in 12 outings since.

The 21-year-old, who has colleague Maverick Vinales – the 2017 Qatar winner – behind him in third, said: “It’s a shame I couldn’t do the second lap on my second run. I had the chequered flag for a second.

“But I’m quite happy. I think we did a great lap. We tried something in FP4 that was bad, honestly – I didn’t feel great on the bike. But I feel that we have great potential for tomorrow.

“We will go with that bike for the race because it’s the one that I feel good [on]. I think we made too much changes today, but I’m feeling happy.

“I think we did a great, great job in the qualifying. Now we’re just missing the race. I can’t wait.”

Neither the Ducatis nor the Yamahas should have to worry this weekend about defending champion Joan Mir, who failed to capitalise on the absence of Repsol Honda great Marc Marquez.

Mir was forced to contend in Q1 and will start from 10th, having finished eighth in his only previous Losail entry in 2018.