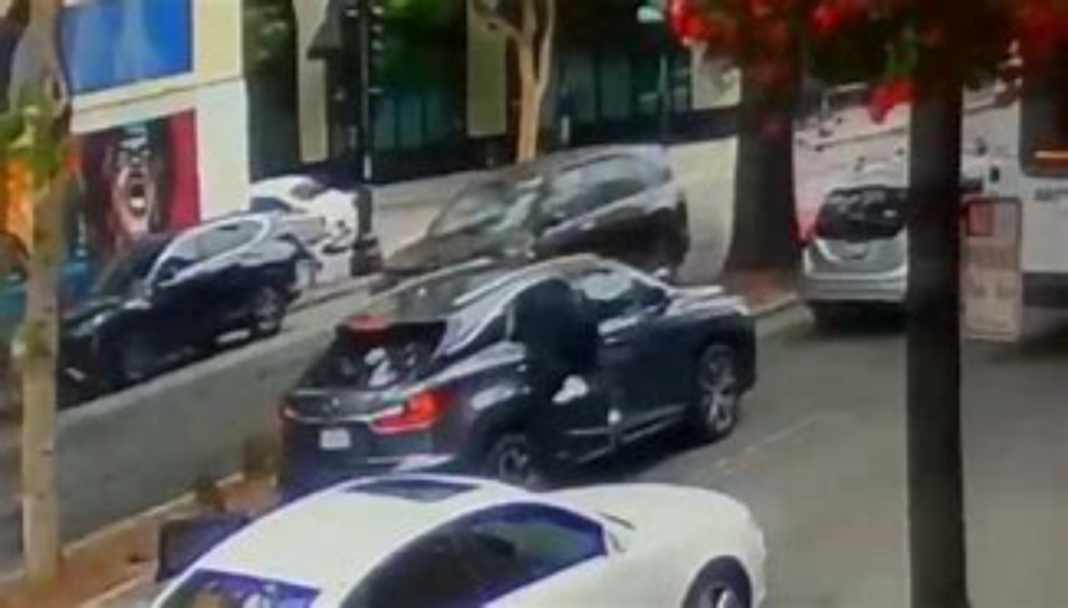 Oakland, California – A thief smashed a car window, climbed into the vehicle and robbed a female driver who was stuck in traffic in broad daylight.

The robbery took place on July 7 after the woman had just left a nearby bank.

The victim, who wants to remain anonymous, told ABC 7 News she thought she was going to be killed and didn’t leave her house for several days after the robbery.

Brazen video out of Oakland shows the moments a woman robbed and her car broken into while driving along Broadway in the middle of the day.

Surveillance video used in The Oakland Police Department’s investigation of the incident shows a man jump out of a white sedan and attempt to break the woman’s passenger side window. He then smashes the back passenger side window and climbs inside to steal her purse and backpack.

The woman was understandably shaken, even several days following the incident which happened before the 22nd St. intersection after she left a nearby bank.

She did not want to go on camera but said during a phone call with ABC7 News, she thought she was going to be killed.

“I was yelling and looking at him and we made eye contact,” said the victim.

𝗕𝗿𝗲𝗮𝗸-𝗜𝗻 𝗥𝗼𝗯𝗯𝗲𝗿𝘆 𝗪𝗵𝗶𝗹𝗲 𝗗𝗿𝗶𝘃𝗶𝗻𝗴: The driver told me she thought she was going to die.
⠀
The victim who would like to remain anonymous. She left the bank 7/7 & was stuck in traffic at Broadway & 22nd when a man approached her car… (1/4)#oakland pic.twitter.com/aQOgj99Qgt

The woman was screaming for help while she was being robbed and it wasn’t until 30 minutes later someone called the police.

What’s sad to me is that the woman said it took awhile for anyone to offer help. She said she was screaming during the ordeal. It wasn’t until 30 minutes later someone called police. (I believe her phone was stolen in the incident.)

Oakland city council recently voted to defund the police and strip more than $18 million from the OPD’s budget.

Crime has increased 90% in the Democrat hell hole of Oakland and now the city is having break-in robberies while driving like they do in Brazil and Argentina.