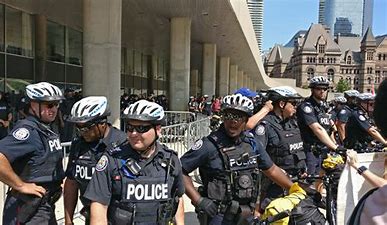 The Ottawa police are a goon squad for the Trudeau regime.

This footage shows one of many police beatings in Ottawa during the government’s ongoing crackdown on peaceful protesters. It was shot this morning by a bystander named Brian Kanabrowski. pic.twitter.com/3ypeTb8lc4

Elderly people are being trampled on the ground.

Unsurprisingly, Canada’s mainstream media isn’t reporting any of this, but these video clips are all over the internet and people all over the world are horrified.

And Canadians are speaking out.

Tens of thousands have taken to the streets to once again peacefully protest.

This is Calgary today:

Calgary’s Freedom Protest is absolutely massive. Here’s an aerial shot showing thousands upon thousands of protesters in the streets. pic.twitter.com/REyUCfWj8j

Calgary is on fyre pic.twitter.com/LMzyCRHHf2

How is Justin going to stop that? Will he send in the goon squads for that as well and seize everyone’s bank accounts?

I can tell you this, the good people of Canada are horrified by what they’re seeing their police do to peaceful citizens.

So much so, that they’re flooding the “911” emergency numbers with complaints about the police.

It’s gotten so bad, that the brutal Ottawa police had to take to Twitter to ask citizens to stop calling.

Here’s what the brutal Ottawa police said on Twitter:

“We know the events in #Ottawa are upsetting. Still, we’re asking people to stop calling critical emergency and operational phone lines to express displeasure about the police action to remove an unlawful assembly downtown.”

We know the events in #Ottawa are upsetting. Still, we’re asking people to stop calling critical emergency and operational phone lines to express displeasure about the police action to remove an unlawful assembly downtown.

“Talk about tone deaf. The Ottawa Police actually don’t realize why they’re becoming one of the most hated organizations in the history of the world, right now.”

“These cops are sheep too, being led to slaughter, they’re following a leader who’s going to disgrace them.They will be tried for war crimes.”

“I hope those phone calls don’t stop. I hope they reach a fever pitch!”

“Might as well just call them the Ottawa Stasi”

“Canada has lost its place in History. Sold itself to the Socialist Party. Canada is weak and pathetic. 40 straight years of corrosion.”

“Hi Ottawa Police! I was going to stop calling but you keep doing bad things so I keep calling.”

“Or what? You’ll hunt them down, steal their money and label them terrorists? Or is this more of a load them in the boxcars moment?”

“Translation: “We don’t want to hear/listen to complaints about us CRUSHING a legal protest using physical violence” downtown.”

“Awww, you poor baby. The last thing you want is accountability.”

“You are an absolute abomination. You police by consent. You are over your reach. The whole world is watching. We are watching how you treat your people. You won’t ever be forgiven for this. Ever.”

“There’s no such thing as an unlawful assembly against tyranny. Your obviously not Gods police force.”

“They do not want you calling them to complain about them. “

Remember when Justin Trudeau called this a “small fringe group”?

He lied about that.

What else is he lying about?