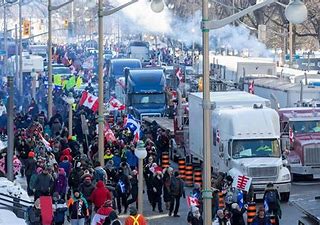 While numbers have reportedly dropped somewhat since last weekend, Ottawa is still thronged with pro-freedom truckers and their supporters. The protest has primarily been directed against covid mandates, but it has morphed into a broader rebellion against the oppressive bureaucratic state. The Epoch Times reports:

The protest on Feb. 5 featured speakers, music, dancing, and a singing of the Canadian national anthem. There were also tables set up to serve free food and drinks to protesters.

The number of protesters dropped after last weekend, the first weekend of the Freedom Convoy demonstration, but many joined again this weekend.

Several other large protests were held on Feb. 5 in provincial capitals around the country against COVID-19 mandates.

Canadian authorities are playing the role of comic book villains:

Ahead of the Feb. 5 protest, Ottawa police chief Peter Sloly said police are implementing a “surge and contain strategy” to deal with the protesters. This includes sending 150 more police officers to the protest area in Ottawa’s downtown core, barricading the area with concrete and heavy-equipment barriers, as well as “increased efforts” by national, provincial, and local intelligence agencies to target those “who are funding/supporting/enabling unlawful and harmful activity” by protesters.

When the “unlawful and harmful activity” involves burning down two miles of small businesses, as the George Floyd rioters did in Minneapolis, let me know. In the meantime, it looks like the Canadian government is concerned not so much about illegal activity as about the populist threat to its own prerogatives.

The liberal press continues its absurd efforts to smear the demonstrators with recycled falsehoods:

Protesters have shut down downtown Ottawa for the past eight days, with some participants waving Confederate or Nazi flags and some saying they wanted to dissolve Canada’s government.

What you actually see in photos of the protests is a sea of Canadian flags.

As we noted here, GoFundMe impounded close to $10 million that had been raised to support the truckers and announced a plan to require donors to submit requests for refunds and to give the balance to a different charity. The Ottawa police thought this was a great idea; again, not a good look:

We want to thank @gofundme for listening to our concerns as a City and a police service. The decision to withhold funding for these unlawful demonstrations is an important step and we call on all crowdfunding sites to follow.

But GoFundMe’s announced plan was pretty obviously a criminal fraud, as Ron DeSantis pointed out:

It is a fraud for @gofundme to commandeer $9M in donations sent to support truckers and give it to causes of their own choosing.

I will work with @AGAshleyMoody to investigate these deceptive practices — these donors should be given a refund.

GoFundMe quickly backtracked and agreed to automatically refund all donations. The truckers are now working with GiveSendGo. Meanwhile, can anyone explain why every single institution and platform, and almost all large companies, have been taken over by the authoritarian left?

We’ll give the last word, for now, to a civil rights lawyer:

Keith Wilson, a lawyer with the Justice Centre for Constitutional Freedoms who is representing the organizers of the protest, said the new measures by Ottawa police are similar to those used by oppressive regimes around the world.

“[Sloly] effectively announced that he is going to be taking away Canadians’ charter right of peaceful assembly and freedom of expression,” Wilson said in a video on Feb. 4.