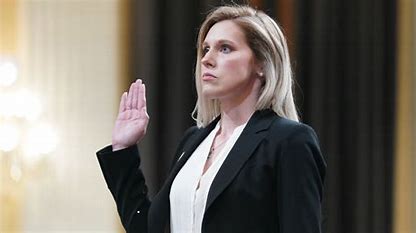 I’ve long ago lost count of how many “mostly peaceful” left-wing protests I’ve watched and written about over the years. By now it must be several hundred. One thing you almost always see in these events is that they often take a clear turn at some point. At one moment there’s a group of people shouting slogans like “We are the 99 percent!” or “Hands up, don’t shoot!” or maybe just the classic “No justice, no peace!”

Usually when this is happening there are police around to make sure things don’t get out of hand. And at some point all of that energy needs a focus. If there are counter-protesters, the mob will turn on the counter-protesters, but often they just turn their focus on the police. This was especially true in the summer of 2020 because those were explicitly anti-police marches. But my point is that it really doesn’t matter what the march is about. At some point, the mob will find some reason to turn their energy against the police.

I think Capitol Hill police officer Caroline Edwards described that moment pretty clearly in her testimony about January 6. “It was the crowd led by Joseph Biggs and they were mostly in civilian clothes, some had military fatigues. You could see people with bullet proof vests on,” Edwards said.

“He started asking us questions like ‘you didn’t miss a paycheck during the pandemic’…our payscale was mentioned and started turning the tables on us,” Edwards said. She continued, “I’ve worked, I can conservatively say, probably hundreds of civil disturbance events. I know when I’m being turned into a villain. That’s when I turned to my sergeant and I stated the understatement of the century. I said ‘Sarge, I think we’re going to need a few more people down here.’”

After conferring for a moment, Biggs and the other guys started attacking the bike racks which were serving as a barrier. Video shows what happened next:

No one approaching the Capitol in this video did anything to help U.S. Capitol Police Officer Caroline Edwards…
No one. pic.twitter.com/IAQp7q0oEg

Here’s how Edwards described it:

“I felt the bike rack come on top of my head and I was pushed backward, and my foot caught the stair behind me, and my chin hit the handrail, and at that point, I had blacked out, but the back of my head hit the concrete stairs behind me,” she recounted to the committee.

She suffered a concussion but when she came to she immediately got back on the line trying to hold the mob back:

“It was something like I had seen out of the movies,” Edwards told the committee and a prime-time national television audience during testimony that was both gripping and gut-wrenching. “I couldn’t believe my eyes. There were officers on the ground they were bleeding. They were throwing up. … I saw friends with blood all over their faces. I was slipping in people’s blood.”

That part of her testimony came in response to a question about one memory she had of that day. “It was carnage; it was chaos,” she said. Watch her whole response.

This was a violent mob engaged in a battle with police. On January 9 I wrote about a 30 minute video of a confrontation that took place in a narrow hallway leading into the Capitol. Here’s a bit of that:

The entire crowd of rioters pushed forward as one big mass. One guy with a camera decided he’d had enough. “I’m out, I’m out” he said before retreating. Someone else at the front shouted, “Liberty or death!” They were intended to be fighting words but the rioters seemed stunned by the combination of the pepper spray and baton strikes from the police. The cops once again pushed them back to the outer doorway.

At this point the cameraman was positioned very close to the front of the line. There was a lull in the action and we could see the faces of the cops up front. They looked exhausted. They were breathing hard. Their helmets were covered with orange pepper spray. Someone in the mob chanted “Traitors! Traitors!” at them.

This was a violent mob that had turned on the police. They may have been on the other side of the aisle politically but in practice they behaved just like every mob of left-wing goons I’ve watched attacking police over the past 15 years. The officers who did their best to hold the line, including Caroline Edwards (who can’t weigh more than 130 pounds), were heroes that day.

Here’s her full testimony cued up to the point after the video above was played.

Israel should retaliate against Iran over ship attack