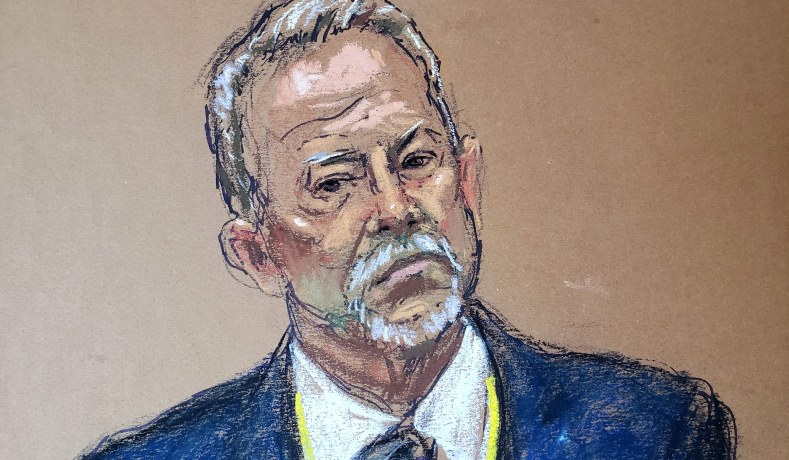 The Chauvin defense called its big witness Tuesday afternoon, retired federal and state law-enforcement officer Barry Brodd, an expert in police training and the use of force. Some of his testimony was preposterous — particularly the claim that if three police officers physically restrain a person prone on an asphalt street for over nine minutes, with his arms cuffed behind his back, with significant parts of the officers’ body weight pressing down on him, with an officer’s knees occasionally grinding into his neck and shoulders, and with his needing to press his face onto the street to try to shift into a breathing position, that is not a use of force, but merely a “control technique.”

Apart from that, the testimony was an overall disaster for the defense. The danger in presenting a defense case, especially in a prosecution that is so video-dependent, is that it allows the prosecutor, through leading questions on cross-examination, to walk witnesses through the video, explaining to the jury moment-by-moment exactly what the prosecution’s theory of the case is. If he does this skillfully, the prosecutor turns his “questioning” into the equivalent of a summation.

Suffice it to say that Steve Schleicher did it very skillfully on behalf of the state.

Schleicher blew Brodd’s testimony to bits. He induced the expert to acknowledge that, according to the Minneapolis Police Department (MPD) guidelines — to say nothing of common sense – physical restraint that renders a detainee unable to move about is a use of force. Then, even accepting for argument’s sake Brodd’s specious distinction between force and control, the prosecutor got the expert to acknowledge that what he described as “control” would rightly be deemed force if it caused pain to the detained person. Schleicher then proceeded to show that Floyd was in a constant state of pain while the officers held him down.

Indeed, in the examination’s most memorable moment, Schleicher played a part of the recording of the detention in which Floyd cried out, “My stomach hurts, my neck hurts, everything hurts. Give me some water or something.” As Floyd said these things, Chauvin responded, “Ah-hah, ah-hah.”

Schleicher then got Brodd to concede that his “no use of force” testimony was premised on the fiction that Chauvin had caused Floyd no pain.

Beyond that, Brodd conceded that it is excessive force for a police officer to use a tactic that causes pain if the suspect is not resisting. Combined with Brodd’s admission that force must be reasonable throughout a police interaction with a suspect — i.e., if a suspect starts out resisting, police must modulate if he stops resisting — Brodd’s testimony was an implicit acknowledgment that Chauvin used excessive force on Floyd.

This became even more dramatically apparent when Brodd initially refused to concede that Chauvin had pressed his body weight onto Floyd with both legs. Schleicher then walked him through the video and still images of Chauvin with his left knee on Floyd’s lower neck and right knee on Floyd’s rib cage — and, at one point, with the toes off the ground.

Schleicher had a field day with Brodd’s portentous assertion that police are highly trained to maintain “situational awareness.” In addition to stressing Chauvin’s patent awareness that Floyd was in pain, the prosecutor had the witness concede that the defendant had been told by his fellow officers that Floyd had lost consciousness, ought to be rolled over on his side (to facilitate breathing), and had no pulse.

While defense attorney Eric Nelson had made much of the crowd presence and the possibility that it could pose a threat to the police, Schleicher had Brodd conceding that the crowd was small and posed no threat to the police. The crowd also told the cops that Floyd was not resisting and had become non-responsive, but that Chauvin appeared to be cutting off his breathing — which, Brodd admitted, appeared to be true and to be the kind of information a reasonable, “situationally aware” officer would take into account.

In addition, Brodd admitted that an officer should de-escalate from a restraint tactic that could cause pain if a suspect is not resisting, whereupon Schleicher demonstrated that Chauvin maintained a neck-and-back hold on Floyd, which had caused Floyd actual pain, for four minutes after Floyd had lost consciousness and had no pulse.

The foundation of Chauvin’s defense is that he had reason to fear that Floyd would regain consciousness and begin resisting arrest again. Schleicher elicited from Brodd the explanation that there is a difference between a threat and a risk: Police may use force to counter a threat they perceive based on some affirmative act by a detainee; but they may not use force based on a mere risk that a detainee might pose a threat at some future point. Floyd was unconscious and non-responsive. By Brodd’s own stated guidelines, the possibility that Floyd could have regained consciousness and started fighting the police was a remote risk, not a realistic threat, when he was prone on the ground, cuffed behind the back, unconscious, and pulseless.

The objective of a defense case is supposed to be the creation of reasonable doubt, not the removal of all doubt.