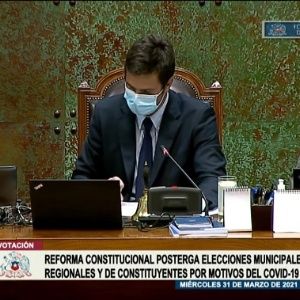 Chile’s Chamber of Deputies approved on Wednesday the bill submitted by President Sebastian Pinera to postpone municipal, regional and constituent elections to May 15 and 16 due to the COVID-19 pandemic.

The bill was passed with 126 votes in favor, three against, and 11 abstentions. The elections were initially scheduled for April 10 and 11. Moreover, the second round of governor elections was postponed for June 13, while the partisan primaries for the presidential elections are expected on July 18, 2021.


“In discussion of extension of #Elections2021CL in the.
@Camara_cl, we voted q until 16/05 can only operate trade considered essential, independent of the step-by-step plan, apropos of the large number of workers circulating in quarantine. We did not achieve quorum [1/2].”

In April the Chileans will determine the 155 members of the constitutional convention who will write the new Carta Magna. The bill also included delaying the electoral campaign until April 29.

Although Chile has the fastest vaccination rate globally,  the country has seen an upsurge of COVID-119 infections recently, reporting up to 7000 cases in a day. The Health Ministry estimates that with the new dates, at least 50 percent of the population will have one dose of the COVID-19 vaccine, about eight million people by the time of the elections.

Dems: The Secret History of the Shadow Campaign That Saved the...