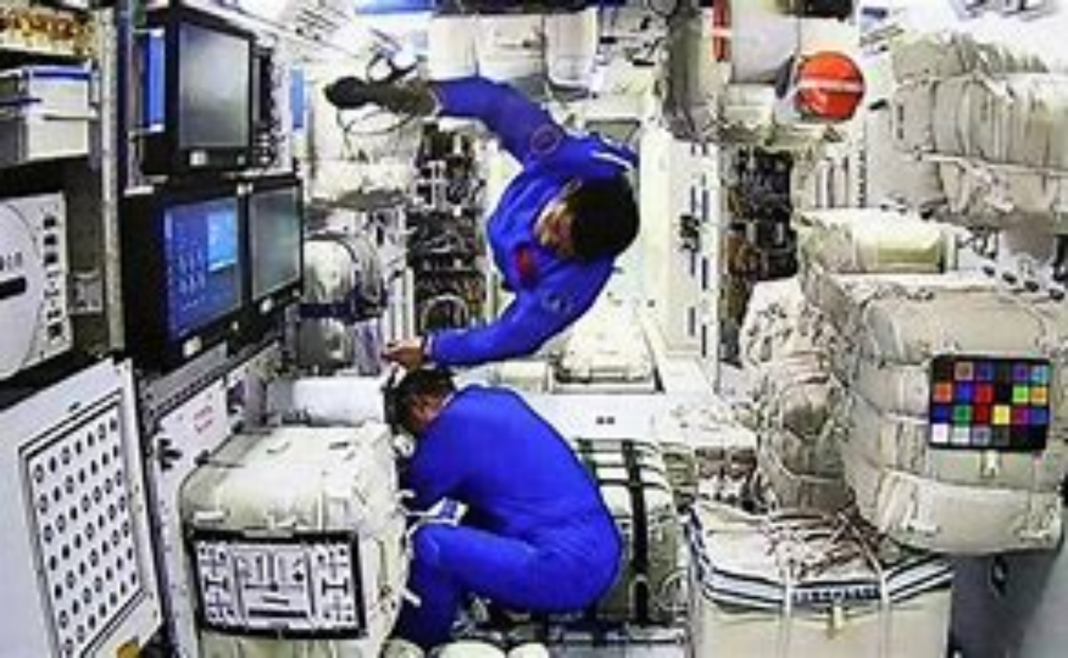 JIUQUAN, China — Three Chinese astronauts have begun making China’s new space station their home for the next three months, after their launch and arrival at the station Thursday marked further advances in the country’s ambitious space program.

Their Shenzhou-12 craft connected with the station about six hours after taking off from the Jiuquan launch center on the edge of the Gobi Desert.

About three hours later, commander Nie Haisheng, followed by Liu Boming and space rookie Tang Hongbo, opened the hatches and floated into the Tianhe-1, the core living segment of the station. Pictures showed them busy at work unpacking equipment and at one point turning to the camera to greet and salute audiences back on Earth.

“This represents the first time Chinese have entered their own space station,” state broadcaster CCTV said on its nightly news.

China has now sent 14 astronauts into space since 2003, when it became only the third country after the former Soviet Union and the United States to do so on its own. China’s leaders hope the mission will be a complete success as the ruling Communist Party prepares to celebrate its centennial next month.

Although contact between the Chinese space program and NASA is restricted by U.S. law, NASA Administrator Bill Nelson issued a statement Thursday expressing, “Congratulations to China on the successful launch of crew to their space station! I look forward to the scientific discoveries to come.”

The mission is the third of 11 planned through next year to connect the Tianhe-1 to two laboratory modules and send up crews and supplies. The current crew will carry out experiments, test equipment and prepare for the future missions.

A fresh crew and supplies will be sent in three months. Each crew will have three members, with the station’s capacity at six, when crews are being exchanged. Two of China’s past astronauts were women, and future crews on the station will include women.

Uniformed military personnel and children waving flowers and flags and singing patriotic songs saw off the astronauts before they entered the Shenzhou-12 to be blasted into space atop a Long March-2F Y12 rocket at at 9:22 a.m (0122 GMT) Thursday Beijing time.

The rocket dropped its boosters about two minutes into the flight followed by the cowling surrounding the crew’s craft. After about 10 minutes it separated from the rocket’s upper section, extended its solar panels and shortly afterward entered orbit.

About a half-dozen adjustments helped line up the craft for docking with the Tianhe-1, or Heavenly Harmony, module at about 4 p.m. (0800 GMT).

The travel time is down from the two days it took to reach China’s earlier experimental space stations, a result of a “great many breakthroughs and innovations,” the mission’s deputy chief designer, Gao Xu, told state broadcaster CCTV.

“So the astronauts can have a good rest in space which should make them less tired,” Gao said.

Other improvements include an increase in the number of automated and remote-controlled systems that should “significantly lessen the pressure on the astronauts,” Gao said.

China is not a participant in the International Space Station, largely as a result of U.S. objections to the Chinese programs secrecy and close military ties. However, China has been stepping up cooperation with Russia and a host of other countries, and its station may continue operating beyond the International Space Station, which is reaching the end of its functional life.

Chinese space officials have also said foreigners may be part of future crews on the station after it is fully built next year.

China landed a probe on Mars last month that carried a rover, the Zhurong, and earlier landed a probe and rover on the moon’s less explored far side and brought back the first lunar samples by any country’s space program since the 1970s.

China and Russia this week also unveiled an ambitious plan for a joint International Lunar Research Station running through 2036. That could compete and possibly conflict with the multinational Artemis Accords, a blueprint for space cooperation that supports NASA’s plans to return humans to the moon by 2024 and to launch an historic human mission to Mars.

After the Tianhe-1 was launched in April, the rocket that carried it into space made an uncontrolled reentry to Earth. Usually, discarded rocket stages reenter the atmosphere soon after liftoff, normally over water, and don’t go into orbit.

China dismissed criticism of the potential safety hazard at the time, and officials said the rocket used Thursday was of a different type and reentering components were expected to burn up before they could be a danger.