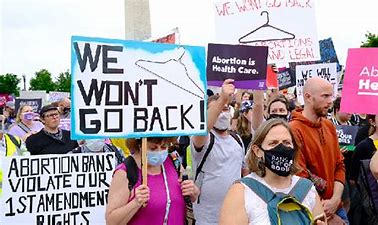 There was an immediate rush of corporate responses to the overturning of Roe v Wade on Friday. Companies want their employees and the rest of the world to know that abortion will be handled within the realm of health care benefits, including taking care of travel expenses incurred, if necessary. Despite what pro-abortion people are saying, abortion is not illegal in America. It’s a state issue now, not a federal issue, and each state will make its own laws.

Companies in the private sector have the right to offer benefits as they see fit. Corporate boards answer to stockholders. As long as stockholders are happy, corporate executives put into place employee benefits to recruit and retain workers. This is all Business 101. For many years, corporate insurance plans would not pay for contraceptives, like birth control pills, but would pay for vasectomies. Go figure.

The entertainment industry has come in strong for including abortion and travel-related expenses in their health care benefits. This isn’t a surprise. After all, we had many actors and some studios boldly stating they would not film in Georgia after the state passed its heartbeat legislation. It’s interesting to note that major studios are now confirming the health care benefits for employees while also remaining silent on the actual ruling sent down by the Supreme Court.

A Warner Bros. Discovery spokesperson said the company is “committed to offering our employees across the country access to consistent and comprehensive healthcare services. In light of the Supreme Court’s recent decision, we immediately expanded our healthcare benefits options to cover transportation expenses for employees and their covered family members who need to travel to access abortion and reproductive care.”

“Paramount will support – as we always have – the choices our employees make about their own health care,” CEO Bob Bakish said in a note to employees Friday, running down a list of benefits that include “certain related travel expenses if the covered health service, such as abortion, is prohibited in your area.”

Disney executives also communicated directly with staff not long after the decision was released by the Supreme Court this morning, we hear, recognizing the impact of the ruling and committing to quality and affordable care for all staffers no matter where they live or if they need to travel.

Netflix said it already offers a travel reimbursement coverage for full-time U.S. employees and their dependents who need to travel for cancer treatment, transplants, gender-affirming care, or abortion through its U.S. health plans. This is a $10,000 lifetime allowance per employee and their dependents per service.

NBC Universal parent Comcast declined to comment but we understand has a travel benefit for both Comcast and NBCUniversal employees that includes all covered medical services and procedures that aren’t available near an employee’s home.

And Sony shared with all SPE employees in the U.S. that its medical plans through Aetna provide comprehensive care — including reimbursement for travel if it required to access services available. “The Sony group of companies believes employees and dependents should have equal access to health care and medical services, including reproductive healthcare, regardless of their location,” it told staffers.

Plenty of real-world companies are weighing in, too. Dick’s Sporting Goods President and CEO Lauren Hobart made the announcement in a social media post on LinkedIn. She emphasized the travel expense reimbursement benefit for those living in states that restrict abortion.

“In response to today’s ruling, we are announcing that if a state one of our teammates lives in restricts access to abortion, DICK’S Sporting Goods will provide up to $4,000 in travel expense reimbursement to travel to the nearest location where that care is legally available. This benefit will be provided to any teammate, spouse or dependent enrolled in our medical plan, along with one support person,” Hobart said.

“We recognize people feel passionately about this topic — and that there are teammates and athletes who will not agree with this decision. However, we also recognize that decisions involving health and families are deeply personal and made with thoughtful consideration. We are making this decision so our teammates can access the same health care options, regardless of where they live, and choose what is best for them,” she added.

Some companies are confirming the benefits available to employees without other comments.

Alaska Air Group (ALK.N), parent of Alaska Airlines, said on Friday it is “reimbursing travel for certain medical procedures and treatments if they are not available where you live. Today’s Supreme Court decision does not change that.”

Others weigh in with an activist approach.

OkCupid sent in-app messages to customers in 26 states likely to ban abortions, gearing up for a political fight. “Act now by calling your representatives and demanding freedom and choice,” said a copy of the message tweeted by OkCupid Chief Marketing Officer Melissa Hobley.

Yelp co-founder and Chief Executive Jeremy Stoppelman on Friday said the ruling “puts women’s health in jeopardy, denies them their human rights, and threatens to dismantle the progress we’ve made toward gender equality in the workplace since Roe.”

In May when Justice Alito’s opinion draft was leaked, some companies came out then to offer to pay travel expenses as part of their health care benefits.

Yelp (YELP.N), Microsoft Corp (MSFT.O), and Tesla (TSLA.O), said they would help cover the cost of travel for employees seeking reproductive services. Apple (AAPL.O) repeated that it supported employees making their own decisions on reproductive health and that its healthcare covered travel for services unavailable nearby.

There’s always something to criticize corporations for when they choose to fly their woke flag over the political issue of the day. Many experience serious backlash from customers who don’t want to be lectured to on political or social issues by retailers or entertainment bigwigs. Get woke, go broke. But, in the case of treating abortion as a health care issue within a company’s employee benefits, it’s no skin off my nose. I just don’t want taxpayers on the hook for abortion and travel costs. If shareholders learn that a company is moving one way or the other and object, they can either sell their stock in the company (looking at you, Disney) or take it up with the corporate board. Companies are free to act accordingly.

What does BLM stand for?