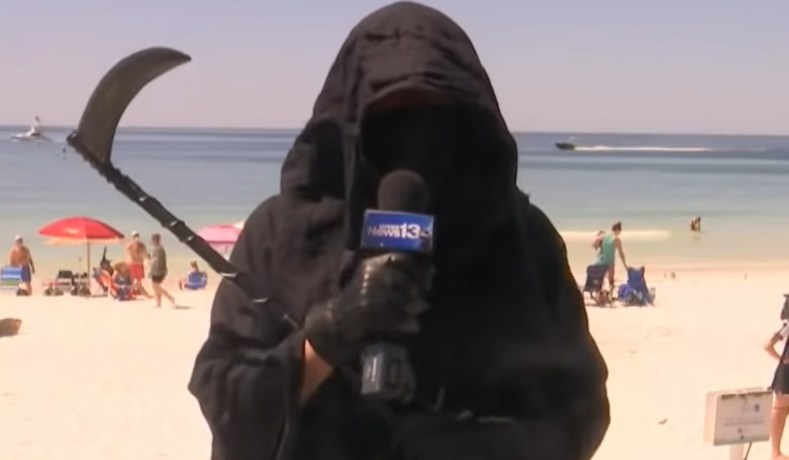 Last spring, you probably saw the national news coverage of Florida lawyer Daniel Uhlfelder, who liked to dress up as the grim reaper and tell Florida beachgoers that they should stay home, and that they were placing their lives at risk by going to the beach . . . outdoors . . . in sunlight . . . with wind, and usually being six feet or more from other beachgoers. Most doctors, epidemiologists, virologists and public-health experts were fine with people going to the beach, as long as they attempted to maintain social distancing.

The national media coverage of Uhlfelder was pretty friendly, considering how extreme his position was. And last year, Uhlfelder filed a lawsuit, attempting to force Governor Ron DeSantis to close the state’s beaches.

The judges on Florida’s First District Court of Appeal were not merely unpersuaded; their ruling offered a blistering denunciation of Uhlfelder for wasting the court’s time and failing to make a legal argument, as opposed to a political one.

Baseless and personal attacks of an opponent may be commonplace in the political arena, but such attacks have no place in a court of law. Appellant and his counsel are officers of this state’s courts; they knew or should have known that their “demands” that the Governor “close the beaches” were not validly asserted below or on appeal because those demands were prohibited under Florida’s strict separation of powers. . . . There was no good faith legal argument to support a claim for such relief in the trial court, and there was certainly no good faith basis to argue legal error on appeal. Appellant and his counsel undoubtedly used this court merely as a stage from which to act out their version of political theater. This was unprofessional and an abuse of the judicial process.

That order, written by Judge Brad Thomas and Judge Adam Tanenbaum, encouraged Florida’s State Bar “to take appropriate action to ensure that Appellant and his counsel understand their ethical obligations and proper roles as officers of the court. To the extent determined necessary, we also encourage The Florida Bar to require Appellant and his counsel to undertake additional educational training the Bar may deem appropriate to ensure that Appellant and counsel comply with their ethical and professionalism obligations.”

The third judge in the panel, Judge Susan Kelsey, added, “I concur in the holding that Appellant and his counsel used the appeal process improperly and unethically, and that sanctions are warranted. I would also impose significant monetary sanctions.”

Will any of the national publications that wrote friendly profiles of Uhlfelder last year update their viewers or readers on the status of his argument? Or is this destined to become another quickly passing story with no follow-up?