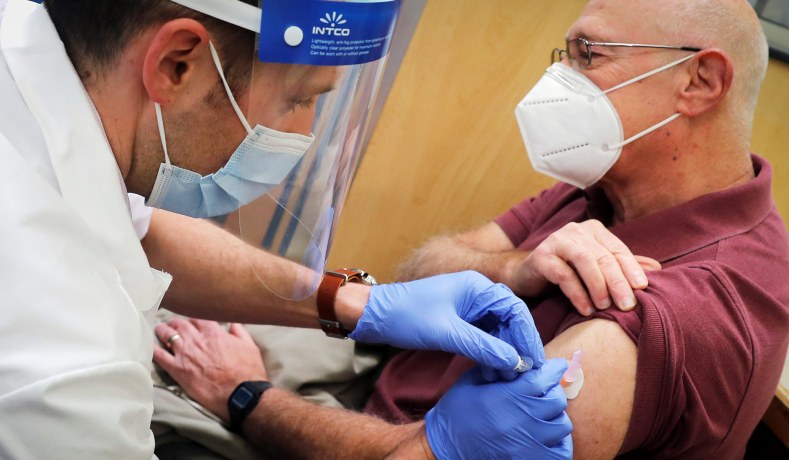 An odd alliance has developed over the last few months between those reticent to ever return to normal life and skeptics of the coronavirus vaccines. Both have been unjustifiably confident that the vaccines would do little to stop transmission of the disease from one person to another. It was never an idea that made much sense, but it nevertheless gained traction with both those who would keep schools closed — such as Ron Klain, Jen Psaki, Joe Biden, and their patrons in the teachers’ unions — and those who have sought to undermine the benefits of the vaccines more generally, such as former New York Times reporter Alex Berenson.

This myth is mainly a product of motivated reasoning, and was made possible by the fact that both Pfizer and Moderna’s products are a new kind of vaccination that use messenger RNA (mRNA) rather than a strain of the disease itself. Essentially, the vaccine teaches your body to attack the disease by having your body produce a protein found on the virus. The newness of this technology has aroused an understandable fear in some and empowered conspiracy theorists to fan the flames of these fears. It has also resulted in the idea that for some unknown reason, mRNA vaccines would not at least slow down transmission of the disease the way that every other vaccine of communicable diseases does. Again, this was a flimsy theory and the product of motivated reasoning: Why wouldn’t a vaccine that does the same thing every other vaccine does — teach your body to fight a particular disease — mitigate transmission?

Thankfully, we now have some hard data to put away this myth. Data from a study conducted last year suggest that people with lower viral loads are far less likely to pass the disease on to those they come in contact with than those with higher viral loads. This stands to reason; people who have less of the disease in their body are less likely to give it to others. A second study then shows that even among those who do get sick after getting vaccinated, the vaccine substantially lowers their viral load, thus rendering them less likely to get others sick as well. And this is in addition to the primary way that the vaccine stops spread: its 94 percent effectiveness rate. If you don’t get it, you can’t pass it on! In the words of Dr. Anthony Fauci, who on Wednesday pointed to the studies, getting vaccinated is “not only good for you and your family and your community, it will have a very important impact on the dynamics of the outbreak in our country.”

By uncritically buying into the theory that the vaccines would not mitigate transmission and insisting that people continue to adhere to strict social-distancing rules even after they’ve received the vaccine, the Biden administration has not only ignored “the science,” it has undermined its stated objective of getting the vaccine in as many Americans as possible, as fast as possible, and unwittingly aided vaccine critics. It’s time for the Biden administration start focusing its efforts on serving the American people, and not the American Federation of Teachers.