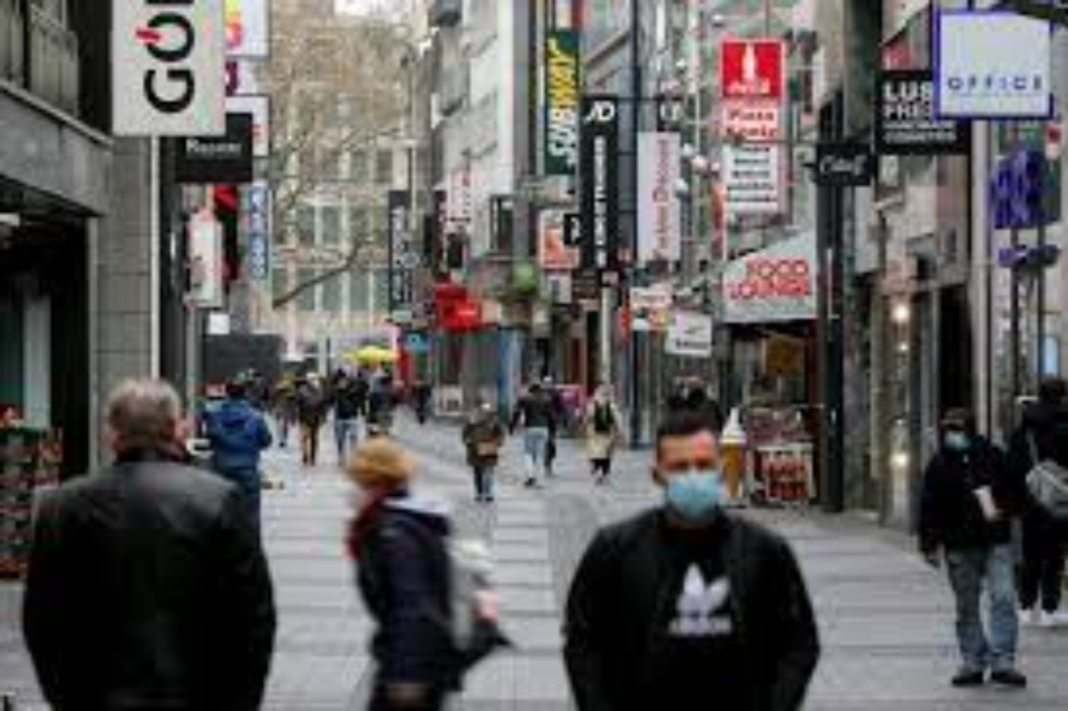 From a distance, the high-rise buildings look like a spacecraft that took a wrong turn and landed in the middle of a green field in one of Cologne’s southern districts. The concrete behemoth on the outskirts of the village of Meschenich is home to around 4,000 people from 60 different countries.

On Friday, many of the residents got up bright and early and headed in small groups — white consent forms and yellow vaccination certificates firmly in hand — down to the Caritas Center. A line had been forming outside the brick building since 8 a.m.

“I want to get vaccinated so that I can feel safe again,” said 42-year-old Sahin Aydogan. “We live here in an area where everything is so cramped. In the elevator, in the stairwell and when you’re shopping you’re afraid you’re going to get COVID.”

The Kölnberg high-rise complex has been hit hard by the pandemic. Aydogan told DW he knows many people who’ve had COVID-19, adding that physical distancing is difficult in a place where many people live in poverty and families with four children live in tiny apartments no bigger than 50 square meters (about 530 square feet). Many of the area’s residents are recent arrivals in Germany, which makes it even more difficult to navigate the array of coronavirus regulations.

“Many people here live in very precarious conditions,” said Michael Kliem, a local doctor, peeling off his protective suit and face mask. Kliem is responsible for carrying out the vaccinations in the area on this day, together with the Catholic welfare organization Caritas and the city of Cologne.

Normally, young people with no preexisting health conditions would have to wait their turn before being eligible for a vaccine. But the city of Cologne has said it wants to vaccinate as many people as possible in districts with extremely high infection rates, and it has obtained an exemption — and the necessary doses — to do so.

These efforts are part of a citywide pilot project aimed at preventing a bad situation from getting even worse, and other cities plan to follow Cologne’s lead. “This is helping us to contain the infection rate,” said Kliem. “We’re happy that our patients are showing up.”

‘BioNTech is the best’

Angelina, 19, who doesn’t want to give her last name, is one such patient. “I don’t want a shot because of vacation or anything like that, I just want to feel safer,” she said. “Many people here don’t wear a mask and don’t follow the rules. Working in a store, I see it all the time.” 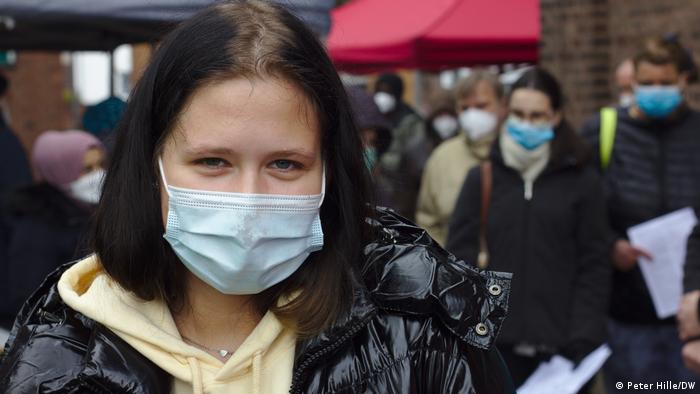 As a store employee, Angelina has been forced to come in close contact with the public

Angelina will be receiving the Johnson & Johnson vaccine, and she’s quite happy about it. “That’s good, because you only need one shot,” she said. The strengths and the weaknesses of the different vaccines are a topic of conversation among those waiting for their shot — as if they were comparing soccer stars. “BioNTech is the best one,” said a young guy in a gray hoodie. “Even better than Moderna,” agrees another, also wearing a gray hoodie. And AstraZeneca? “It’s OK, but not so great.”

But a little later, some of the patients begin to get restless. They were all expecting to get immunized today, most of them with the Moderna vaccine. But only certain residents are eligible — and only for the Johnson & Johnson version. With so much pressure to vaccinate as many people as possible, the Caritas volunteers spontaneously ask anyone who wants a vaccine to opt for the AstraZeneca vaccine instead.

“Then I’d rather come back again tomorrow,” said Hediye Batici, as she leaves the line. “I’ve done some research and want BioNTech. After all, I’m only 47 years old.” The vaccines from AstraZeneca and Johnson & Johnson continue to have a bad reputation in Germany, with many people quite worried about symptoms such as rare blood clots.

‘Those who leave now won’t be back tomorrow’

Amir Rakhsh-Bahar, a local social worker, is dismayed. “My colleagues and I helped people to fill out 150 applications,” he said, indicating the vaccine consent forms. “But all for Moderna. Now they can all be thrown away.”

Rakhsh-Bahar has worked at the youth center across the street for the last 11 years, has already been vaccinated — and he recovered from a bout of COVID-19 six months ago. He’s annoyed by the uncertainty when it comes to the safety of specific vaccines. “Those who leave now won’t be back tomorrow,” he said. 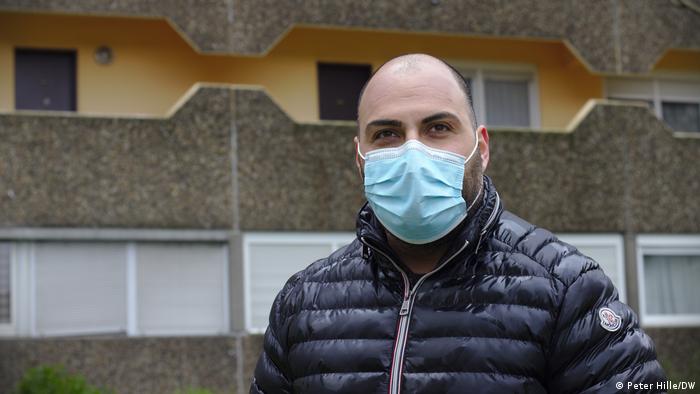 The 33-year-old has lived in Kölnberg for years and knows almost everyone here. “That’s where I grew up,” he said, pointing to a balcony on the fifth floor. Suddenly, a bag of trash crashes to the pavement, thrown from an apartment higher up. “Unfortunately, that’s normal here,” he said. “This shouldn’t be an excuse, but it takes some 20 minutes to bring the garbage down. And now people are afraid that when you ride the elevator, someone is going to give you COVID.”

The Kölnberg complex is the kind of disadvantaged neighborhood found in almost every major German city. It’s the location of choice for TV producers when they’re looking for a backdrop for a made-for-TV movie about drugs, gangs and prostitution. There’s a stigma attached to anyone who lives here.

But Rakhsh-Bahar and his colleagues at the youth center want to make sure that the children of Kölnberg still have something to look forward to. Before the pandemic, they would often play games with the kids, help them with their homework and provide them with warm meals.

And during the pandemic? “Our goal now is to at least make sure they get help with their homework,” said Rakhsh-Bahar. “It’s very painful when you have to tell an 8-year-old that they can’t come to play. You don’t have the heart to tell them that. But it’s all about their basic needs now.”

Nasir Hassan Khalef and two of his children are standing outside the youth center, waiting to pick up some donations of food. The 35-year-old is originally from Sinjar in northern Iraq and has been living in Germany for the past four years. When asked whether he will get vaccinated, he says not possible just now. He, his wife and three of his six children have just recovered from COVID — “headaches, coughing, a runny nose — the works.”

Many people still haven’t been vaccinated

After three hours of waiting in line, Angelina and Sahin Aydogan are now ready for their shots. And after a quick disinfection, injection and adhesive bandage, they’re back outside in the fresh air.

Angelina takes a deep breath, even though she’s still wearing her face mask. “I feel liberated,” she said. “It’s finally behind me. I can look ahead and don’t have to be afraid when I’m at work — like I have been for the last year and a half.” 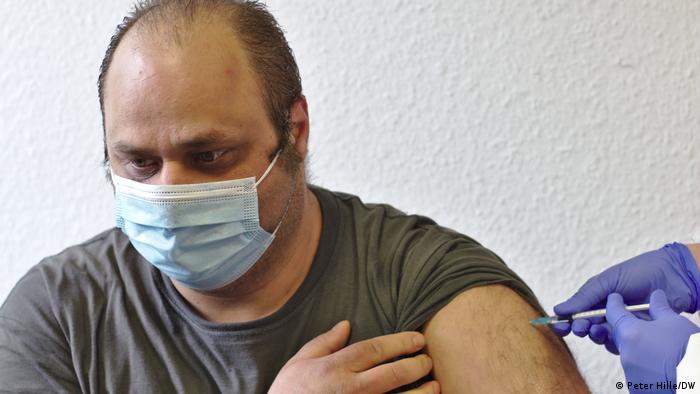 Sahin Aydogan was happy to be getting his COVID vaccine

Aydogan, too, is very hopeful. “I’m currently looking for a job, and because of COVID it is even harder finding one. Maybe I’ve got better chances now that I’ve been vaccinated,” he said. “They should repeat what they did today a few more times, because a lot of people still haven’t been vaccinated.”

But it remains unclear whether Cologne’s pilot vaccination project will continue. Late Friday, the city announced that it was still short on vaccines.